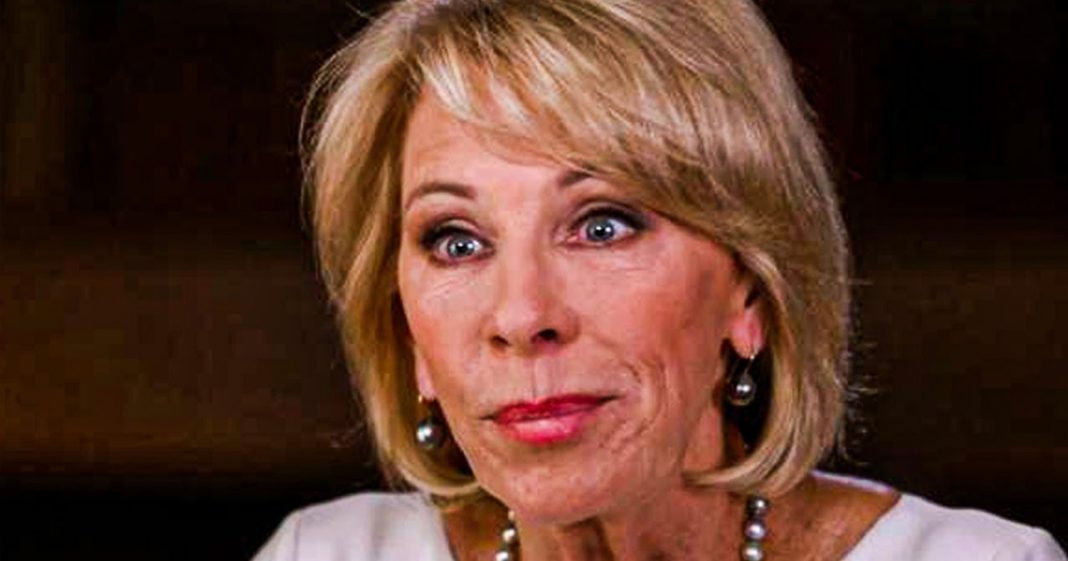 So far at least 75 children have died from Covid-19 since schools across the country began reopening, and Education Secretary Betsy DeVos still had the audacity to declare that this entire pandemic has been great for our public school systems. DeVos claims that the virus forced schools to innovate, but the lack of innovation wasn’t due to laziness – it was due to a decades-long lack of funding. Ring of Fire’s Farron Cousins explains what’s really been happening at our public schools because of people like DeVos.

In an interview that aired on Sirius XM this past Friday education secretary Betsy DeVos actually said that the pandemic has been a good thing for the public school system here in the United States. And she believes it’s been a good thing because it has forced these schools that are just so far behind the times. It is forced them to finally innovate. Here’s the exact quote from education secretary, Betsy DeVos. I think this pandemic is a good thing because I think it’s going to really force changes that should have happened many years ago. And most of that’s going to happen when families themselves are empowered to make those choices. And those changes in those decisions. So not only is she saying that it’s, you know, forcing schools to finally innovate and upgrade and update, uh, but also, you know, it’s going to let families know how crappy public schools are so they can make the choice to send their kids to private schools, charter schools, you know, the schools that Betsy Davos actually has a financial stake in. So she’s glad this happened.

Because she gets to make more money off of it. That’s what this boils down to folks, because with every member of this administration, it always comes back to how can I profit off of whatever the hell is happening in the country today? And Betsy DeVos thinks she found hers. That’s why she’s out there giving interviews like this. Here’s the reality. Yeah. The pandemic has forced schools to innovate. It’s forced them to have to think on their feet in a way that they never thought they would have to do. It has forced them to become far more versatile than they were ready to become, but they did it. They pulled it off and they pulled it off with almost no resources. That’s the phenomenal thing, by the way, that’s also the reason why they weren’t able to do this in the past. Betsy, it’s not because schools were lazy.

It’s not because they just didn’t think it was necessary. It’s because for decades, Republicans have starved our public education system of the funds that they need to properly function. And Democrats have been more than willing along the way to, you know, go, go with that too. But this was Republican plan. This was Republican policy all the way back in the Bush years, right? No child left behind. Let’s put, uh, all these stringent standards on these school districts that we know the poor school districts aren’t going to be able to make. And then they’re not going to be able to get funding, but then we’re going to push through this voucher program. That’s going to use federal money instead of going to public schools, they’re going to get to go to private schools to put more money in the pocket of people like Betsy Devoss, ah, see how it all comes full circle folks. That’s what this is. That is part of the reason we’ve had this attack on public education in the United States for so, because you’ve got all these Republican donors, all of these Republican cronies, like divos who have a stake in it, a financial stake in it.

We have been doing children in this country, a disservice since, you know, basically since I was in school, schools have been underfunded. Teachers have definitely been underpaid and undervalued and they have emerged as one of the unsung heroes of the pandemic. You know, rightfully we do give a lot of credit to the first responders to the, to the medical field. Those people do deserve our praise and our admiration for what they’ve done during this pandemic. But so do the teachers, I mean, let’s not forget schools across the country were shut down with about 25% of the school year or 20% of the school year, at least still left to go last year. They had to suddenly figure out a way to continue teaching their classes without ever going back into their classroom.

That’s pretty remarkable as someone who’s married to an educator, I saw first hand how difficult that was as somebody who had to teach their kids from home. I got to finally experience how difficult it is to sit there and wrangle these kids and teach them these concepts without losing your patience every five seconds. And Betsy DeVos has the audacity to go out there and say, thank God the pandemic happened. Otherwise we would never have had these great innovations. And also at the same time showed how dysfunctional the public school system is. So parents can finally choose to send their kids to a school that maybe I’m invested in. No teachers deserve all the praise. Betsy Davos deserves to be thrown out on her, but because of how lazy and incompetent and corrupt that woman truly is.