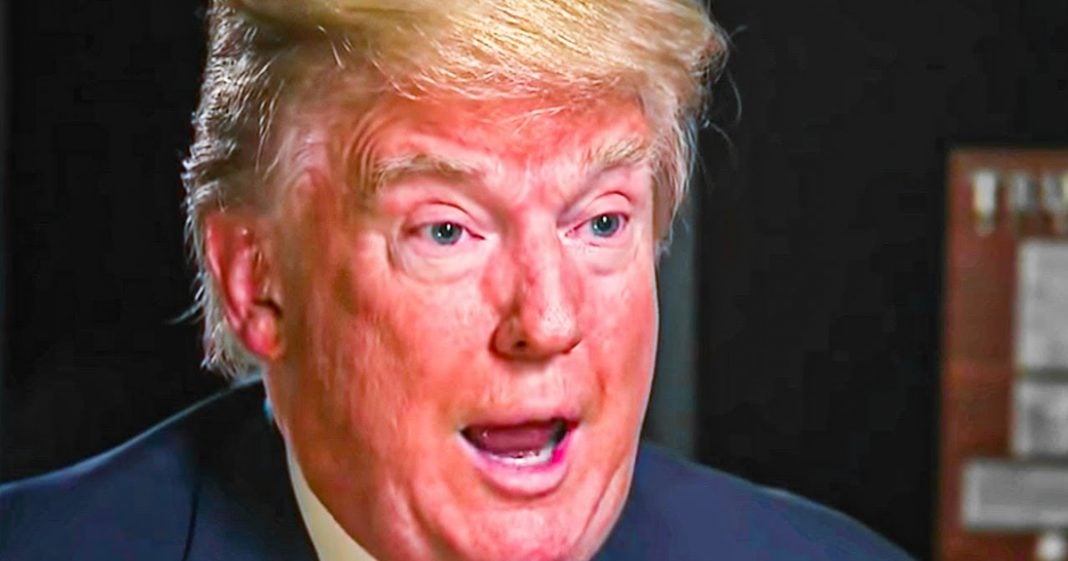 A report by the Coronavirus Task Force reveals that Donald Trump KNEW how deadly the pandemic was, and that it was getting worse, while he was also saying publicly that the whole thing was going to disappear very soon. The President didn’t do his duty to the American people, and there were untold numbers of dead Americans as a result of him hiding this information and lying to the public. Ring of Fire’s Farron Cousins discusses this.

On Monday, the house select sub committee on the Corona virus crisis, uh, released a series of briefings that Donald Trump had received from the coronavirus task force. These were private briefings that were not made public until this house select subcommittee decided to release them on Monday. Uh, these are briefings that spanned from June 23rd through August 9th. So these are very recent. They span most of the summer and they reveal the Donald Trump lied to the public all throughout the summer about how bad the crisis really was. Let’s not forget throughout this entire summer, as we saw our numbers going through the roof, Donald Trump told us one, this whole thing was just going to disappear. Probably pretty quickly told us that it was totally safe to send our kids back to school. We needed to send them back to school. And that the only reason we’re seeing big numbers is because we’re doing big testing. The committee released several reports and here we are from common dreams. They actually put these together with, uh,

Oh actually, I’m sorry. This is from the press release of the house coronavirus sub committee. They put together the briefing of that day, along with what the president said that particular day to downplay what was happening here in the United States. Here’s a few highlights and this is a printed and pro in common dreams from the house subcommittee report, June 23rd, vice president Pence claimed than an op ed that the panic over resurge of, of coronavirus infections was overblown. But the white house task force concluded that seven States were in the red zone indicating the highest risk of coronavirus spread July 14th report. Uh, Trump stated publicly no other country tests like us. In fact, I could say it’s working too much. It’s working too well. We’re doing testing and we’re finding thousands and thousands of cases. The same day, the tax task force concluded 19 States were in the red zone and recommended increased testing.

Uh, July 26, Trump tweeted, you will never hear this on the fake news concerning the China virus, but by comparison to most other countries who are significant or suffering greatly, we’re doing very well. And we have done things that few other countries would have done. Uh, July 26th, the task force also said, uh, 22 States were in the red zone and stated quote, Georgia is experiencing widespread community spread without evidence of improvement. Improvement will require much more aggressive mitigation efforts to change the trajectory of the pandemic. And Georgia similar thing happened on August 2nd and August 9th. Here’s, here’s what this means. Basically, every time the president was privately given a report saying, Holy crap, things got so much worse. Every time that happened, he went out publicly and said, wow, things are so great in this country. Look at this. We’re doing great. There’s nothing to worry about.

The cases are only up because the testing is up. Meanwhile, the taskforce is in his ear saying, Holy crap, dude, you got to increase testing in these areas. We got to send more tests. We need to find out how many people have this. Cause it’s spreading like wildfire. Now here’s the kicker to all of this folks. Do you know what has happened in the last month or so? The federal government has reduced testing. They’ve done this by cutting off the funding for testing. So there’s fewer areas with federally subsidized testing. Um, I know in my area, we actually went from having like four or five test centers and we’ve got a population of only like 20,000. Uh, there’s no one. You actually have to leave this town to go to a different town to go to that hospital. And they do it. Cause all the other testing centers have been shut down or they’ve reduced their hours to only be open for two hours per week. And that’s why the number of cases in places like Florida has dropped from 10,000 a day to 3000 a day. Hey, those numbers look great, right? Well, it’s not because we’re controlling the virus. It’s because we’re controlling telling people they have the virus by not letting them get tested and that’s happening all over the country. The pandemic has not gone away. It simply has not. We’re seeing lower numbers now because we’re doing less tests. I had Trump’s Trump’s own logic there. But the fact is he has been lying to us throughout the entire summer.

And some of the lies that he tells sure about how great the economy is. Yeah. That doesn’t really hurt anybody. These lies do. And the house select subcommittee was, was quick to point out that over this time period, when Trump was lying to the public about what was really happening and additional 58,058,000 Americans died, Trump lied 58,000 Americans died as a result of it. Four died and Ben Gazi. And we had years of investigations and hearings on that for people, but an extra 58,000 dying from Donald Trump’s repeated lies to the public Republicans have no problems with that. Y’all going to keep calling yourselves the pro-life party as you’re actually actively letting tens of thousands of people die unnecessarily because you don’t want to go against the orange freaking the white house. So pro-life of you. So Christian of you, you’d better hope that this religion that you use to get yourself elected you better hope it’s all fake because if it’s not, I gotta, I gotta some real bad news for you about where you will be spending eternity for what you’ve been doing, not just throughout your whole careers, but primarily for what you’ve done. Just the last three months alone. That is a hell worthy trespass. If I’ve ever seen one.