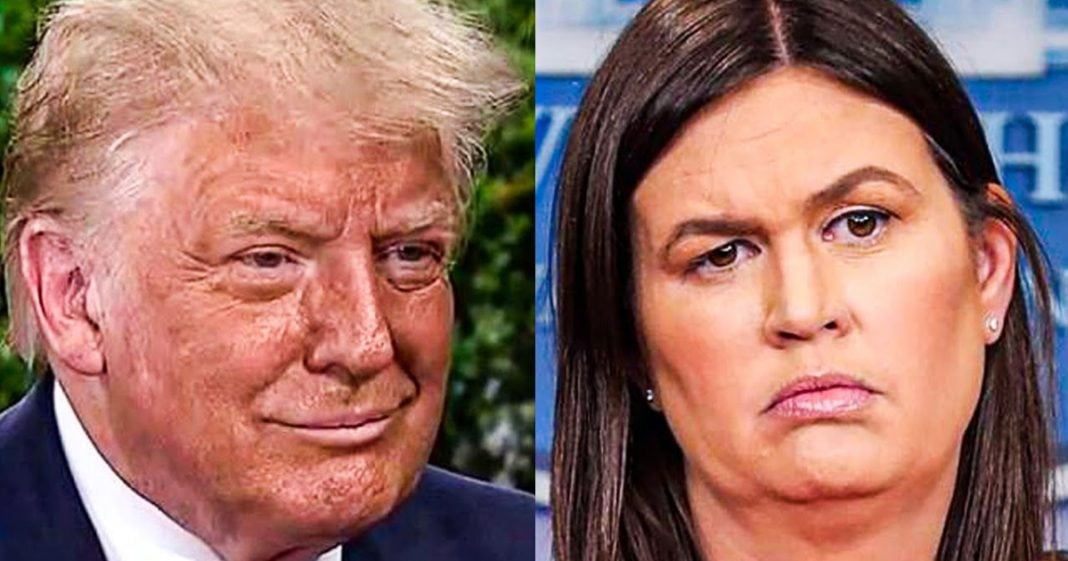 According to Sarah Huckabee Sanders, Donald Trump and former Chief of Staff John Kelly jokingly encouraged her to sleep with North Korean dictator Kim Jong-un following a meeting in 2018. Apparently the North Korean leader was quite taken with Huckabee Sanders, giving her a wink in the middle of his talks with Trump, and the President and his staff didn’t waste a minute to humiliate the press secretary over it. Ring of Fire’s Farron Cousins discusses this.

According to a forthcoming memoir from former white house, press secretary, Sarah Huckabee Sanders back in 2018, she attended a meeting with Kim Jong Un Donald Trump. Uh Trump’s then chief of staff, John Kelly, and during the meeting and Huckabee Sanders own words, Kim Jong Un winked at her was in the middle of a conversation that Kim and Donald Trump were having. They were talking about things like sports. She says, and then she happened to look up from what she ever she was doing, uh, and noticed that Kim Jong UN was staring at her. And as soon as the two made eye contact, he winked at her. And of course, Donald Trump and, uh, John Kelly did not waste any time on their trip, back home, encouraging her to quote, take one for the team and sleep with him. Now, she kind of makes it sound like they may have been joking, but she definitely makes it sound like the entire exchange made her incredibly uncomfortable. Um, I have to read some of the excerpts here. And these are from her book. Book is called speaking for myself. Uh, guardian obtained, a copy of it. They wrote about this. Here’s some of the quotes, uh, Kim Jong Un hit on you. Trump told me he did. He effing hit on you. And this was on the trip back. Um, sir, please stop.

Well, Sarah, that settles it. Trump said you’re going to North Korea and taking one for the team. Your husband and kids will miss you, but you’ll be a hero to your country. Uh, Sanders said the president and his chief of staff howled with laughter as they drove on. And I included her saying, sir, please stop. Because that is important. Now here’s the thing. Sarah Huckabee Sanders got paid for a couple of years to straight up lie to the American public. Is she telling the truth about this encounter? I don’t know. I honestly, I can’t even give her the benefit of the doubt at this point because that woman has been so dishonest, but this does, I will say kind of fall in line with behavior that we have heard of and seen from Donald Trump in the past. So the story is absolutely plausible, whether or not it actually happened is a completely different story.

But the reason I included the sir, please stop is because it does paint a picture of a woman who was behind the scenes, a victim herself. I know she lied to us. She was a horrible person, but she was also treated in a way that no woman should ever have to be treated at any job anywhere. Anytime, you know, talking about her in a sexual way, that makes her uncomfortable. That is not acceptable yet. That is clearly what was happening, uh, on this drive back to the, the, the airfield to go home. They wanted to humiliate her sexually by talking about her being with Kim Jong on, by talking about him, having a crush on her. And by pointing that out how ridiculous it is that he does

That, that kind of behavior is inappropriate. It’s inappropriate for the average workplace. And it’s dang sure, inappropriate to be happening with the president and his chief of staff. Again, that is assuming what Sarah Huckabee Sanders is saying did, in fact happen, as I mentioned, the problem is we’ve got a whole boy who cried Wolf situation right here. She has told us so many lies for so many years, whitewashing, everything this administration did. And now she comes out with a story where she is the sympathetic character, where she is the victim, where she is the one being picked on. But unfortunately she destroyed her credibility so much that even though we want to feel sorry for, we have to question whether or not we’re just being duped by a professional liar yet again.