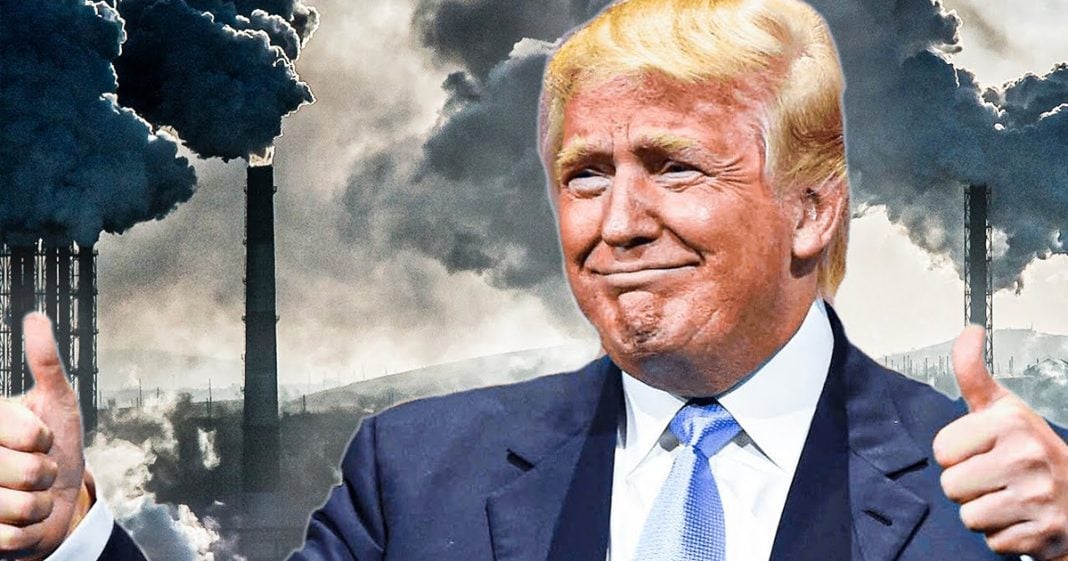 The Trump administration has put forward a new proposal that would make it easier for fossil fuel companies to receive permits to drill in preserved National Forests in the United States. This is a brazen attack on the environment by the administration, and it serves a need that simply doesn’t exist at the moment. The President claims we have so much oil that we don’t know what to do with it, so why should we risk these pristine national forests for a few more drops of oil? Ring of Fire’s Farron Cousins discusses this.

Most of the damage that has been caused by the Trump administration over these last four years is reversible. Some of it takes a little bit more time than others, but most of it can be undone in the term of a president that follows him assuming he loses in November. But there is one area where Donald Trump has caused so much damage that it can not be undone by just the next administration. And that is with the environment. We have seen this man come in and dismantle every single rule and regulation that Barack Obama and his administration had put in place that made our air a little bit cleaner, our water, a little bit clearer and our environment just a little bit better. And this past Monday, Donald Trump took it to a new extreme. In addition to announcing last week that he was preparing to open up parts of the Arctic to oil drilling on Monday, his administration through the national park service released a new set of rules that would spotlight expedite, Right? The permitting process for oil and gas drillers in America’s national forests, not national parks, national forests. So these areas of Woodlands that have been protected and preserved, basically left untouched. Other than people casually strolling through. For hundreds of years,

He says the hell with it. Let’s make it. So these oil companies can get in there faster. They can get their permits, they can start drilling. They can get that delicious, sweet, crude oil or natural gas or whatever it is underneath these forests. They can get it out and get it into our country. It’s the same president who not that long ago, by the way, told us that we had so much, we have so much oil and gas. You know, we have to lift the export bans. We’ve got to get this stuff shipped out overseas. Cause we have more than we could use. He told us, but now he wants to sacrifice even more parts of the environment, parts of the environment that have remained untouched for hundreds of years

So that we can exploit them. I know that we can continue to feed our addiction to fossil fuels and in his case, his addiction to money because he wants to run the government like a business. If he sees anything that the government owns, that he thinks he can make a dollar off of, he is going to do everything he can to make the dollar without ever considering the expenses that we incur as a result of it. And to be honest, that seems to be the problem with American capitalism to begin with. Right? We have seen that with far too many of our corporations here. Nobody ever looks more than three years down the road anymore. In fact, that actually happens to be the average tenure of a CEO here in the United States is three years, 40 years. The average tenure of a CEO is about 18 years. So they had to think long term.

They had to look further down the road, but not today. And certainly not for the president of the United States. He doesn’t have to look down the road. Donald Trump is no longer going to be on this planet when the worst effects of climate change really start showing themselves. And we’re already seeing quite a few of them now. And all the experts tell us that within 10 years, it’s only going to get so much worse. And it’s likely just simply based on actuarial tables to Trump, isn’t going to be here anymore. And because of his wealth, he really never be in a position where he has to deal with that kind of stuff. The rest of us will drilling in these national forests is only going to expedite that. And that’s why I say this is one of the things, his, uh, entire assault on the environment. This is one of those areas that can not just be undone by the next president, because when you release these toxins, when you burn more fossil fuels, when you continue to push those out in the atmosphere, that’s not going to be undone by simply reducing the amount by the next guy. That stuff builds up. And it takes a very, very long time for it to go away, but we can do it. We have the technology, we have the resources, we just don’t have the courage to finally kick our fossil fuel addiction for good.