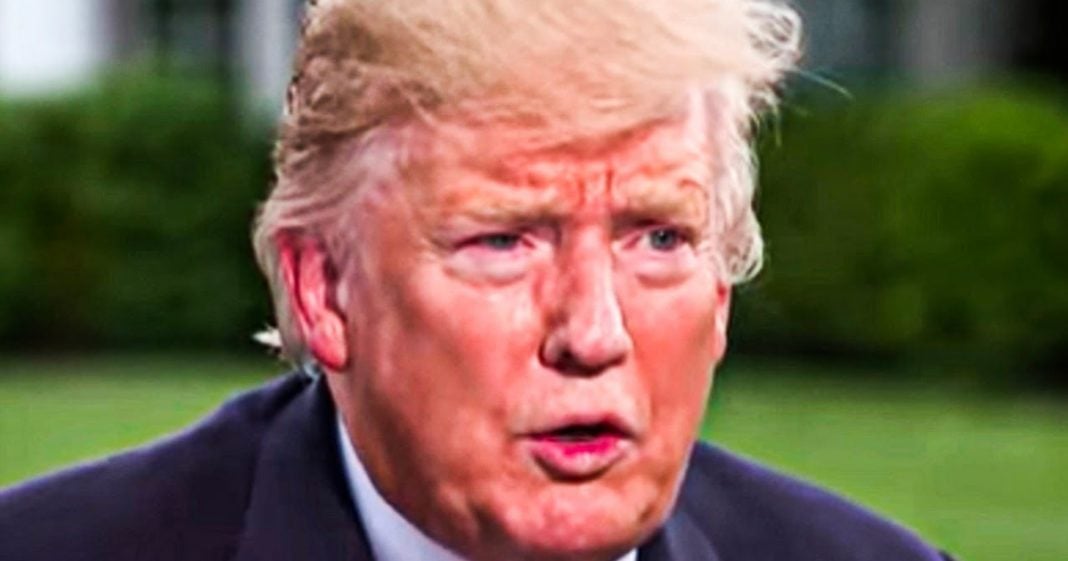 Last year, Donald Trump was urgently taken to Walter Reed Medical Center and the public has been left to wonder why for nearly a full year. But according to a new book, the situation was so dire that Mike Pence was told to be on standby in case he needed to be immediately sworn in as President. The current hypothesis is that the President suffered a series of mini-strokes, which could explains a lot about his behavior. Ring of Fire’s Farron Cousins discusses this.

Last year, seemingly out of nowhere, Donald Trump was rushed to Walter Reed medical center, uh, for undisclosed reasons. And according to new, a new book by New York times, correspondent Michael Schmidt, it was so dire that vice president Mike Pence was allegedly told to be on standby beyond the ready cause there’s a good chance. We’re going to have to swear you in as president of the United States, we don’t know if Trump is going to make it is what that means. Pretty serious accusation there, you know, pretty serious claim, possibly pretty serious health condition. Obviously, if they think you’re not going to pull through the night and they need the vice president on standby to become the next president, after all the public never got any kind of a explanation as to why Donald Trump went to Walter Reed, he remained relatively hidden for the days, following that trip to the hospital. And here we are a year or so later, we still don’t have an answer. And Michael Schmidt comes along and says, Hey, here is what we’ve been told actually happen. So of course, as soon as this news broke yesterday, Donald Trump gets on their Twitter and he says the following, he says, it never ends. Now they are trying to say that your favorite president may went to Walter Reed medical center. Having suffered a series of many strokes, never happened to this candidate, fake news.

Nobody, nobody said you had many strokes though. Dude, nobody said that. And they just said, you, you went there and you could have died then out of nowhere, you’re like, I didn’t have the many strokes that you’re saying I had, nobody had said you had it. You kind of just, uh, you kinda just did that yourself. Um, with, with your denial there, he kind of said, what, what may have actually happened to you for no reason? Uh, here’s the thing. There have been plenty of videos that have emerged over the last year. A lot of them actually fairly recently, uh, saying that Donald Trump may have had a stroke, right? His inability to walk down the very gentle slope, cause it was slightly slippery. And in fact, actually I think the video shows that it was actually fairly dry. Nevertheless, he couldn’t walk down. It there’ve been others where he’s been walking and he’s been kind of dragging his foot. That’s not how he’s walked in the past. That’s not how he usually walks. So a foot dragging is something that a medical professional would look at and be relatively concerned about it. It’s also something that wouldn’t be uncommon in somebody who has had a stroke or in this case, a mini stroke, obviously a full stroke could lead to a complete loss of, you know, uh, certain parts of the body side of the body, whatever it is, many stroke might make it, you know? Um, no, Always prominent, but nevertheless, he has exhibited symptoms of having these many strokes that he swears he didn’t have and that nobody had accused him of having until he denied, ever having had had them. If that makes any sense to you,

The point is, Donald Trump is hiding something with his medical history. The man has been so secretive about it. That it’s unlikely. Oh, not to mention, you know, we had his first white house, dr. Ronnie Jackson, who came out and said, he’s the healthiest human being I’ve ever seen, even though he’s very clearly like 50 pounds overweight, he’s very obese. He does not exercise. He lives off of McDonald’s and other fast food items. And Hey, if that’s your thing, do your thing, but don’t lie to us about your health and be like knob top-notch no cholesterol, no heart issues, no nothing. Even though he is on heart medication, he’s been lying to us since day one. He had his doctor lied to us. He had that crazy look and doctor during the campaign lie to us. And it’s very likely given the evidence that we are able to see with our own eyes, that he could be lying to us again about the mini strokes.