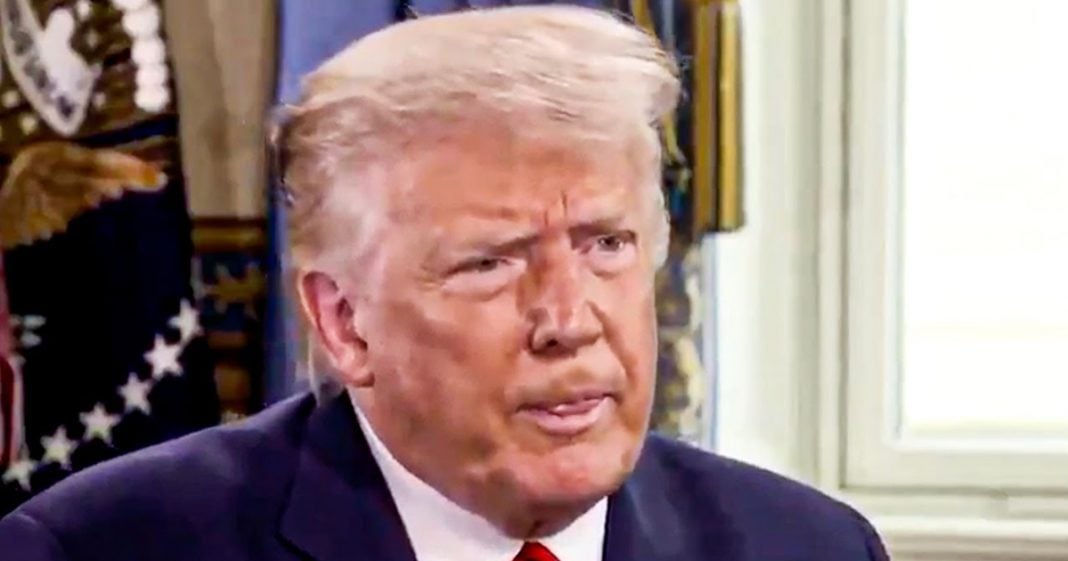 During a recent interview with Fox News host Laura Ingraham, Donald Trump said that there was recently a plane filled with “people in dark uniforms” and these are allegedly the people who are controlling both Joe Biden and the people protesting across the country. This statement alone should be cause to invoke the 25th Amendment because the man is clearly mentally unfit to serve as President. Ring of Fire’s Farron Cousins discusses this.

On Monday, Donald Trump appeared on Fox news where he revealed a bombshell about Joe Biden. I mean, something that could absolutely destroy the Biden campaign. Donald Trump revealed on Laura Ingraham’s Fox news program on Monday evening that there was apparently a airplane, You know what? I’m just going to let the president say it himself. Here it is.

Laura Ingraham:                What does that mean? That sounds like conspiracy theory of dark shadows. What is that?

So a whole plane filled with people in these dark uniforms. Uh, we don’t know what kind of uniforms they were. Maybe it was military uniforms. Maybe it was just a, you know, the standard issue, Antifa uniform, maybe, I guess, if is that a thing? Cause this guy thinks it’s a thing, but don’t worry folks because he can’t tell us any more than the whole thing. Um, I don’t know if anybody’s ever seen the movie airplane, but he’s talking to his girlfriend and he reveals their whole military plan. And then she says, well, when are you coming back? And he goes, I can’t tell you that’s classified, but he’s already given up everything. That’s pretty much exactly what happened with Laura anger. And he’s like, Oh, it was a plane. It was filled with these people in dark uniforms. Uh, you know, they did this, the, the, the, the, Oh, really? Wow. What else? Well, we can’t tell you anything else. You know, it’s classified where there’s an investigation. There’s no evidence it’s by the way that any of this ever happened, um, nobody can find any kind of airport surveillance that shows, you know, large groups of people in dark uniforms, boarding a plane. You know what I mean, airports, pretty heavy security. I don’t know if you’ve noticed that, but, uh, yeah, since since nine 11, we’ve kind of beef things up, that kind of thing. Wouldn’t go unnoticed.

And yet somehow it did, but, but Trump knows about it and felt confident enough to spill the beans there on Fox news with Laura Ingram. Here’s the thing that whole little diatribe that the president went on about this super real thing. And these, I guess, are the people that are either controlling the protests or they’re controlling Joe Biden. I guess that’s, that’s what the investigation is going to flesh out for us a little bit. Um, this little diatribe alone is, is grounds for invoking the 25th amendment on the president of the United States. This isn’t normal. This actually originated as reports have suggested from a viral Facebook meme that was proven to be false. So we have essentially this boomer in the white house that can’t tell the difference between reality and a fricking fake news post on Facebook. He’s your horrible idiotic aunt or uncle that you’ve had to hide from Facebook because they won’t stop posting nonsense.

And yet this guy somehow is president of the United States. The Republicans in DC see nothing wrong with him pushing these ridiculous conspiracy theories that look, I can promise you, there’s not actually an investigation into this. The second anybody went up to somebody in a position to investigate and said, listen, there was an airplane filled with people in dark uniforms, these heading out to, to Kenosha. And that that is going to be a throwing soap at people. And then they’re going to get caught and say, well, no, that’s just soup from a family. They would’ve said, cool, are these, are these people in the uniforms? Are they, are they, are they in the room with us right now? Can you see them? Have you, have you seen the soup? Cause I’m sure by now we’ve all seen the viral clip of Trump, which was actually from a month ago, back in July of him talking about the Antifa soup were more people from out of state would go to where the protests were and they would bury bags of soup.

And then the Antifa would, uh, they’d come and they’d dig up the soup bags. And then they would throw the soup at the cops. Um, Trump says, but then if they were stopped by the cops, they’d be like, no, this is just a bag of soup for my family. But the reason they had to use soup, Trump says this because bricks, bricks are too heavy to throw Donald Trump actually said it is impossible to throw a brick and soup is far more dangerous. Anyway, even though it’s lighter, somehow he’s the man is crazy folks. The man is crazy. And I feel like I get crazier sitting here having to repeat these ridiculous things that he says, this isn’t what somebody with a fully functioning human brain says and does. And I am not trying to be insulting with that. I I’m trying to issue a dire warning to the American public.

We have a president who is very clearly suffering from some kind of mental decline, coupled with a mental illness. And if you don’t believe me fine, but how about we take the advice of medical professionals? Because do you know what they say? The exact same thing I’m saying, which is actually why I’m saying it. I don’t have the expertise to diagnose the man, but the people who do are saying the same thing, dr. Bandy Lee, a Yale forensic psychiatrist. That’s what she has to say about the president. That’s what all of the other contributors to the book, the dangerous case of Donald Trump, that is what they say when he goes out and he gives these interviews like this to Laura Ingram, talking about airplanes, filled with people in dark uniforms. And he’ll, we can’t tell you any more about them, but Oh, they’re the people somehow pulling the strings on Joe Biden. That is the mental illness creeping out.

The man has descended into this paranoid delusion that everyone is out to get him. And to be honest, there’s plenty of people out to get him. That’s, that’s what it is when you’re in politics. The other side is always out to get you, but they’re not loading up airplanes with people to go start protests halfway around the country. That’s not a thing. The only people who are being bused into protests are the right wingers, the Patriot prayer folks, the proud boys, they’re the ones. And there’s actually plenty of statistical data that shows this. They’re the ones crossing state lines to go and fan the flames of these protests. In fact, in Kenosha, uh, of the little under 200 people that have been arrested, um, well over 100 are actually not even from Kenosha, these people coming from out of state. So yeah, there are people traveling the country, Trump, but it’s not Antifa.

And I know Rand, Paul wants to subpoena antiphons flight records and get all of antiphons receipts because as we all know, anti-fossil super real organization with a headquarters and apparently a bookkeeper, you know, they all have to turn in their receipts for reimbursement. These people have gone insane. Collectively the Republican party as a political establishment has lost its damn mind. They, they, they need to be committed. They need to have a team of doctors working around the clock, on them to find out what exactly has happened to them because they have gone from being the party of just bad policy to now being the party that is straight up completely nuts. That is your Republican party of 2020.