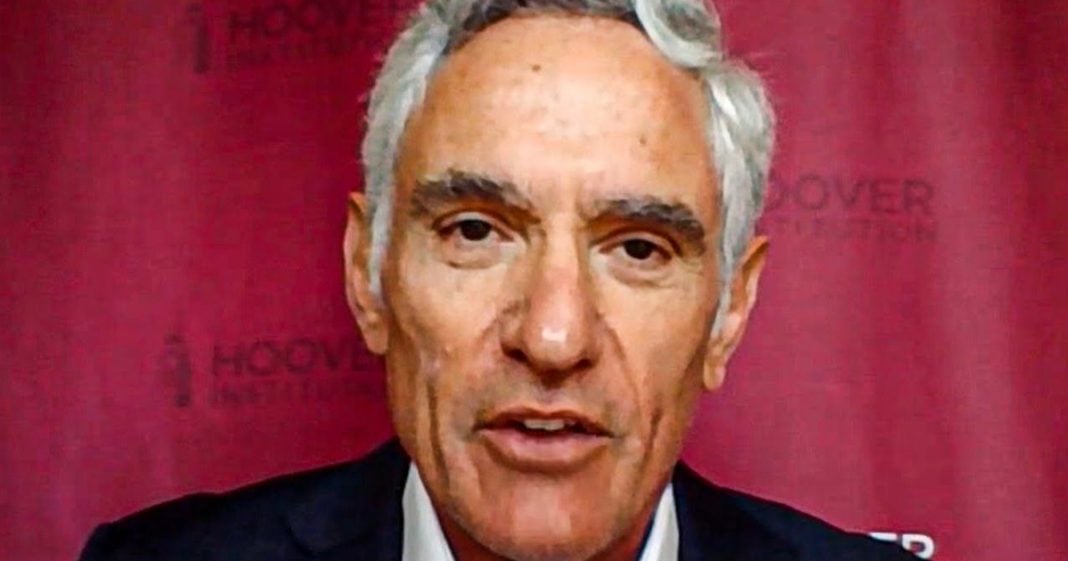 Donald Trump’s latest pandemic advisor, Dr. Scott Atlas, believes that the United States should essentially give up and just try to reach herd immunity as quickly as possible. The only problem is that in order to do that, we would have to have roughly 70% infection rates for this country which would push the death toll well over 2 million people. Dr. Atlas is apparently ok with having that many dead Americans, as Ring of Fire’s Farron Cousins explains.

Earlier in August, Donald Trump appointed a new member to his pandemic response team, a member who has essentially, uh, been described as the anti Fauci. This person is dr. Scott Atlas from Stanford. University’s very conservative Hoover Institute. And, uh, dr. Atlas has a certainly unique view on how we handle the coronavirus outbreak. And according to Fauci, we handle it by not handling it. Uh, Atlas, dr. Atlas says that we should adopt the Swedish model and do what Sweden did with it. And in case you haven’t been following international affairs, Sweden has been regarded as aside from the U S one of the worst possible, uh, responses to the Corona virus. COVID-19 outbreak because Sweden didn’t want to hurt the businesses.

And so they said, well, we’re not going to shut things down. And in spite of the relatively small comparatively population of Sweden to some of the other European countries, their death toll was absolutely astronomical dwarfing countries that had, uh, several times higher populations that didn’t see the level of death that Sweden saw, because Sweden again said, well, we got to protect the economy. We got to protect businesses. You can’t stay home, go get out there in the world and do stuff. And then everybody died. And that’s what dr. Atlas wants to do here in the United States, because he says by doing that, we are going to get herd immunity even faster.

Here’s what, here’s what that means, by the way, if you’re not familiar with herd immunity, we heard it in the early days of this, you know, once we reach herd immunity, everything’s going to be okay, blah, blah, blah. In order to reach herd immunity, medical experts are pretty much in agreement that we need to hit roughly 70% saturation rate for the virus. Meaning damn near 70% of people in this country would have to have had it. And if we hit 70% of people having had it, that means that the death toll at a bare minimum here in the United States would be 2.2 million people. And that is what dr. Atlas, the man who is now in Donald Trump’s a year instead of dr. Anthony Fauci, that’s what dr. Atlas wants us to do. And that’s what dr. Atlas is okay with because dr. Atlas being a conservative and being a good little shill for the Republican party, believes that we should always no matter what put the interest of big business over the health, safety, and welfare of the American public, that is what the Republican party is all about.

That is what the Republican party has been all about. At least for the last many decades. That is who they are. It doesn’t matter if 2.2 million Americans drop dead. If it means we get to reopen some businesses and I’m sorry, but those aren’t numbers that I’m willing to play with. I’m not willing to gamble that me or my family or my friends and loved ones, uh, that they could be part of that 2.2 million. Are you willing to gamble that with your life or with your family, your friends, you think you might not be one of those 2.2 million people doesn’t matter what you think doesn’t matter what I think doesn’t matter if we’re willing to make that gamble or not, because the person now advising Donald Trump on how to handle the pandemic. He is more than happy gambling, and he doesn’t care if you’re in the 2.2 million dead or not.