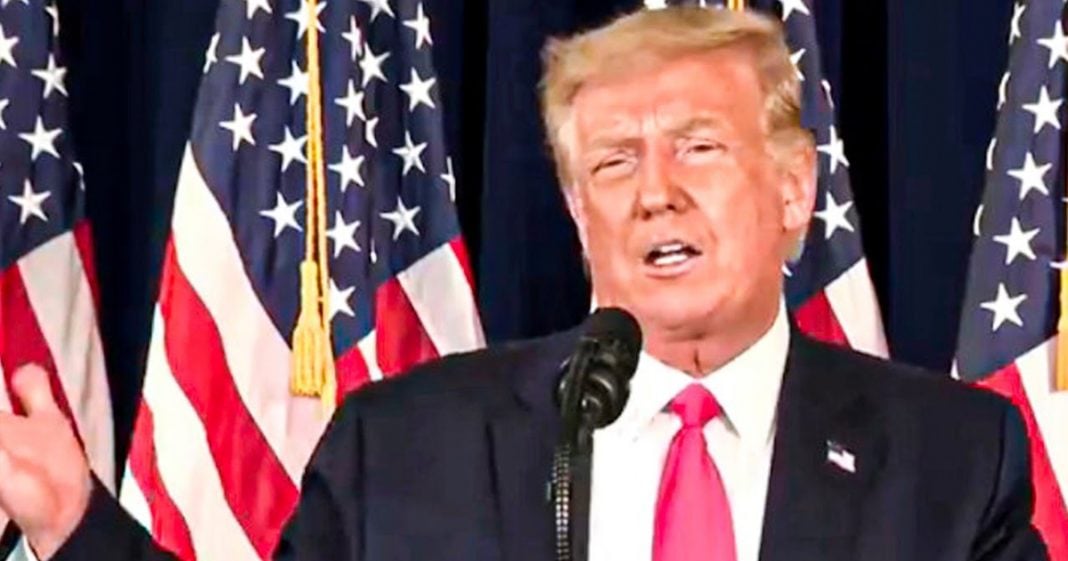 Donald Trump’s Director of National Intelligence, John Ratcliffe, is cutting off Congress from in-person election security briefings and instead will be submitting written briefings to both the House and the Senate. This will prevent members from asking any questions related to election security, which means vital information can and will be omitted with Congress having no recourse to get that info. Ring of Fire’s Farron Cousins explains what’s happening.

Late last week, uh, John Ratcliffe, the director of national intelligence informed both the house and the Senate that they were no longer going to be getting in person briefings about election security, no more in person briefings, which means the amount of information that both the house and the Senate are going to have about how secure our elections are, is going to be severely limited because during the in person briefings, they’re allowed to ask questions. They’re allowed to dig a little deeper, allowed to, you know, get more information by cutting those off. If you have a question you’re going to have to submit it, and you better hope that John Ratcliffe has enough time to go through and answer your question and submit you in writing an answer, the odds of that happening, obviously astronomically tiny, which is exactly why they’ve decided to cut off the election security briefings.

They’ll still be getting them in writing, uh, according to the, uh, director of national intelligence, his office, which is not in person, which again, they’re going to leave information out. And the big question I guess, would be, is why in God’s name? Would you cut off these briefings about election security when the election is now right around the corner? Doesn’t that seem like the kind of time where people should know more about what’s happening, right? This thing that’s like right here. Now we should know if it’s safe or not. You know what? It’s like two years away, you could probably submit them in writing and get it, you know, be okay with that. But as it gets closer, you kind of need to talk to us in person. Here’s the thing we know now, right now we haven’t yet [inaudible] that tells us that you have countries like Russia, China, Iran, all trying to interfere in the United States, election damn near all of this influence comes in the form of bots online.

So yeah, that’s piddly stuff and that’s really technically not election inner, uh, election security. I should say it’s interference. It’s one of those questionable, like pass interference calls that you’d see in the NFL. We were like, I don’t really see that as interference, but you know, the referee called it, whatever. Uh, what is actually important though, is the fact that people here in the us can interfere in the election because our systems are not secure. You know, there’s very little evidence to suggest that outside countries actively tried to hack into and gain access to voting systems here in the United States, there is some evidence to suggest that that may have happened in the small scale. And perhaps that is what they’re planning this year. We don’t know because we don’t get those briefings. And now Congress didn’t either. But what is important is that we know 11 year old kids with good computer are able to hack into our systems because they’re that vulnerable.

You don’t have to be some kind of super master computer scientist. That’s been doing this for 30 years to get into the system. You could be a kid that just does this as a hobby and boom you’re in you’re changing votes. You’re kicking people off the voting rolls. You’re influencing the election from right down the street of a polling place, not from, you know, miles and miles and miles, thousands of miles away in Russia. I know that may come as a shock to hear, but for the love of God, people, it doesn’t have to be Russia. It can literally be your neighbor, be the person down the street. It could be their kid in middle school, but we’re not even taking that threat seriously. And the Trump administration. Sure. Isn’t because as we’ve seen over the years, really, anytime there’s kind of election shenanigans, anytime there’s votes switching, anytime there’s people kicked off the voting rolls, anytime there is foreign interference that is verifiable. It always seems to benefit the Republicans. And that’s why the Republicans are always the one unwilling to do something about it.