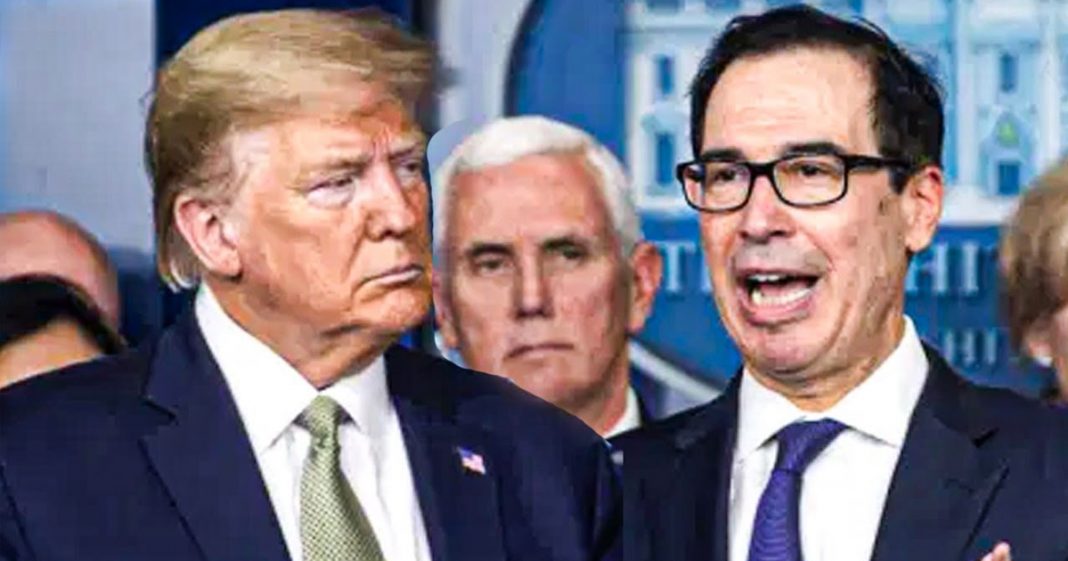 According to a new report by The New York Times, Steve Mnuchin’s own family, including his father, are utterly “appalled” by his politics and by his devotion to Donald Trump. It is nice that the family understands how toxic Trump and his policies are, but the real question is why did it take the family this long to grow disgusted by Steve? He was nearly locked away for criminal activity in California – they weren’t appalled by that? Ring of Fire’s Farron Cousins discusses this.

According to a fantastic new report in the New York times, Steve Mnuchin family is absolutely appalled. And that is actually the word. One of them used. They were appalled with Steve Mnuchin over his devotion to Donald Trump and his willingness to go along with the horrendous policies coming out of this administration. And by the way, the person in Steve Mnuchin’s family, who said he’s appalled by minutia in his actions, uh, that happens to be his father. Uh, when speaking to the New York times, this is what Steve Mnuchin’s dad had to say. He said, uh, uh, his politics upon me to really appall me, but he’s my son. Mmm. Earlier, when they had spoken to my nutrients father, uh, they tried multiple times and he didn’t realize he was actually talking to them at the time. Uh, they tried previously and, uh, he wouldn’t really comment on it, but he almost, as they said, broke into tears about it.

Cause he’s that heartbroken about what his son has become. Meanwhile, Steve Mnuchin’s is a mother. Adriana is constantly having to remind people and going out of her way to remind people that she’s not his biological mother. She’s actually just as stepmother. She married his father and became his stepmother when Steve was a toddler. But in spite of the fact of being in his life for decades, since he, you know, before he could even remember, she must be able to know, Hey, I didn’t come from me. Then name my kid. I just married into this craziness. Uh, and then of course you had, uh, Zan Mnuchin Rosen who, uh, we’re good on Facebook. And this post has been deleted. My uncle has been complicit in and in some cases directly culpable for many years of the marginalization, persecution and stereotyping of black people in the United States, his actions cannot and will never be defensible.

So heck yeah, you know, I have to applaud the Mnuchin and family tree, everybody, but Steve, basically for waking up and seeing how horrible this is, I also have to criticize the entire Mnuchin family tree over the fact that you’re only now speaking out about this horrible, horrible branch of your tree. I mean, did you really think that Steve only became horrible when he joined Donald Trump’s administration? Were you not paying attention to California for the years was a 2009 to 2015, six years when he was running the one West bank, when he engaged in all sorts of different forms of mortgage fraud, wind, then California, AIG Kamala Harris had over 1000 different pieces of evidence, one West bank, but decided nicely enough to not prosecute him. Like over 1000 instances, they found of them breaking the law and they just said, nah, we’re not going to do it.

He gives us a lot of money like that. Didn’t cause you to speak out. Like you didn’t feel like telling the New York ties that you were appalled by that you didn’t feel like writing on Facebook, that his actions were not defensible. I mean, come on folks, Steve Mnuchin did not become horrible just because he embraced Trump ism. Steve Mnuchin embraced Trumpism because he’s horrible. Y’all got to get this cause and effect thing down, right? Because Trump is not the cause. Trump is the effect. Steve Mnuchin was a horrible rotten deceitful human being long before he joined forces with Donald Trump. And he will be long after Trump is out of the picture too. That’s just his history. It’s documented. There were investigations into it before Trump was there. Steve Mnuchin was still appalling.