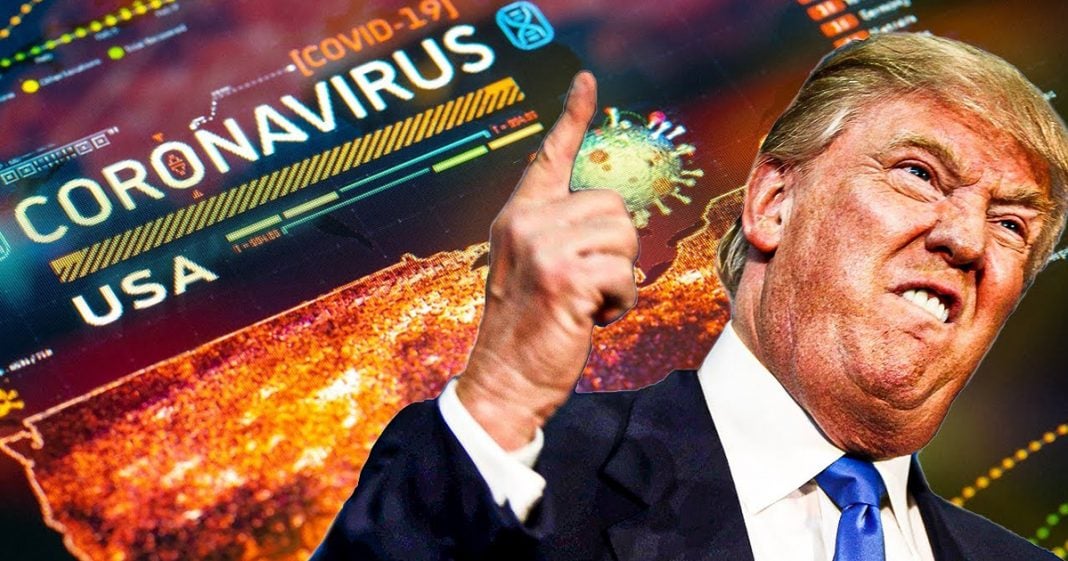 Donald Trump’s overtly politicized Justice Department announced last week that they were considering launching massive investigations into blue states to find out why the death toll from COVID 19 infections climbed so high. While there are serious questions in blue states that need to be answered, there are plenty more from Red States that also need to be investigated. This is a purely partisan attempt to sway the 2020 election by Trump’s DOJ, as Ring of Fire’s Farron Cousins explains.

Donald Trump’s overly politicize us department of justice announced last Wednesday, that they were considering launching investigations into blue States to find out why democratic governors allowed so many people to die from the COVID-19 pandemic. Now specifically, they say they want to look at some of the decisions of these blue state governors in New York, New Jersey, Pennsylvania, and Michigan, as to why they violated the civil rights of people in nursing homes, by allowing COVID patients to be housed in these nursing homes. Mmm.

Okay. That warrants an investigation. I’ll be honest with you. It really does. But here’s the thing though. Uh, see this didn’t, this didn’t just happen in blue States. It’s actually happened in a lot of States, any state where you saw a hotbed of infections and you saw a lack of availability of hospital beds, they did what they could to house these people who needed to be under constant supervision, who needed to be on ventilators. Nursing homes are areas that are equipped, you know, not for medical procedures per se, but they do have some medical equipment on hand. They have beds, they have train staffs. These were logical places to put these people when you ran out of hospital beds. Now, the problem is what happened after that? You know, why did you allow the healthy elderly folks to stay in there and possibly become infected?

Now that’s something that needs to happen, but it also needs to be investigated in red States as well, because this was not limited to blue States, but the reason they’re focusing on the blue States is because they want to announce an investigation. They want to do something that’s going to make Democrats look bad, going to make Democrats look somehow responsible for the pandemic prior to the 2020 election. That is what this is all about. The DOJ is in Donald Trump’s pocket. They have done whatever they can do for the last couple of years to protect this man. And that is what this is. That is why they announced it. First that we’re considering doing this. When does the DOJ come out and make an announcement saying, you know, we’re thinking about everything in my luck, launching an investigation into this. We may, we may not.

We don’t know. We don’t know what’s going to happen. Maybe we do. Maybe we don’t, they, they don’t do that. But this one does because it’s not about justice. It’s about politics. There are plenty of investigations that are absolutely warranted. And I got to tell you that most of them aren’t related to blue States. I’m down here in Florida. I would love to see investigations as to why our governor, Ron DeSantis refuse to issue any kind of mandatory stay at home order until the white house told him it was okay to do it. I would love to know why he decided to reopen the state backup. Even though we didn’t see a flattening of the curve. And in fact, he opened it, things shot way back up, and then he didn’t close it down again. I would like to see an explanation for that. Maybe we should investigate that.

Cause other red States where they did begin to see a surge, they went back on lockdown. But Florida, when we saw the surge and it lasted for well over a month, do you know what we’ve done? Instead, we’ve stopped testing. We’ve cut down the number of testing centers. So that’s why our numbers are going down right now. Not because we’ve got it under control, but because they’re not letting people get tested anymore. So therefore you don’t test. You’re not a positive case. You don’t get counted until you fucking die. And that’s why their deaths are going up here in Florida. So, you know, potato Patato right? That I think warrants in investigation, Texas, their death toll is actually just about 120 people away from surpassing in California, making Texas the deadliest state of the pandemic. How about we investigate the Republican governor of Texas, uh, after all the Lieutenant governor is the one who, uh, Dan Patrick, who went out there and said, maybe we have to sacrifice the elderly in order to appease the economic gods.

I think that is something maybe, maybe should be investigated. As I said, there’s a lot of investigations that need to happen, but most of them are not in the blue States. There’s some in blue state shirt like this nursing home thing. There, there are answers that need to be made. A quote will open New York, absolutely made some deadly decisions regarding the nursing homes that got people needlessly killed that should be investigated. But the DOJ is not interested in coming up with answers. The DOJ is not interested in solutions or preventing things like this from happening in the future. The DOJ is doing this because they want to hurt Democrats because that’s the only way they can help Donald Trump.