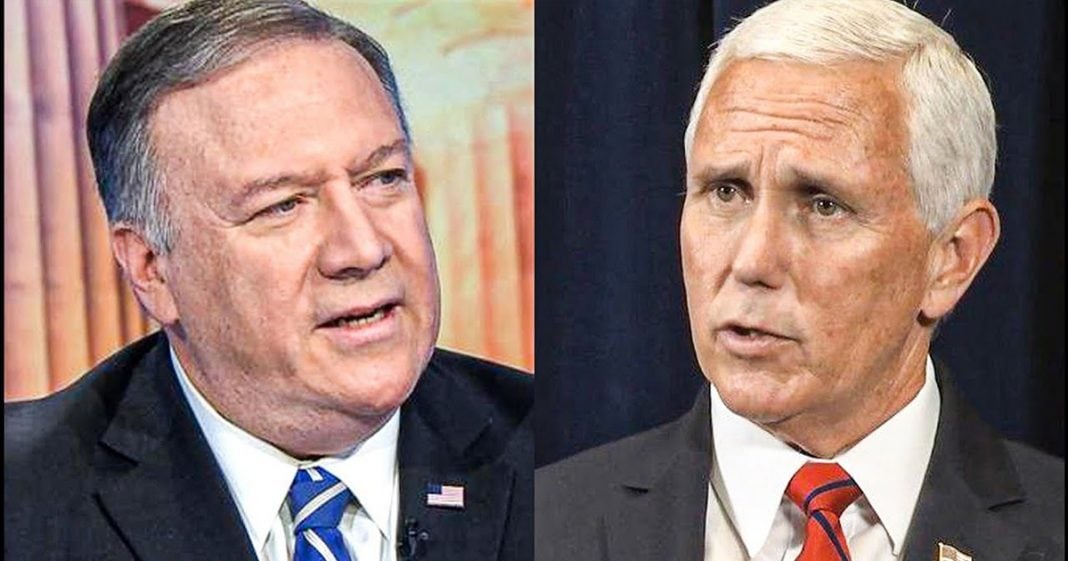 According to new reports, members of the Trump administration have admitted that part of the reason they love violating the Hatch Act so much is because it drives the media crazy. The Hatch Act is a federal law, and whether the administration likes it or not, their repeated violations are not seen as something that is “owning the libs”; It is something that further proves this is a criminal syndicate instead of a legitimate administration. Ring of Fire’s Farron Cousins discusses this.

You know, yesterday when I talked about the fact that, uh, you had secretary of state Mike Pompeo doing his RNC convention speech from a, uh, uh, Jerusalem trip that was funded by taxpayers. Uh, I talked about the fact that it almost seems like these people do it intentionally. And according to a report from the daily beast that actually came out later in the day, turns out I might actually be right about that because this report that spoke to some Trump AIDS and insiders said that members of the administration do Tend to violate the hatch act

Because they know it’s going to drive the media crazy, uh, to put it another way. They’re breaking a law, a federal law to own the libs, to own the media. I don’t know what it is, but they’re actually breaking a federal law because they think it’s fun to watch the media freak out about it. And then of course you had Donald Trump’s chief of staff come out yesterday, Mark Meadows and say that, Oh, you know what, nobody outside the DC beltway cares about these little legal violations. That’s what he said. He said, nobody outside the beltway cares about it. And he may be right, but that’s neither here nor there your doing something illegal. You’re violating a federal law that has been in place since 1913, nine. It’s not like it just popped up yesterday and you didn’t know about it. Okay. We’re talking about a law.

It’s almost 80 years old. Actually it is 81 years old. You, you, you, you know, it’s, it’s been there, you know about it. In fact, you know about it enough because the office of government ethics actually said, you need to fire Kellyanne Conway because she keeps breaking the law so much. And the thing with Pompeo speech speeches, I already mentioned, he didn’t even have to do it from Jerusalem. It’s a prerecorded thing. He could’ve done it a week ago. He could have done it a month ago. If he wanted to, that wouldn’t have mattered. He intentionally did it as these aides point out. He intentionally did it while on a taxpayer funded trip because they think it’s fun to break the law and watch the media freak out about it. That’s the level of just absolute disdain for the American public that this administration has.

That is what we are dealing with leading this country today. These are not grown ups. These are not adults. These are not mature human beings. These are adolescents. These are people who never grew out of that. You know, a junior high mentality of, Oh, they pissed me off. So I’m going to do something to piss them off. I’m going to get them good. Oh, watch this. But these are men and women in their fifties and sixties and seventies. This stage of their life should have ended roughly 40 to 50 years ago, but they’re still living. And that arrested mental development, Tulsa state that they are currently in. And this is what we get and administration that blatantly violates federal law on the regular because they think it’s fun to piss off the media. And of course the other big part of it, they also know they’re never going to actually get in trouble for it.