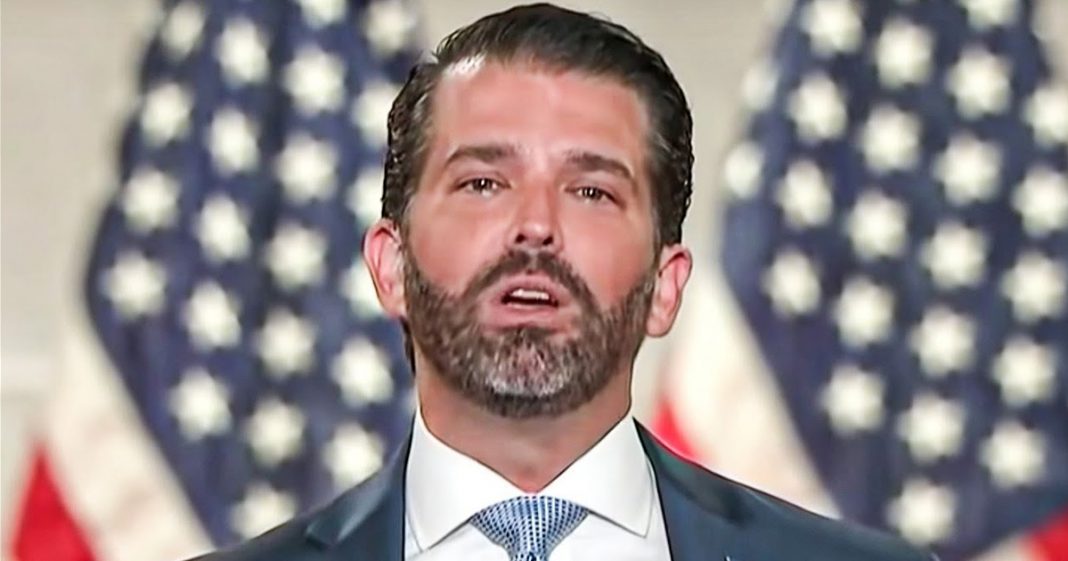 Donald Trump, Jr. has been ridiculed relentlessly, but deservedly, for his mannerisms and bloodshot eyes during his Monday night speech at the Republican National Convention. But he swears that it wasn’t because he was on drugs – it was the lighting! During an appearance on Fox News, Junior actually blamed the bizarre speech on lighting, then deflected by attacking Hunter Biden. Ring of Fire’s Farron Cousins discusses this.

After Donald Trump jr. Is a let’s call it a bizarre speech on Monday evening at the first night of the Republican convention, a lot of people on social media and even in the traditional media speculated that maybe Donald Trump was on something. And the, uh, drug of choice that people on social media say it was, uh, was cocaine because, because of the way he spoke cause of the kind of deer in headlights look he had. And of course the ridiculously bloodshot eyes in case you missed it, by the way, uh, here is a sample of Donald Trump jr. Speech Monday night, take a look.

America is the greatest country on earth, but my father’s entire worldview revolves around the idea that we can always do even better. Imagine the life you want to have one with a great job, a beautiful home, a perfect family. You can have it. Imagine the country you want to live in one with true equal opportunity where hard work pays off and justice is served with compassion. And without partiality, you can have it. Imagine a world where there are evils of communism and radical Islamic terrorism are not given a chance to spread where heroes are celebrated and the good guys win. You can have it. That is the life. That is the country. That is the world that Donald Trump and the Republican party are after. And yes, you can have it because unlike Joe Biden and the radical left Democrats, our party is open to everyone.

Uh, he certainly seems not normal there. If you’ve seen, you know, speeches from Donnie, jr. If you have seen interviews that he has given, that’s not what he looks like. That’s not what he sounds like. That’s not how he acts. So either he was terrified, uh, which may account for like the stiffened appearance of like a God. And he’s clearly reading off the teleprompter, but he’s got his head kind of tilted back a little bit as if he’s trying to not let stuff, you know, drip out of his nose, which is a common thing that happens for people who do certain drugs that are taken nasally. I am not look, Hey, whatever, to each their own. I’m not here to judge and I’m not here to make accusations, but I am here to say that, gosh, darn it. That looked like somebody who was on some, those bloodshot eyes are kind of the dead giveaway.

Either. You were sitting, backstages rubbing your eyes real hard and then looking at a light. So you got the little thing that we used to as kids, whatever, uh, or you’ve been taking something just own it, man. Uh, but Fox news of course, likes to run interference for the Trump gang. And so they brought Donnie jr. On, uh, yesterday on Wednesday after, you know, a day had passed to, to call out the media and all the mean old folks saying that Don jr was on cocaine. And this is what happened during the Fox news interview. Take a look.

You were one of the keynote speakers on the first night, Monday night. And speaking of the media, I afterwards I saw that the main concern was why were his eyes? So glassy? Well, I guess there must’ve been something with the lighting, but they started doing this trending thing. Donald Trump, junior zone cocaine and all that I said, no, no, no. You have me confused with Hunter Biden. Oh, it was, it was pretty ridiculous. You know? So when they can attack the delivery, when they can attack the substance, they gotta attack something. Just like, So it wasn’t, it wasn’t cocaine. It wasn’t a drug. It was the lights, the lights to death. The lights made him look all sweaty and glassy eyed and red eyed. And uh, look, I’ve been working in TV studios for over 10 years, like on a daily basis. Some of the brightest lights,

You know, uh, the, the studio back at the office has like 15 lights up. They’re all super bright. That’ll hurt you. If you look directly at him, never once have any of those lights made my eyes glassy and red. Never, never. I’ve been sweaty plenty of times. Yeah, sure. You watch videos long enough. You’ve seen that. I I’m willing to bet. Never had to make it look like I did cocaine now. Not once. Uh, there’s never been any time when I’ve done videos in this situation like that, which is similar to what Don jr. Was under where anybody ever thought, huh? I think Ferran might be on drugs. That simply doesn’t happen. And of course, what the funniest thing too is, he’s like, Oh yeah, you know what? They can attack the message. They got to attack the person that comes like a few seconds after he was like, I didn’t do cocaine. You must have me mistaken for a hundred Biden. Stop attacking me. The people were like, no, you crazy person. The reason we’re not bothering to attack your message is because you didn’t have a message. I mean, I just played a, what was probably like 20% of your speech.

There’s no message. You’re a used car salesman. You’re a late night infomercial, Europe. You too can have this. All you have to do is vote for my father. If you call now, I’ll throw in Mike Pence for fruit and no, like that’s, that’s not a plan. Those are policies. That’s just a ridiculous guy who looks like he’s standing for the first time ever head tilted back. So nothing falls out of his nose. Glassy-eyed given a speech that he is very obviously reading off a teleprompter, uh, by the way, worse than Obama ever read off a cause you’ve loved to make fun of him for reading off teleprompters. You barely pulled it off. Donnie jr. This was embarrassing, but it’s pretty much what we’ve come to expect from all members of the Trump family, both senior and junior, but also got to give a hand to Fox news, right?

They saw they had a problem with their little golden boy, Donny jr. They saw everybody was making fun of him. So they brought out Steve Doocy Fox and friends and said, get him on and let him clear the air. Unfortunately, I don’t think they expected for him to come on the program and look like he still hadn’t come down off whatever bender he was on Monday night. Again, go back and look at other interviews that Don jr has done and compare it to the clip you just saw. It’s not the same. Something’s different. Maybe it’s nerves, maybe it’s anxiety. I mean, look, we had the reports come out earlier this week that Don jr says, he’s worried that if his dad loses election, he and his family might be going to jail. So maybe that’s what it is. Or maybe, you know, Kimberly Guilfoyle he’s only been with her.

What maybe a year or so? A little longer. Maybe she got him into bad habits. Maybe he got her into bad habits, maybe living the life of leaving his wife who knows. And you know what, maybe it was the lights. Maybe some drugs fell off the lights and fell into his eyes. Maybe he was crying backstage. Maybe he has pink eye in both eyes. We can’t say for certain we’ll never know for certain. But one thing is for certain Donald Trump jr. Looked like a deer in headlights on Monday night, did not know what he was talking about. And then Fox news turned around and gave him the platform to not only try to clear the air about what happened to him, but also get in some cheap shots about his opponents kids. Now that’s a low, Even for Fox news.