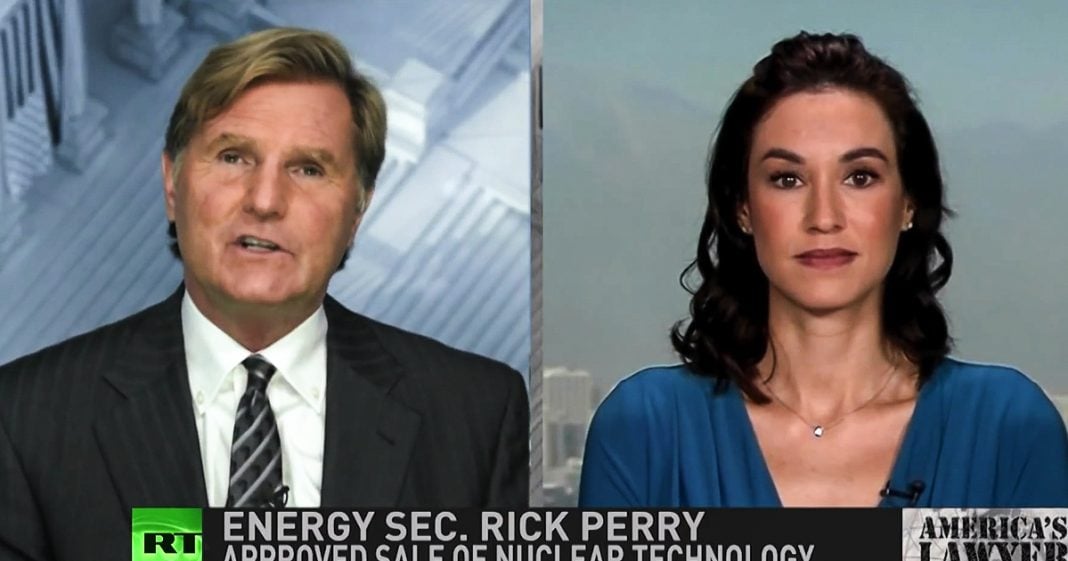 Via America’s Lawyer: RT Correspondent Brigida Santos joins Mike Papantonio to discuss the Trump administration’s deal to share nuclear technology with Saudi Arabia which raises concerns in Congress. Then, Mike Papantonio is joined by investigate journalist, Mollye Barrows, to talk about how a City School District bus driver admitted to raping a 14-year-old girl, only to get a plea deal with no jail time.

Mike Papantonio:             US Energy Secretary Rick Perry has approved six secret authorizations by companies to sell nuclear power technology assistance to Saudi Arabia. RT correspondent Brigida Santos joins me now with the story. Brigida, before we go into too much detail, give me an idea of what the story’s about.

Brigida Santos:                   Perry has approved at least six Part 810 authorizations, which allow American companies to start working on nuclear power technology that can be transferred to a foreign government. Now in this case, it would be transferred in, hopefully in their case, to Saudi Arabia. And that’s because the kingdom is currently reviewing competing bids from companies in the United States, in Russia and South Korea as Saudi Arabia gears up to build two nuclear power plants.

Now, Saudi Arabia says that it’s not going to announce the winner of these contracts until later this year. So until then, these authorized US companies are going to be working merely to convince the Saudis to choose American products like nuclear reactors and other services over those of their competitors.

However, the authorizations have come under scrutiny because they were carried out in secret. Now, Perry claims secrecy is necessary to protect the company’s proprietary information, but normally nuclear authorizations are disclosed to the public at the time of taping that has yet to happen.

He thought the voting age in the United States was 21. He called social security a ponzi scheme. So I guess what I’m getting at here Brigida this is the guy who wants to sell nuclear technology to the Saudi Arabia, to Saudi Arabia. Technology that has never been disclosed to them. They don’t need it for power. They’ve got all the power they need. They’ve got oil, they’ve got deserts for wind power. They’ve got solar power.

It’s not about power. They want to build arms, they want to build weapons. And so this genius says, yeah, this is a guy we’re allowing to make a decision like this. What’s the reaction to buy US lawmakers about this character making decisions like this? What’s their reaction?

Brigida Santos:                   Lawmakers on both side of the isle are worried that if the US wins this bid, Saudi Arabia will develop nuclear weapons and spawn a nuclear arms race in the Middle East unless proper safeguards are implemented. And that’s because Saudi Arabia’s Crown Prince Mohammed bin Salman has previously said that his country will develop nuclear weapons if its rival Iran does. And now that the Trump administration has pulled out of the Iran nuclear deal, MBS’ stated plan is not completely out of the realm of possibility.

Now, of course, the Iranians have not, according to reports, violated terms of the agreement, even though it’s been tossed out. So it’s also unclear whether the kingdom is even going to agree to American anti proliferation standards or whether the US is even going to impose them this time around. Now in the past, negotiations broke down because Saudi Arabia would not commit to rules that would ban uranium enrichment and other pathways to making fissile material for nuclear weapons.

So if the US does not impose safeguards on Saudi Arabia, it could result in all out proliferation across the entire Middle East because no other country would be incentivized to follow those rules if Saudi Arabia isn’t.

He’s been a goof since he, since he was knocked out of the primaries and we’re making, we’re allowing him to make decisions without stepping in and say, no, we’re not going to sell the Saudis this technology. The other part of it, it was what you raised. When have we ever been able to really influence what the Saudis want to do? It’s the, it’s the worst dictatorship on the planet almost. And so this dictatorship when we’ve said, hey, can you work with us on oil prices?

No, we can’t. Can you work with us as far as getting along with this country or that country? No, we can’t. So all of a sudden they now have nuclear weapons and we’re supposed to say we’re going to be able to negotiate with them? Here’s, look, let me ask you this. Representative Brad Sherman, a Democrat is asking secretary of State Mark, Mike Pompeo to release the names of the companies that got the approvals by the middle of April. He is very good question. Very important information we should have. We need to know who’s tied up to who, who’s making money on this deal. How likely is it that we’re going to get that information Brigida?

Brigida Santos:                   It’s extremely unlikely, especially since the companies are still in competition against those firms in Russia, China and South Korea. But it’s not just Democrats, I want to mention that are concerned, as I said, Republican senators that are also worried about US Saudi negotiations. And in fact, Senators Marco Rubio and Bob Menendez have called on the Government Accountability Office to review the Trump administration’s nuclear power negotiations with the kingdom over reports alleging that some are conducted without federal oversight that’s required by the Atomic Energy Act.

The House Oversight Committee has now opened a formal investigation into the plan, which involves a group known as IP3. The congressmen also noted that the Department of Energy is leading these so-called 123 nuclear negotiate cooperation agreements rather than State Department, which is very unusual and inconsistent with previous nuclear agreement negotiations. And that’s where Perry comes in because he, you know, he’s always been a big energy guy, oil in Texas. So it’s all very questionable.

Mike Papantonio:             Brigida, the very idea of Rick Perry having anything to do with nuclear energy, on its face is terrifying. Thank you for joining me. Okay.

Mike Papantonio:             In Watertown, New York, people are outraged that a man who pleaded guilty to raping a 14 year old girl won’t be serving any jail time. Legal journalist Mollye Barrows with the Trial Lawyer Magazine joins me to talk about this. I don’t know. This is the most vulgar story. It’s vulgar on so many levels.

Mike Papantonio:             But to me, here we have a 14 year old girl, and the judge says, ah, well we’re just going to give this guy probation. What, what was the rationale that you saw here? I, I looked for it and I couldn’t find the rationale.

Mollye Barrows:                Yeah, I know. Well I’ll, I’ll outline the details of the case for you and then we’ll get into a little bit about, so that helps explain what their rationale was. But essentially this guy, Shane Piche, was sentenced to 10 years probation and he pled guilty to a third degree rape charge. His initial charges had been raping this 14 year old girl he had met when he was a bus driver for the Watertown city school district and she was a student on the bus.

Now the alleged incident or it’s not alleged, he confessed to it, happened at his home. He was also charged originally with I think providing alcohol, contributing to the delinquency of a minor basically by providing her alcohol. And apparently there had also been two other girls there as well. And he had initially been charged with providing them alcohol too, but that charge didn’t show up. I don’t know if it was dropped or what the situation.

Mollye Barrows:                He was 26 at the time that this happened. So yeah. So essentially he ended up pleading guilty to this and as they’re going through the process, they had charged him as a sex offender, but only a level, they wanted, the prosecution wanted a level two and the judge said, no, it only needs to be a level one because they ended up knocking the charges down to where it was just her. She was the only victim. These other two girls that he allegedly gave alcohol to, those charges weren’t brought before court.

Mollye Barrows:                And what I read between the lines as and in various other reports was that they’re essentially in a way, yes, because she wasn’t disagree, she, she, just because she was not of the age to consent didn’t mean that she did not consent.

Mike Papantonio:             It doesn’t happen like that. So this judge, I can’t imagine that he’s not under pretty serious scrutiny. What’s the outcry on this?

Mollye Barrows:                Yes. So, James P. McClusky is the judge. He’s the one that decided that the level of sex offender should drop from a two to a one. He, you know, made a number of comments that basically would imply that he felt like that there was, because the guy had no priors, that he felt like that that level needed to be dropped as well. There’s 50,000 signatures now wanting this guy taken off the bench because of this. People are outraged.

The victim’s mother is outrage. She said, you know, he took something from my daughter she’ll never have back again. Now she’s dealing with depression and anxiety. And the impression that you get from the DA’s office as they defend this judge’s sentence was that hey, we actually did her a favor. If we had initially charged him under the higher level rape charge that we were looking at, which did have similar sentencing guidelines to the one that he ended up pleading to, if we had charged him under that she might’ve had to have testified, she would’ve had to have testified before a grand jury as well as at trial.

So going back to your point, it’s almost like you’re, hey, we know that you were raped, we know that you might’ve consented but you’re not at the age to consent, so we’re just going to save you the trouble of testifying.

Mike Papantonio:             Yeah, and see those are the operative words. Age of consent. Again, this isn’t something that somebody just arbitrarily picked out a number and said, it’s this number and here, everything below is below the age of consent. They’ve studied it and they’ve figured out what is the impact girl, to a young lady in, in later years. When can she really consent? Obviously 13 and 14 is not an age of consent. And so I think that, I think they really need to treat this, this judge very poorly in this, and I hope they do.

Mollye Barrows:                I hope they do as well, Pap. We’re going to continue to follow it and see what becomes of this petition and the public outcry in this case.

Mollye Barrows:                Absolutely, and we certainly know the patterns with people like this, often cases.