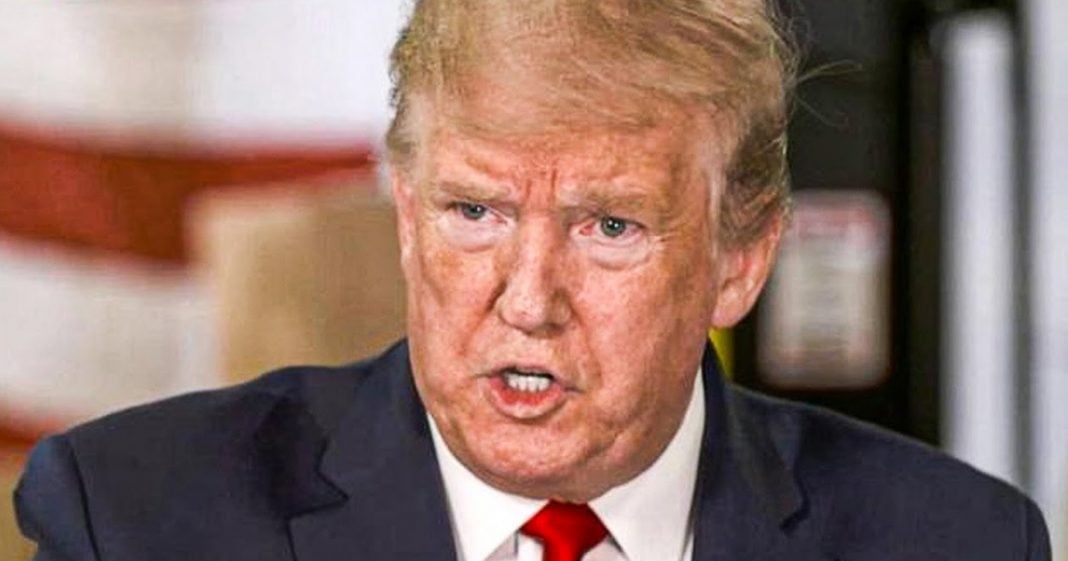 New York Attorney General Letitia James filed a lawsuit this week against Donald Trump, Louis Dejoy, and the U.S. Postal Service in an attempt to stop the damage that they are causing the postal service. New York is joined by numerous other states, including vital swing states, and they are all challenging the administration on the grounds that this will have a major negative impact on the election.  This may be the last hope to save the post office, as Ring of Fire’s Farron Cousins explains.

New York attorney general, Letitia James filed a lawsuit against Donald Trump, postmaster general Louis DeJoy and the United States postal service itself on Tuesday alleging that the, uh, three groups, two individuals, one group really, uh, alleging that they are doing everything they can to tamper with the 2020 presidential election, uh, through DeJoy’s attacks on the post office that the post office has also followed through with that’s why they have to be named in the lawsuit as well. And of course, all of this is coming from Donald Trump, and that is why he is also named in the lawsuit. Um, this lawsuit filed by the state of New York has been joined already, uh, by Hawaii, New Jersey, uh, and the city and County of San Francisco. Uh, so still relatively small. However, there are other States that have also filed lawsuits, uh, to stop the destruction of the post office, Pennsylvania, uh, Washington, Pennsylvania, of course, being a very important swing state.

Uh, the Trump administration so far losing court battles in the state of Pennsylvania over there, a challenge to Pennsylvania’s vote by mail. So a lot of different lawsuits happening right now, but all of them geared towards protecting our election in November. And this lawsuit being brought by Latisha, James that, uh, New Jersey Hawaii and San Francisco have joined into this is a big one. This is very important. Latisha James, obviously a hugely successful so far, um, as an attorney general for the state of New York, very busy, also, uh, super admirable, what she is doing and how effective she is. Uh, I, I think we can expect great things from her as her career continues. Uh, but that’s a discussion for another day. What’s important right now is protecting the 2020 elections. And that is exactly what these lawsuits are trying to do. Okay. We know we have Congress out there.

They have pulled the joy in. They have made him look like an idiot. He doesn’t even know how much a stamp costs costs. That’s it so well and good. We, we knew the guy was incompetent. Okay. The there’s, there’s no hiding the fact that he he’s got 75 million, I think, uh, invested in competitors of the post office. So he stands to gain financially by destroying the post office, you know, helping Trump has just kind of the side effect for the joy. It’s the main point for Trump self? Shall we know all this? The question is what is the house of representatives doing to put things back? We know they’ve passed legislation. Fantastic. Um, mostly symbolic cause obviously not going to pass the Senate and sure as hell isn’t going to be signed by the president, but what’s happening with these lawsuits. This is real. These are things that could have an immediate effect. Unfortunately, I don’t think there’s enough time at this point as disappointing and depressing as it is to say this, we may be looking at one of those instances, uh, where Trump may have won the battle. Cool.

They did this so late in the game and it was so immediate. The things that they’ve done and to joy was able to convince the public enough a week or two ago saying I’m not going to mess with it anymore. And yet reports are still coming out today that they’re still messing with it. They’re still removing mail sorting equipment, and they’re not even letting any of the equipment that was removed. Be re-installed the damage may be done. And these lawsuits may not be able to work through the court system. Uh, fast enough, even with, you know, emergency filings, it may not be fast enough to actually get the post office functioning again in order to have a reliable vote by mail, uh, service. Here’s what people need to do. If you can vote early by mail vote early by mail. If you have not already requested a ballot by mail, do so immediately in accordance with your state’s guidelines, uh, you can typically find those on your, uh, state government website.

Uh, there should be links there, if not Google, you know, whatever your state is and vote by mail or absentee voting, just Google, like New Jersey, absentee voting, things like that. That will get you to where you need to go, but you need to do it now. And if any of this, uh, doesn’t seem trustworthy for you. If this does not seem like the route you want to go, if you don’t think it’s going to reach in time to, to have your vote counted, mask up, glove up, uh, wear goggles. If you have to wear a fricking hazmat suit, if you have to, in order to go vote in person, you know, protect yourself, make sure you minimize the risk of catching this virus, but vote, whatever you gotta do to do it. Vote, do not be intimidated by these poll Watchers that the Republican party is hiring these thugs that they’re sending out there to intimidate you, to get you out of line.

You don’t owe them any answers. If anybody comes up to you in a voting line, you don’t owe them any answers at all. The only person you have to talk to is the person you walk up to at that desk or behind the window, or however it works in your precinct that asks for your name so they can get you your ballot. That is the only person you have to, to talk to nobody else to not fall for their tricks, do not fall for their scams. They’re trying to get you to give up your right to vote because they know how important your vote is. And they know that if you exercise that right, they’re going to lose some power. And that is exactly what needs to happen. But if these lawsuits, if they can not get through the courts, if they cannot get orders from judges to immediately, re-install this postal equipment, we may have to do more in person voting than people would like.

I don’t know that on the state side, on the city side, the precinct side, that they’re going to take all the necessary precautions. So you have to do that for you, wear your mask, wear your gloves, wear goggles, you know, wear ear muffs, ear plugs. If you want to, to kind of make sure you’re, you’re in a hermetically sealed bubble, but do not, do not do not, not vote. That is the most powerful thing you can do as a citizen of the United States. Don’t let them take this away from you because if they do then Donald Trump just won four more years. And I’m not saying that you’re somebody who’s going to vote for Biden or not vote, but whatever it is, I don’t care who you’re voting for. I don’t care if you’re voting for Trump, this is your right to vote and they are trying desperately to take it away from you.

And I think it’s ridiculous to vote for people who want to take that away from you, but Hey, to each their own, right? The fact of the matter is that we have so many factors working against us right now, factors that shouldn’t be there that were put in place solely by Republicans, the attacks on the post office, you know, the voter ID, the voter suppression, the voting roll purges, the poll tax down here in the state of Florida. Every one of these things is a Republican policy, a Republican action, universal vote by mail that’s Democrats there. They’re trying to expand it. Republicans are trying to take it away. So vote accordingly. You can vote for the people who think that you have an absolute right to go to the polls and do that. Or you can vote for the people who want to take that right away from you. It might be the last vote. Do you ever get to cast? So cast it wisely, but for the love of God, whatever you do, make sure that you do cast it.