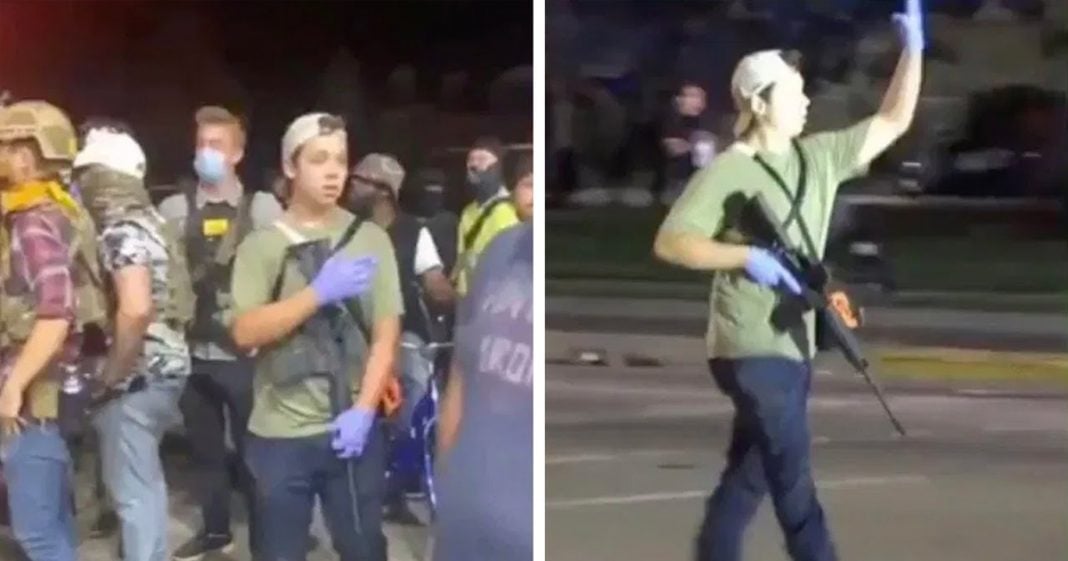 Kyle Rittenhouse, the suspect who allegedly killed two Black Lives Matters protestors in Kenosha, Wisconsin last week has become a hero for the unhinged Right, and a Christian fundraising website has allowed these pro-murder Republicans to raise nearly half a million dollars for his defense. The Republicans are the pro-murder Party, there is no other way to say it. Ring of Fire’s Farron Cousins discusses this disgusting turn of events.

A Christian fundraising site has raised over $220,000 for the accused Kenosha Kyle Rittenhouse, this website called give sin go is kind of the Christian version of GoFund me. And it is supposed to be for, you know, more Christian like activities. But instead these, uh, so-called Christians decided to raise money for written house for his legal defense fund. Their goal was 200,000. And by Sunday morning, they had already crossed that Mark here is what they said and their description for why they’re raising money for Kyle Rittenhouse. I’ll read this, then I’ll tell you all the reasons why it’s wrong in case you don’t already know. Here it is. Kyle Rittenhouse just defended himself from a brutal attack by multiple members of the far leftist group. Antifa, the experience was undoubtedly a brutal one. As he was forced to take two lives to defend his own. Now, Kyle was being unfairly charged with murder one by a da who seems determined only to capitalize on the political angle of the situation.

The situation was clearly self-defense and Kyle and his family will undoubtedly need money to pay for the legal fees. Let’s give back to someone who bravely tried to defend his community, his community, his community, that he had to cross state lines to get to. Now, if I have to drive to a different state, go to a different city, Is that, Is that my community? Is that, is that my home? Is that where I live? No, no. And if I did it, if I went to an area where I didn’t live in a totally different state, you know, it’s not where my car is registered. It’s out where my driver’s licenses. It’s not where my mail comes. So I have no connection to this place at all. And I bring a fucking AR 15 and I shoot two people. Don’t you think that’s actually just straight up premeditated murder?

The answer is yes. Yes it is folks. Yes. Yes, it actually is. And I’m sorry if I seem a little pissed off about this, but this has been a fairly rough couple of days with what is happening in this country. And if you’re not getting angry, if you’re not feeling a little bit more radicalized than you were just a couple of days ago, then you’re clearly not paying attention to what is happening. This is rewrite therapy for these brain dead Christian fanatics. Kyle Rittenhouse very clearly went to Wisconsin with the intention of killing people. Why else would he bring that semiautomatic weapon? Why he had no business being over there? He had no business having that weapon under the age of 18, because that’s yet another thing he was charged with. He wasn’t supposed to even have it. So there’s a law break right there.

And he had a semiautomatic weapon and he brought that with him from Illinois to Wisconsin, because he intended to use it. He was radicalized by the president, by his words, possibly by some of these talking heads on the right. That’s what happened. And I guarantee you, this money being raised in this legal defense, if they think they’re going to be able to get him off, I guarantee you they’re going to have to bring up some of those names in his defense, trying to shift the blame off of this little 17 year old and onto the people who radicalized them. So you better be careful giving money to this because if they can’t blame Kyle, the defense is going to have to blame somebody else. And you’re probably not going to like where that goes.