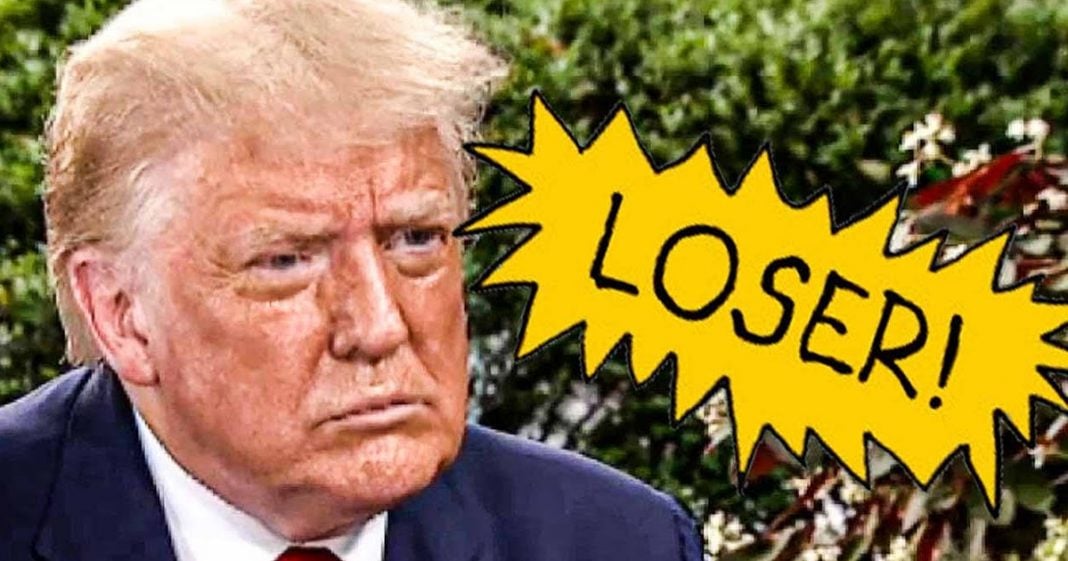 According to a report from The Washington Post, Senate Republicans seeking reelection are stuck between a rock and a hard place, as most voters aren’t happy with Donald Trump, but these candidates feel they have to embrace Trump or face his wrath. They can’t seem to make up their minds about what to do, and that indecision could certainly cost them the Senate. Ring of Fire’s Farron Cousins discusses this.

According to a new report this week by the Washington post, uh, some of the Senate Republicans who are up for reelection in November, kind of stuck between a rock and a hard place, the rock being, wanting to win reelection at any cost, the hard place being, you have to embrace Trump, but the voters hate Trump. So what do you do? Do you go with what the voters want it say? Yeah, I’m Republican, but I’m not like that guy and risk pissing off Donald Trump. Or do you say, Hey, I like what Trump is doing and you should too. And then risk pissing off the voters. Cause if you piss off the voters, you’re not going to win. I mean, that’s, that’s politics one Oh one. That’s literally the first thing you gotta do is convince people to vote for you. Because if you don’t have that, your career as a politician is over, that’s kind of the most important thing you need is people who support you.

And so these Republicans are really, again, the rock and a hard place right now, because even though you know, those of us who spend a lot of time online on social media, you see these hardcore Trumpers. They are not a majority in this country at all. You know, you see clips from Fox news and you see how hardcore the media is. And you see all of these right wing organizations pushing Trumpism. But again, folks always remember, these are not the majority. They do not reflect the will of a majority of people in this country. And that’s probably why these groups are always so angry. If they had everybody agreeing with them, they’d be able to, I don’t know, do a couple segments where they laugh every now and then maybe smile. Maybe have a little fun with their jobs, but they don’t because they know they’re always fighting from behind because their positions, their ideas are horrible and most people reject them, soundly reject them.

So that’s where we’re at right now. That’s why Trumpism isn’t as popular with voters. That’s why Donald Trump’s approval rating has been under water since day one. And that’s why these Republicans running for reelection don’t know what to do. Do they go out? Do they separate themselves from Donald Trump? Do they separate themselves from his unpopular policies, including his immigration policy, including his trade war, including his pathetic and deadly handling of the pandemic. Do they reject all of that and have him send out horrible tweets or do they embrace it all and risk alienating voters? Here’s the thing. And this is what I don’t understand that Republicans don’t understand the public. Doesn’t like Trump. They really, truly do not. So if you piss him off and he goes after you on Twitter, so what, that’s not going to change their opinion because they already don’t like him.

They’re your constituents. He is not. If they don’t like him, they’re not going to care if he attacks you. In fact, that would probably endear you in their eyes. I mean, right. There’d be like, wow, okay. This guy definitely rejected Trump him. He hates him. Look at what he tweeted about, uh, our, our, our guy. I like this guy now because Trump hates it. I mean, look, I can say this because I’m not actually worried about any Republican Senate candidates watching this video and thinking, you know, having that light bulb moment of Holy crap. He’s right. So I’m just going to let you, do you, you remain paralyzed with fear because you don’t know if you need to placate the actual people who are going to vote for you or the crazy man with the large Twitter following who would go after you on social media. If you ever said an unkind word about him, that choice is 100% up to you. And we’ll see what happens in November.