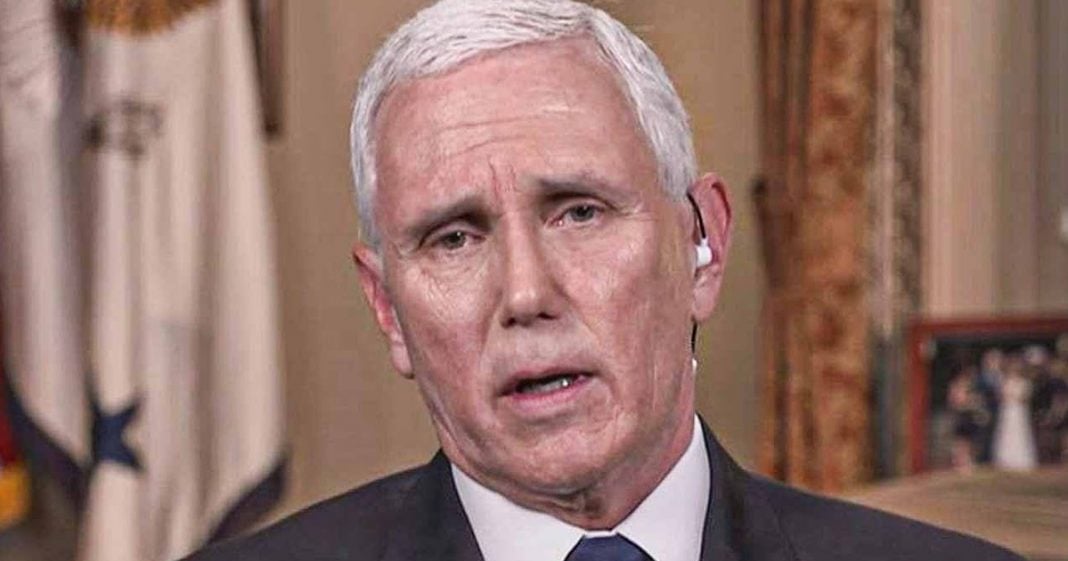 Donald Trump has gotten most of the blame for his horrendous handling of the pandemic, but a new report this week explains why Mike Pence deserves a good share of the blame, as well. According to the report, when Pence took over the pandemic response from Health and Human Services, he put the brakes on the response in order to protect the economy. Ring of Fire’s Farron Cousins explains what happened from there.

Donald Trump rightfully has received nearly all of the blame for his response to the pandemic. And the fact that we are now approaching 180,000 Americans dead. Donald Trump is the guy in charge. He is the president. The ultimate blame does lie at his feet, but vice president, Mike Pence is not out of the woods here. In fact, he deserves an actually a very large share of the blame. According to a new report from Politico this week, Mike Pence is the one who in the early days of the pandemic response, decided to put the brakes on the federal government’s response, because he didn’t want to spook the economy. Mike Pence, to put it another way, put money over the lives of American citizens. Here’s what happened according to this report, based on a documents obtained by Politico. Mike Pence in early February of this year, took over the pandemic response at the request of Donald Trump. Uh, prior to that, it had been handled up to that point by health and human services. Secretary Alex Azar, Mike Pence came in and as the report says, immediately put the brakes on every single thing that HR had been attempting to do up to that point, which means specifically, and this was one of the big ones. Mike Pence refused.

I used to essentially Shut down the cruise ship industry. I remember the early days of this, those cruise ships, those were hotbeds of infection because they’re just basically giant floating Petri dishes out there on the ocean. They pollute they’re disgusting and they spread diseases like wildfire because you’re in closed space and you can’t get away. Pence wouldn’t do it because he was afraid that not only would that hurt that industry, but it would send shock waves through the rest of industries across this country causing tons of money to be lost tons of economic activity to be lost. And then the economy would crash for what saving a few hundred thousand lives. Totally not worth it for Mike Pence. So he waited and he waited and he waited finally decided to take action. But at that point, as this report points out, it was too late. The biggest damage had been done. And guess what? Here’s the real kicker. Here’s the real irony. The economy still tanked.

He could have. If we had had competent leadership in Washington, D C things, wouldn’t be the way they are right now. We wouldn’t still be working from home. We wouldn’t be terrified to send our kids to school. We would have had this thing under control. Like most of the rest of the world already has, but instead we, these two brain dead morons running the federal government, Donald Trump and Mike Pence, who don’t know what they’re doing. They put money over the lives of American citizens every single time, including Mike Pence, who’s supposed to be the big Jesus guy still can’t follow a single teaching in the Bible because the only thing Pence actually worships is money. And that’s why we are where we are. They put profits over people and guess what? They still managed to tank the economy in the process.