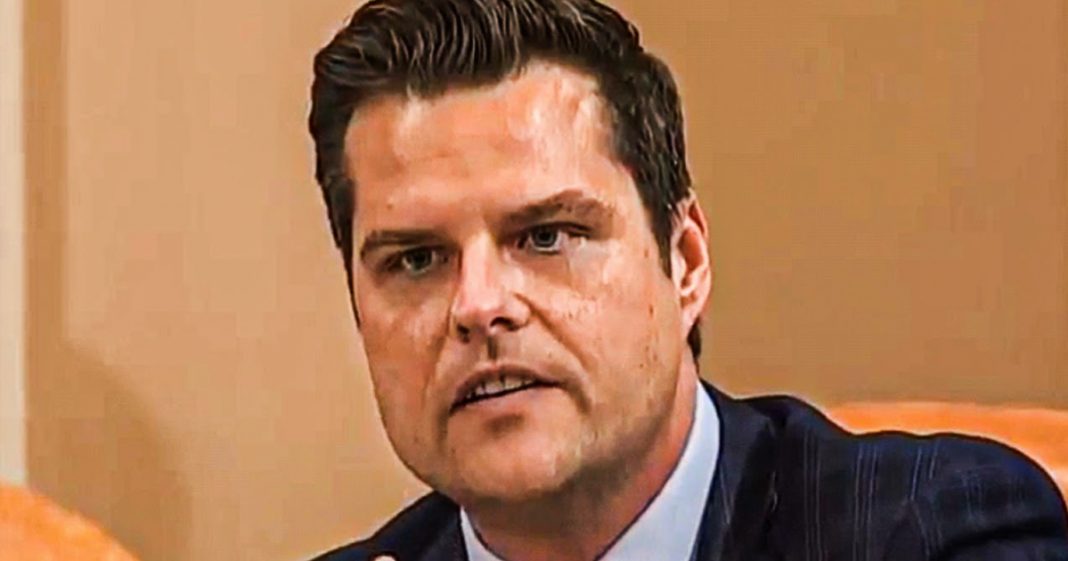 The House Ethics Committee finally released a report late last week where they revealed that the entire committee voted unanimously to admonish Republican Congressman Matt Gaetz for his tweet directed at Michael Cohen in early 2019 where he appeared to threaten Cohen prior to his testimony before Congress. The Committee didn’t find that Gaetz broke the law, but the embattled Florida Man is certainly feeling the heat after a barrage of scandals. Ring of Fire’s Farron Cousins discusses this.

Well folks, it has been 18 months since Michael Cohen appeared before the us house of representatives where he implicated the president of the United States in bank fraud. But the night before that testimony, Republican Congressman Matt Gaetz sent out a tweet directed at Michael Cohen that got Gaetz in a lot of hot water. The tweet was, Hey, Michael Cohen, do your wife and father-in-law know about your girlfriends. Maybe tonight would be a good time for that chat. I wonder if she’ll remain faithful when you’re in prison. She’s about to learn a lot. Now, everybody at the time viewed this as very clear witness intimidation on behalf of Matt Gaetz, who is a good friend and supporter of Donald Trump, he was trying to coerce Michael Cohen to not give up the game on Trump, by threatening to expose him, or actually exposing him for his, all his girlfriends. That, by the way, I don’t think this was ever really talked about why would Matt Gaetz know this?

Matt Gaetz didn’t have a relationship with Michael Cohen. So who told that the mad Gaetz was it Trump himself? I’m starting to think it kind of was, but nevertheless, that’s neither here nor there what’s important is that 18 months after you sent that tweet, the house ethics committee last week finally decided to punish him in theory, uh, the house ethics committee voted unanimously, uh, in a report released last week to ed Matt Gaetz. And in case you’re wondering, admonished does not mean remove from office does not mean put in prison. It means let him know that you don’t like what he did. That’s punishment. 18 months later, it took them 18 months to write their little report saying, yes, he is such a bad tweet. It was stupid. He’s an idiot, but technically it didn’t break, uh, you know, witness tampering or obstruction of Congress laws. So we can’t really punish them. Essentially. They’re saying the same thing that the Florida bar said after they concluded their investigation and a Matt Gaetz, which this is actually in the investigative sewed committee in the house. This was in their report. You know, noting that a grievance committee of the Florida bar found representative gate’s tweet to be quote unprofessional, reckless insensitive, and demonstrated poor judgment.

I mean, all of those words, if you just take out the tweet part that is also perfectly describing Matt Gaetz, a unprofessional, reckless insensitive, and demonstrates poor judgment. Like that’s what Matt Gaetz should have on his business cards. That should be his Twitter bio, because that is exactly what he said he is, but they said it did not rise. Both the Florida bar and this house, house ethics, uh, subcommittee subcommittee, uh, they’ve said, yeah, the guy’s an idiot. The guy did something very stupid, but unfortunately we cannot say that it amounts to witness intimidation, even though it’s kinda obvious, isn’t it? I mean, let’s not kid ourselves about what this is. I know the laws, the law, and we have to follow and you have to be able to prove the intent and all that. But it’s obvious why Matt Gaetz did this. Right. But, Oh, well, so Matt Gaetz got away with one, right?

It’s not like he’s scot-free. He is after all, currently in hot water over the fact that he used $28,000 in taxpayer dollars to hire a, uh, essentially huge racist guy who was fired by the white house for being racist. He hired him as a speech writer. Oh. And there’s also the issue of the TV studio that Gaetz had created in his father’s house. And that they get to bill taxpayers for every time he goes on TV. So yeah, there’s other skeletons and Matt Gaetz his closet, a closet that by the way, uh, Gaetz said earlier this week, and I don’t know why I said clause. It’s not related. Gaetz actually said earlier this week in his speech at the Republican convention, that Democrats were going to welcome criminals into this country. They’re going to move right next door to you. All these criminals, criminals, criminals, criminals.

They love him. Dude. You have been under investigation more than any Democrat in office right now, or any Democrat running for office. How can you with a straight face, sit up there and say, look at these criminals. Oh, it’s going to be so bad. How’d you get out of your DUIs, bro? What’s up with that TV studio? How much of my tax dollars did you use to pay for that? All because we wouldn’t let you come in and use our studio by the way. Um, yeah, this guy’s got some big problems, but I would think his hypocrisy is probably at the top of that list.