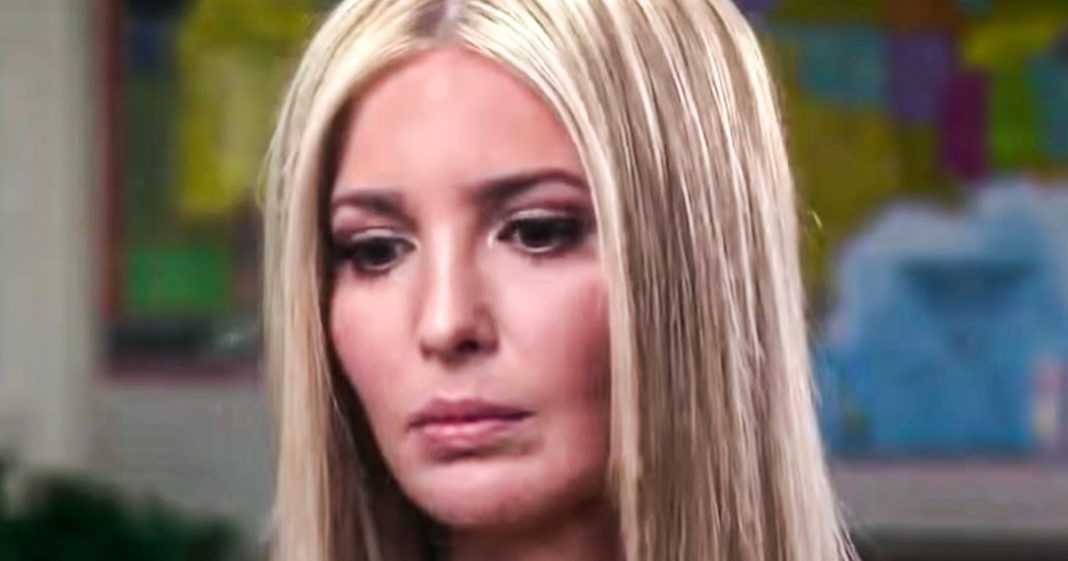 In new audio released by Mary Trump, the President’s niece and Ivanka Trump’s cousin, Maryanne Trump Berry is heard making disparaging and insulting comments about Ivanka and Eric. Eric is described as a moron, but the name for Ivanka is even worse…Maryanne says that she is just like a Mini Donald. Ring of Fire’s Farron Cousins explains what this means and why, for some people, it was obvious from day one of this administration.

On Friday more secretly recorded audio from Donald Trump’s niece. Mary Trump was released on MSNBC. The audio feature, Donald Trump’s sister Maryanne Trump Barry talking disparagingly about Eric Trump and Ivanka Trump. And once she said in the audio was a, was absolutely fantastic. First and foremost, she said that Eric Trump was the moron. Now she said a quote, she’s singled him out. As the moron saying Eric’s become the moron publicly. So publicly the public perception of Eric is that he’s a moron to Eric’s own aunt a hundred percent accurate, by the way. Yes. According to the media, the way he is portrayed, he is a moron. And the reason he is portrayed as such is because that is the image that he gives off. It’s not just the media trying to say, Hey, we’re getting back like this guys. Ain’t no, he does a lot of stupid things, says a lot of stupid things, uh, does a lot of, you know, shiesty kind of things like the whole stealing money from the kids cancer charity thing.

So, you know, yeah, I’d say it’s a fair, uh, depiction by the media, but that wasn’t even the harshest of the criticisms that Marianne Trump leveled against the Trump children, harshest criticism was saved for Ivanka, who she referred to as Mini Donald. And yes, that is worse than being called the moron, a mini Donald. That is exactly what Ivanka Trump wanted to avoid. That is the perception that she does not want the public to have. Let’s think back. Let’s think back to December 26, 16 and January of 2017 prior to January 20, what were the reports? The reports coming out with that Ivanka might actually be the voice of reason. Ivanka might be the bridge to the liberals. She might push the president left on LGBTQ issues. She might push the president to do something about climate change. Remember all the meetings that were taking place in Trump tower with all those liberals started showing up there and having these meetings and Ivanka was going to be the one to push him left on all these issues.

And then she didn’t do a dang thing. Like not once that all, except of course get all of those, uh, you know, patents from China that I’m sure helped her. Um, she didn’t do anything else though. She got things that are gonna make her money in the long run, uh, gave us the impression she was going to do something to help average Americans, but really only, uh, did stuff for herself now, who does that sound like? Sounds a lot like Donald Trump, right? Because that is exactly what she is. You know, a lot of us actually called that out at the time. Some of us didn’t believe for a second that she was going to be the voice of reason or that she was going to bring this bastion of liberalism to the Trump administration. We knew that wasn’t going to happen. It took some media outlets all say a year or two before they finally came around to that before she finally admitted in interviews that, yeah, I really have no control over what my dad says or does, but these outlets continued up to that point of painting her as some kind of voice of reason at the same time. And this was when this audio was recorded with Maryanne Trump. She knew, she knew what Ivanka was all about. Ivanka is all about Ivanka and that’s what she goes on to always say to not, excuse me. That’s what she goes on to say in that clip that was played on MSNBC.

Yeah. It’s really interesting here to look at the dynamic because we have somebody in this administration Ivanka that is so much like her father, but she tends to get the free pass. I mean, I know we see stories about her all the time, but it’s always a little more gentler. She’s always being handled with kid gloves by the media. Now compare that to the heir apparent Donald jr. Right? Hell New York times last week put together a huge, huge thing on Donnie, jr. And about how Republicans are already starting to kind of shape him up and groom him a little bit for a 20, 24 run ad speculation has been out there for a long time. Junior’s going out there on the campaign trail. He’s getting people whipped up for his daddy. His girlfriend’s doing the same thing. She, she yelled at everybody, uh, on live TV during the Republican convention. And they both got really horrible negative press for it. They’re becoming the people much like their dad who you love to hate, but you probably wouldn’t trust them all that much Ivanka, even though she has had the negative press, even though she has had reports of hatch act violations, reports of FBI investigations, just like her husband, she is still not treated the way her brother is or her father is by the media. They’re still overly nice to her.

And that’s the one we need to be aware of. She is the mini Donald. She is in this for herself as her aunt says as her cousin says, but because she does not get as much scrutiny and criticism as the other members of the family that might set her up to be in a position where she could convince enough people to vote for her, for president of the United States. But then she’d be no different than her dad. Oh, maybe we’d get one or two social issues out of her. Probably not, but I’m sure she’d convinced us that she would just like she had a good portion of the liberal side of things convinced back in December, 2016, that she was going to somehow bring their concerns into the white house, but never did it because she never had any intention of actually doing it. She, in my opinion is in the best position right now to shape her own future, to run for president in 2024.

Because if her dad wins reelection, if he stays in the white house, she then gets to spend the next four years learning on the job. If she chooses to most people don’t even in the cabinet. Most people don’t even know why she’s there, but she can learn some things enough to kind of act like she has the experience. She can pepper in one or two decent things that she can put her name on, setting herself up for that 20, 24 presidential bid. And I think out of everybody in that Trump family, she is the most threatening because she, as the family says is the most like Donald Trump, but unfortunately not enough people in this country see it yet. We see it with Donnie jr. We see it with Eric, the moron. It’s a little bit harder to see with Ivanka and because of that, because she can actually smile on like other members of the family because she doesn’t come off as super crazy how she doesn’t even really come off as arrogant. Most of the time, most of the time she can con enough people just like her daddy did to win a presidential election. And that to me is why she is the most terrifying of all the Trump kids.