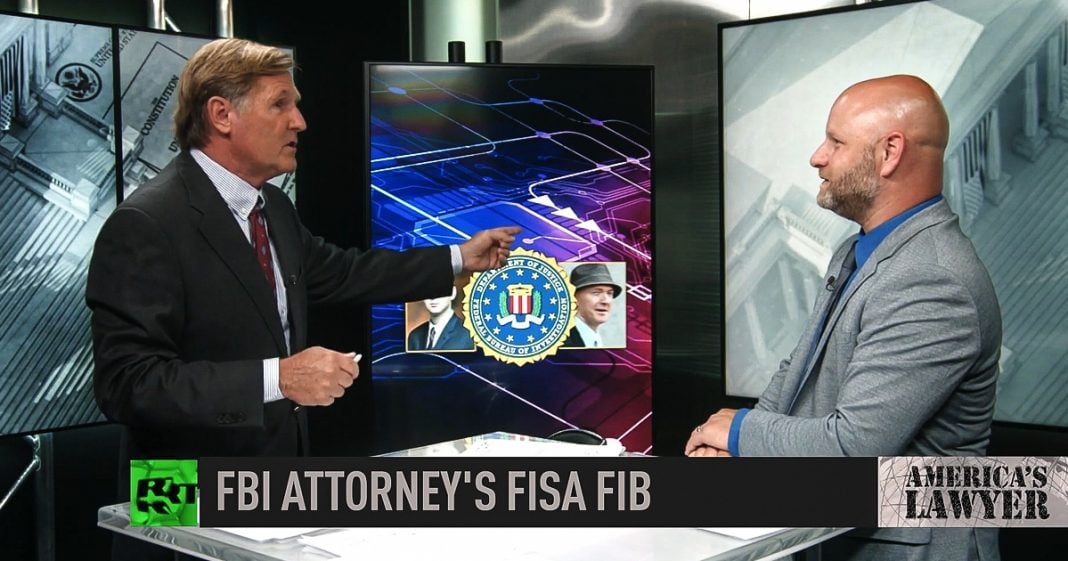 Mike Papantonio: A former lawyer for the FBI is preparing to plead guilty to doctoring a document that was used to justify the FISA warrant against Carter Page. Okay, let me just say this, wherever you fall on Russiagate, here’s the problem with this, you don’t have the spook industry setting out to impact a presidential election. That’s what they do in banana republics. That’s what you expect in South American countries that are third world countries, where you have the spook industry that decides who’s going to be the next president. That’s really the overwriting issue here, regardless of where you land on this.

Farron Cousins: You know, this story is looking worse and worse. You know, especially at this point right now, I don’t think very many people unfortunately paid attention to this news that broke. What was it, last Friday, which is, that’s don’t ever break news on Friday. That’s where news goes to die.

Farron Cousins: Right. But this guy has said, okay, listen. Yeah, I submitted the stuff to the court for the FISA warrant. I doctored this piece of evidence. It is reported that he also included the original document in there. So I don’t, I don’t know a lot about that in particular, but he did doctor a piece of evidence to the court, indisputable.

Mike Papantonio: With, with an intent.

Mike Papantonio: Let’s get to that point. He intended to put something in motion that was going to affect the other candidate who was happen to be Trump, that he didn’t want elected. So he makes, he phoneys up material, puts it in front of a judge. The judge has no way of knowing. The judge, judge doesn’t know that the spook industry has phonied up material that has created this entire chain of events. I don’t care where it lands. I don’t care that the Russian, the Russians probably did hack and they probably had some invol, involvement in this election, just like we do in other countries, but you don’t have the spook industry determining who’s going to be president.

Farron Cousins: Right. And his, his justification for it is almost comical because he claims, this former lawyer, who’s a very young guy, by the way, he says, well.

Mike Papantonio: And the worst thing is you got the department of, you’ve got the CIA and the FBI saying, hey, let’s get together and effect a presidential election. I don’t care who you were for. Whether you were for Trump or whether you’re for Hillary, it doesn’t make any difference. You don’t have the spook industry determining who is president of the United States and that’s what happens in banana republic, third worlds. And they better get, this is just the beginning.

Mike Papantonio: Because if you, if you think this guy pleaded without saying naming names, trust me, the guy there, Durham, who’s doing the investigation if you remember is the same guy who did the investigations on Guantanamo.

Mike Papantonio: You know, he’s the one that said, hey, you, you, you better get control of how you’re treating these prisoners and he’s very vocal about it. He did a great investigation. So he straight up these people involved with this, they think it’s over. It’s just started.

Mike Papantonio: A California appeals court has revived a lawsuit by Orange County residents that accused the police of conducting an illegal informant program in local jails that undermine justice for decades. Brigida Santos joins me now from Los Angeles. Brigida, when did the OC jailhouse snitch scandal first come to light and what did it reveal? How did all this start?

Brigida Santos: Well, the scandal was uncovered by Orange County assistant public defender, Scott Sanders, during the trial of Scott Dekraai, who fatally shot eight people at a seal beach hair salon back in 2011. Now, during hearings, in that case, it was revealed that a jailhouse informant had obtained a confession from decry that informant Fernando Perez is a former leader in the Mexican mafia. He had a lot to gain by getting this confession. Public defender Sanders noticed that Perez had also obtained confessions from other clients, which prompted him to investigate a little bit further because it seemed very fishy. Now, after digging around Sanders discovered that for 30 years, Orange County’s Sheriff’s deputies were secretly housing jailhouse informants near high profile defendants to obtain confessions and collect information.

Informants often did this by threatening defendants with violence or even murder in exchange for money or reduced sentences. While it’s not illegal for law enforcement to use jailhouse informants, it is illegal for law enforcement to send informants in, to get confessions from defendants who have already been charged in a crime and have the constitutional right to have an attorney present. It’s also illegal for prosecutors to purposely not disclose evidence about informants to defense attorneys and to lie to the court, which is what the allegations are in this case.

Mike Papantonio: Yeah, Brigida it’s even to me, the bothersome thing is the way they would get the con, the snitch would get confessions, is they would beat the ever living daylights out of the people that they wanted to get the confession from, or they threatened to murder them or threatened to murder their family if they didn’t confess. I mean, there’s this really, really dark, dark story. How did the program derail justice for plaintiffs just in, in, in lawsuits? What, give me, give me an example of that. How did that end up happening? How did it actually derail the entire claim?

Brigida Santos: Well, the American civil liberties union, which filed the original case back in 2018, on behalf of Orange County taxpayers, they documented at least 146 cases since June of 2016, where the district attorney’s office broke the law in failing to turn over evidence about an informant program. Now, the lower court initially ruled that the plaintiffs did not suffer direct harm so that they didn’t have grounds to sue. Even though one of those plaintiffs is the sister of a woman who was killed by Scott Dekraai, her family was denied justice for years due to delays in this case because of revelations about the program. In another case, information came out that would have a prisoner, but the DA’s office didn’t want to admit that they had obtained it through this program. So they did not let that guy out of prison. Now the appeals court has just overturned the prior ruling stating that the rights to due process and the assistance of counsel are public rights that every citizen has interest in upholding. So this is now going to go back to the Orange County superior court for a trial or a possible settlement.

Mike Papantonio: Okay. Okay. So here’s the, here’s how this works, the prosecutor or the media or the, the police department, the law enforcement, they can’t go in and beat the ever living daylights out of a snitch and tell them that you better say this, or else. You better do this or else we’re going to kill your family. That’s the kind of threats that are coming from the, the cartels that are locked up with these folks. And just like you say, you know what, they don’t have anything to lose. There’s, there’s nothing to lose, except they get a deal in the end. They, some of them make money. Some of them get their sentence reduced, but this is a, this is, this is an ugly story and it seems to be getting uglier if they don’t get into control. And you know what, it’s probably happening all over the country. What do you think Brigida?

Brigida Santos: Absolutely, it’s happening across the country. Not only are these types of confessions, questionable, protesters are rallying against police brutality and corruption and prosecutorial misconduct goes widely unnoticed, but prosecutorial misconduct is just as important. The district attorney and state or federal attorneys general have the ultimate power over policing. They’re often too symptomatic when it comes to police abuses because they see themselves as part of that same team. Prosecutorial misconduct is a leading cause of wrongful conviction. It’s sending innocent people to jail for years, in some cases, even for life and some of these people, as you said, they have nothing to lose. They’ll give people up for something as small as $25 or even a pack of cigarettes. And it puts these types of confessions, the credibility of them, in question.