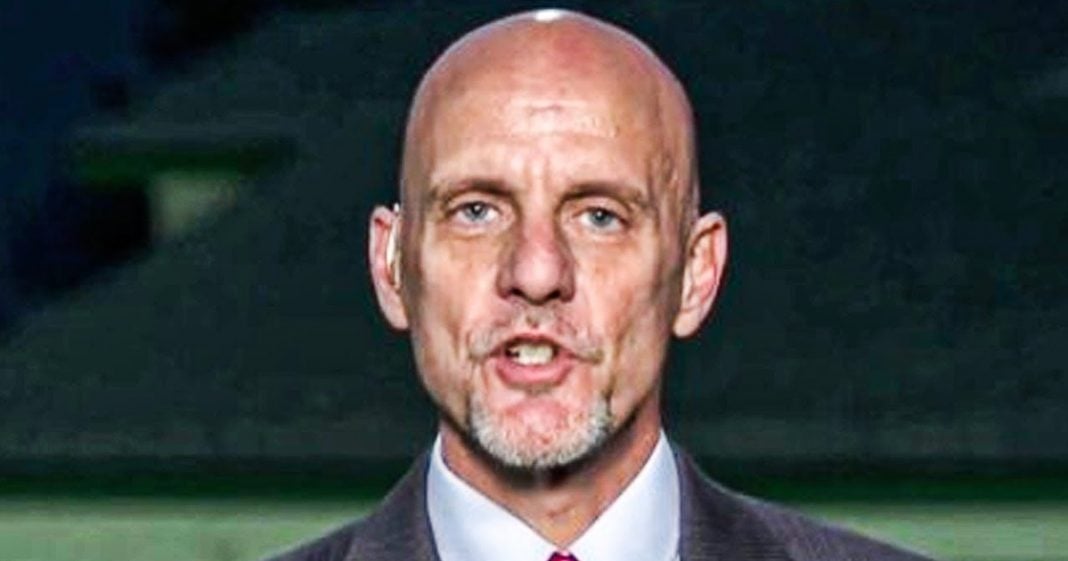 FDA Commissioner Stephen Hahn is  in hot water after the world busted him presenting altered data on a plasma treatment that the President had touted as a great treatment for COVID-19. Hahn stood beside the President the other day when he said that the therapy had shown wonderful results, when in fact it hadn’t shown anything like it. Hahn has apologized, but his reputation is forever ruined. Ring of Fire’s Farron Cousins discusses this.

Steven Hahn, the commissioner of the food and drug administration is under heavy fire right now, after coming out on Saturday alongside Donald Trump in a coronavirus press briefing where Hahn touted a controversial treatment for COVID-19. He said that, uh, plasma therapy essentially, uh, to kind of boil it down to its most basic people with COVID-19 who are receiving plasma are getting better at a rate of about 35% of people receiving this treatment overcoming COVID-19. It’s almost like a miracle Donald Trump had in the past also touted this kind of treatment. So he brings out the head of the FDA to tell us how awesome this treatment is and how effective it is at treating this horrible disease. There’s just one problem. And the medical community was very quick to point this problem out immediately following Hahn’s press conference. It’s a lie. The success rate is not 35%. The success rate is actually three to 5%. So you see what Hahn did there? It says three to 5%. He just said, I’m going to put those numbers together. And it’s 35%. He made it up. He absolutely altered the data in his own mind, made up a new number and said, Nope, 35% of people getting this treatment. Uh, they get better.

No, in fact, the success rate of this treatment is so small that it’s almost indistinguishable from that of a placebo three to 5%. Get better after receiving this treatment. That that’s not exactly something to be proud of. That’s not something to ride home about. That’s not something to be optimistic about, but here we have the commissioner, the guy in charge of the food and drug administration, a guy who, by the way, Stephen Hahn is an oncologist. I went back and I looked through his history trying to find, you know, whatever the corporate ties were. Cause we’ve seen that with many FDA commissioners over the last 20 years. So I assume this was a guy, much like Alex AEs are, that came from industry, you know, a total sellout. Somebody was willing to say whatever needed to be said for money.

It’s not there in this guy’s history from the best I could tell from looking into it. And maybe I missed some things. Please point them out if I’m wrong, but I couldn’t find him. This guy was just a good oncologist, a good cancer doctor. And then he joined the Trump administration and ever since then, he has gotten popped time after time, after time for lying about science, for phoning things up just like he did on Saturday and essentially selling his soul for fame and fortune. So unlike past FDA commissioners, this guy didn’t sell out and that’s why he got the job. He got the job because he was willing to sell out in order to get it. This is a big deal. He went out there and he said, if you use this treatment, essentially have a one in three chance of getting better. That’s not the case. You have a 97% chance of it doing absolutely nothing for you.

Yes, I have as much of a chance of dying from this disease as you do of this particular treatment actually curing it. It is not effective. We’re still trying to find things out and I am not opposed to testing things and trying things. That’s what we have to do. But until we know for certain, until the proper studies have been done, this administration is acting incredibly irresponsible going out there and touting treatments, whether it’s, you know, the, the, the chloric queen or these plasma treatments that don’t actually work and they’re doing it so that they can make, make themselves look better and try to convince the public that things aren’t as bad sleek as they seem.