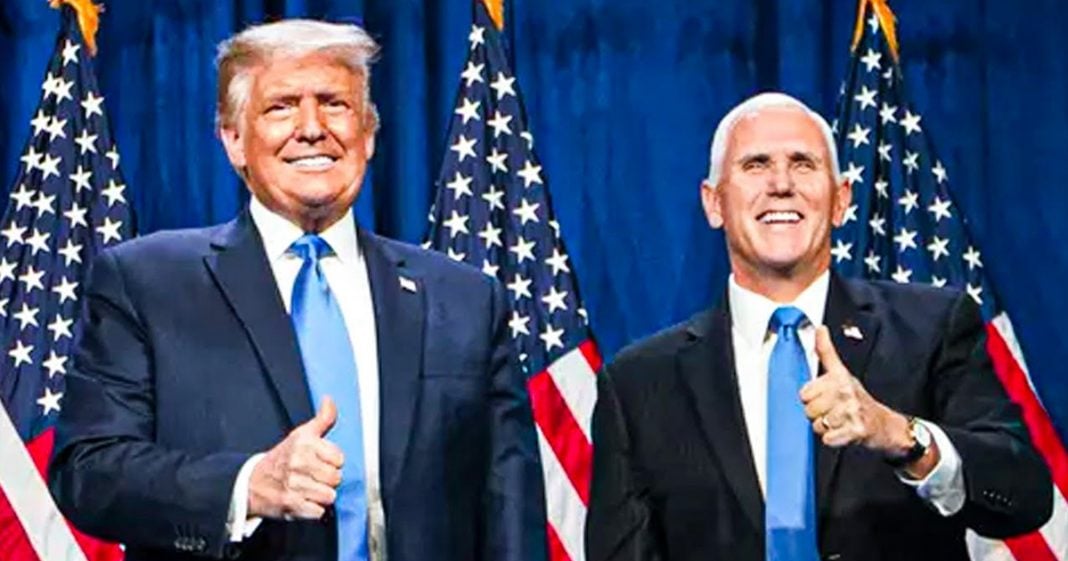 According to the fact checkers at CNN, the Republican Convention has been little more than a parade of lies, with over-the-top personalities pushing out blatantly false information. This isn’t a surprise at all, as the Republican Party hasn’t had anything concrete to talk about in nearly 40 years. Since they have no ideas and no actual platform, they have to resort to cheap theatrics and lies in order to sway voters. Ring of Fire’s Farron Cousins discusses this.

According to the fact checkers at CNN, the Republican national convention so far can best be described as a quote parade of dishonesty. And by dishonesty, they mean that the whole thing has been filled with lies, distortions, misinformation, lies of omission. Overall, the best way to say it is they’re just lying their butts off throughout this entire convention. That’s what we’re seeing coming from the Republican party. Uh, whether it’s misinformation about what Joe Biden’s platform is, uh, whether it’s straight out lies about what the democratic party actually believes in what they want to do and things that they have said, uh, we have seen them fabricate quotes, fabricate policies, create this Fidel Castro like image of a Joe Biden that simply doesn’t exist.

Just all to sell themselves to the American public. And as most people understand, when you have to lie about somebody else in order to make yourself look good, uh, you’ve already lost the battle, but, but that’s what we’re seeing with the Republican party. That’s why it is as CNNs. Danieldale described it a parade of dishonesty because the Republicans have nothing to Talk about. I have said Repeatedly over the years that the Republican party hasn’t had a new idea in 40 years. And that last new idea by the way was trickle down economics. So it wasn’t even a good idea, but at least for them, it was new. But ever since then, that has been their response to everything. Every bad thing that happens. Every good thing that happens anytime they need a policy, let’s just cut taxes. How about that? How about we just cut taxes. Everybody likes tax cuts. Let’s cut taxes. So when you have four nights, when you have to go up and talk about things that aren’t tax cuts, you look back at your history and realize, Holy crap, we haven’t done anything in 40 years. What do we do?

Uh, Hey, You know, this guy wants ms. 13 to move next door to you. That’s what Matt Gates said on Monday night, literally, I said, that said, Joe Biden Wants to let ms. 13 move next door to you. And that’s, you know, ms. 13 is like the new bogeyman of the Republican party. Right. They only pull it out when they actually need to scare people. But the rest of the time, they’re like, what, what is that? Does it just letters and numbers? I don’t understand it. Oh, yo no, no. It’s the bad thing. Yeah, they don’t actually understand it. Um, but nevertheless, the Republican party had nothing to talk about. They had nothing to boast about with regards to any of their so-called accomplishments over the years. So they lie about their opponents. They lie about what they want to do. They lie about what this country would become. If the Democrats were in charge for getting the fact that just four years ago, we were coming off eight years of a Democrat in the white house.

And none of the horrible predictions that they made ever came to fruition. We didn’t end up with death panels. We have them now with COVID though, you know, where the doctors have to decide like, is it worth treating this person, this elderly person? Or should we treat the younger person? Do we give them the ventilator who gets it? Because we’re running out of equipment and we have to make that decision that that’s death panel, that’s death panel brought to you by the Trump administration because of their incompetence in handling this pandemic. Did they come door to door and confiscate your guns? Anybody, anybody at all? Did you see Obama going around and doing that? Like Republican said he would no, no you didn’t where their bread lines where they’re empty grocery stores. No, we’ve had those this year though. We’ve actually had those this year and we had it for months. Not just a brief like, ah, then it’s over. No, no, no, no, no. We were out of things for months and Republicans, even during that time, even though they were in charge, kept saying like, this is what socialism will do, bitch. That’s what capitalism did. That is what capitalism did. Capitalism allowed people to go and stock pile supplies, right? As the pandemic hit, then sell them for a hundred times what they paid for them on Amazon.

That was capitalism. And that’s why Republicans can’t talk about that at their convention either. So they resort to these ever more childish lies because the same old, same old lies don’t work anymore because they’ve already been proven wrong on those. You know, like I mentioned came off eight years of Obama, none of those crazy lies they said back then came to fruition. So they have to up it. You know, they have to go a little more extreme. And to me, honestly, Matt Gates is the best example because aside from Kimberly Gilfoyle’s screaming and Mike Pompeo’s illegality Gates is the one who truly just went totally overboard. Like he was just making stuff up. Like it was some kind of political Madlibs where he just had to throw in random verbs and adjectives and names of scary things. And that was his speech that all Joe, Biden’s a puppet.

I, ms. 13 is gonna move next door to you. They’re going to open the borders. They’re going to take your guns. They’re going to do all this crazy stuff out there. All criminals. He said, the man who’s been under investigation, uh, three or four times in his four years in Congress, he’s averaging one investigation for potential criminal activity. Every year he’s been in office. Uh, I’m not going to take his advice on who is and is not a criminal. Oh, let’s also not forget about the DUI that his daddy got him out of in Florida because he knows people. They actually fired the cop who arrested him for DUI. That’s how powerful his daddy was here in the state of Florida. That’s why Matt Gates is where he is today. And he has the audacity to go out there and make up these lies about the Democrats.

When he himself is the one with the checkered past the one that he has not fully answered for yet. But again, they don’t have to make stuff up about the democratic party. If they, as real conservatives had issues with some of the stances that the Democrats have taken, they could have done that. See Republicans understand their base. I think in a way the Democrats don’t, they know that they can’t go out there and talk policy. They know that they can’t actually go out there and really just hammer the Democrats on real things, because that’s not what their base wants to hear their base. Believe it or not in the polls have shown this over the years, their base actually agrees with the democratic party on many issues. Not all of them, but on many of them, things like universal healthcare, believe it or not majority slim majority, but a majority nonetheless of Republican voters actually say, yes, I want that environmental action.

Majority of Republican voters say, we need to do something about climate change there. Their party’s not exactly letting them do that, but that’s why Republicans resort to the lie. Not just because they have no accomplishments to speak of, but because if they talked policy, their base would realize, Holy crap, I’m in the wrong party. So they go back to that one thing that has always worked for them, fear, it’s that fear that they sell. That’s what they’re selling with this parade of dishonesty. As Daniel, Dale from CNN called it, they’re selling fear. They’re trying to motivate their base with fear, painting these bleak, horrid pictures of your future. In just a few months, if Joe Biden were to win the election folks, that’s not going to happen. Biden himself has said it. And I think this is something, you know, we all need to believe nothing will fundamentally change if he becomes president.

And I know he was saying that to the wall street types, but that’s pretty much true across the board. Nothing’s going to fundamentally change. You are not going to see open borders. You’re not going to see ms 13 moving next door to you. Not that any of you would recognize it. If it did what you’re going to see is things slowly behind the scenes being put back together, you know, improvements that are going to be so minor that you’re not even going to notice them, but it’s going to be undoing the damage that Trump and the Republicans have caused. That’s what Joe Biden’s gonna do. Not this nonsensical fairy tale, uh, you know, terror that the Republicans are trying to sell us.