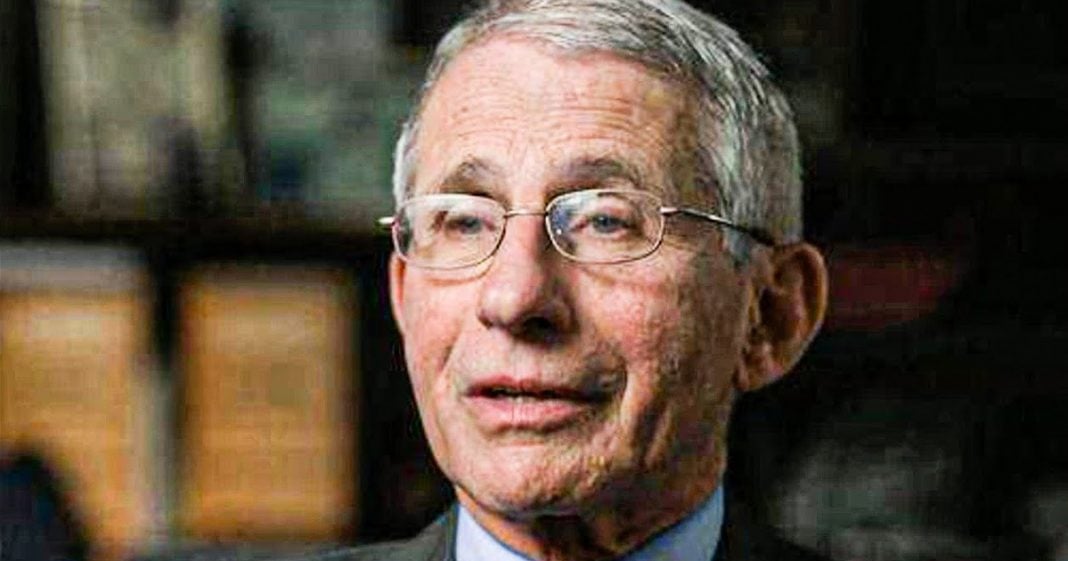 Donald Trump loves to tout unproven treatments and other measures that he feels can help patients with COVID 19, and Dr. Anthony Fauci has had to once again come out and not only correct the record, but warn about how dangerous Trump’s claims really are. According to Fauci, Trump’s recent claims about vaccines (even though none have been approved and few have been tested) is actually hurting the chances of scientists being able to develop a real vaccine. Ring of Fire’s Farron Cousins explains what’s happening.

Dr. Anthony Fauci did an interview with Reuters news service earlier this week, where he wants again, had to kind of correct the record about what Donald Trump was out there saying about treatments for COVID-19, uh, letting us know that none of the things that Donald Trump or certain other members of this administration, like Steven Han and Alex Azar, uh, none of what they have been touting recently, as recently as this past weekend is actually proven. Um, none of these vaccines that we’re seeing, you know, emerge, uh, like the one in Russia, uh, we’ve got others in Europe that are popping up. None of those are actually proven yet. Uh, they haven’t actually been tested. They haven’t even been around long enough to have been tested. And Fauci says that Donald Trump, and of course the other members of this administration, like a Han, and Nasar the ones who are pushing these things and telling us like, Hey, great, we have this, we have this, this is on the horizon.

This is a good treatment. Uh, none of them are at Fowchee is now warning that this is actually hindering our ability as a country to develop an actual vaccine, to develop something that actually works. Because when Trump goes out there and says, we’ve got a vaccine, Russia’s got one over here. We’re going to, we’re going to get it for them. Or this country has on, we’re going to get it from them. Or when, Hey, all you gotta do is do this plasma treatment with hydroxychloroquine and then you’re cured. No big deal. When he says thing likes things like that, Fauci, she says, it makes people unwilling to sign up, to be volunteers, to test out these vaccines in the clinical trials, which is a vital step to getting any kind of medical treatment approved. You have to test it on people. Otherwise you can’t get it approved and you can’t sell it and you can’t make it.

So that’s where we’re at right now. And Fauci, uh, is not very happy obviously with the fact that this administration keeps pushing these phony cures, these phony treatments, things that have not been tested, things that have not been studied. I know we’re all tired of this. We all want to go back to life as normal. We want to get on airplanes again, and we want to travel and we want to take a vacation and we want to be able to send our kids to school. We want to go out to a restaurant. We want to walk into a grocery store without having to wear mask, but we’re not there. We’re not close to being there. We’re not, we’re not close to having a vaccine. These things are not right. They’re just a month away. We have a long time of going through this, and yet it’s sucks for every single person.

It sucks for some people, a hell of a lot worse than it does for the rest of us. The people actually complaining about it, but suck it up folks. This is our reality. Now there is not going to be a miracle cure. There is not going to, you know, we’re not going to wake up tomorrow and suddenly somebody is going to say, Oh, I’ve got this magical elixir that I immediately cures. COVID-19 here you go. Not going to happen. Absolutely not going to happen. And that’s what Fauci’s trying to warn us here. He’s trying to tell us, we know we’re working on it, but we are not there. And more importantly, don’t listen to the people who say that we are.