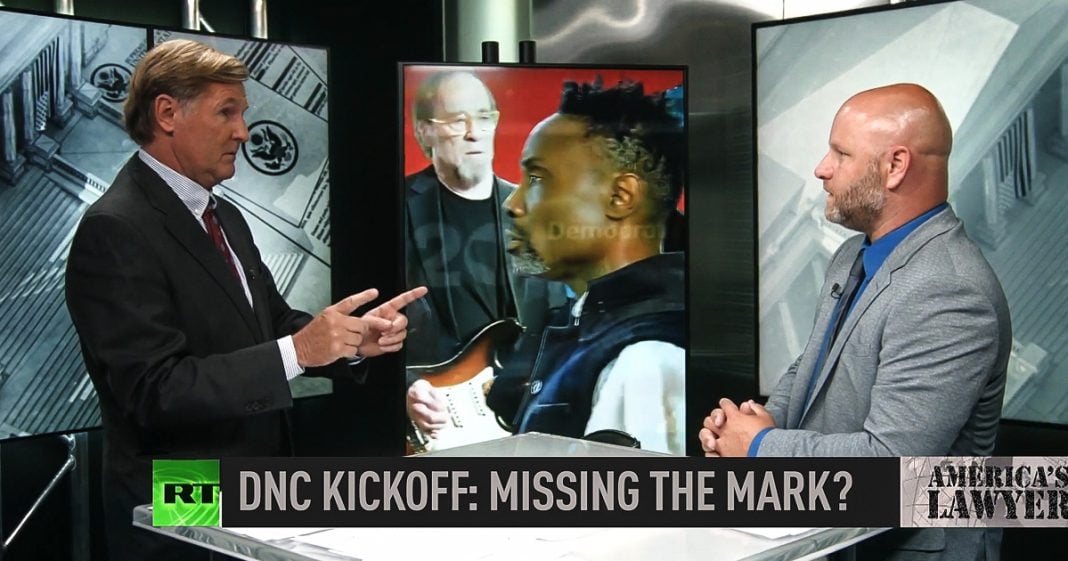 Via America’s Lawyer: The Democratic National Convention kicked off this week, and many viewers were left stunned by more than just the socially-distant virtual format. Mike Papantonio & Farron Cousins discuss. Also, a federal judge in Missouri ruled that a group of hair salons can move forward with their lawsuit against their insurance companies over business interruption claims. Mike Papantonio explains more.

Mike Papantonio: The DNC convention kicked off this week and it turns out the social distance virtual format wasn’t what viewers found most bizarre about it. Take, take a look at what came after Michelle Obama’s keynote speech.

Mike Papantonio: And everybody, the Twitter was crazy the day after. What was this? What was it about? You know, as I look at this, it’s looked like it, I think of it’s almost Comedy Central has more material to work with here. And I don’t know what the folks that put this together were thinking. I didn’t hear any policy discussion, did you?

Mike Papantonio: But what was your take on it? I mean, just look at Twitter. It’s not just me saying this. This is a broad, broad concern of people who actually sat through this.

Farron Cousins: Right. I mean, you, you, you have to come forward. You have to put something out there for people to latch onto because Joe Biden’s been, been in hiding almost since April. So we don’t know where he stands on things. We don’t know what his plans are. This was your big night, night number one, come out, give us something other than platitudes at a time when this country economically, socially, everything is falling apart and they give us this weird song out of nowhere.

Mike Papantonio: Had it not been for him, it would have been a total bust to me.

Farron Cousins: But, but was last night not a perfect metaphor for the entire democratic party and what they’ve become? Because there is no, except for Bernie Sanders, for the most part, discussion of policy. You know, what did they do last night they, or the first night? They brought out all these Republicans to say that, hey, we’re on the same side as these people, we’re going to finally play nice. They’re never going to play nice. We’re going to be good to the banks. We’re going to be good to everybody. Nothing’s gonna fundamentally change.

Mike Papantonio: Well, okay. The very fact you had Republicans on stage. What does that say about Biden? It says he’s still a centrist, right?

Mike Papantonio: Wall Street loves Harr, they love Harris. They love Biden because he goes, this is nothing different than a centrist campaign. Look, the thing that set me over the edge, I think is this love affair that the DNC has with Hollywood. They need Hollywood’s approval, they need to have these, it’s almost like these childlike thinkers focused on the idea that if we put Hollywood out there, the rest of America is with us. It’s almost like they haven’t looked at the polls to see that most of America doesn’t give a darn about what Hollywood thinks. I mean, it’s almost like, well, look, you hear this criticism all the time that you’ve got, you’ve got these Hollywood thinkers. Most of them, you know, they didn’t take substantive classes in school. They didn’t take substantive classes in college. They took how to act, which is their job.

Mike Papantonio: But, so why do we have them telling us what America should do and what America should look like? And I think, I think people’s reaction to it, all you gotta do is look at Twitter. I mean, everything I’m saying, we picked up from Twitter and social media after the first night of this, of this convention.

Farron Cousins: Well, you know, especially with this, you know, they, the Democrats still think that everybody in this country looks up to celebrities. Everybody wants to be a celebrity. These people are better than you and you love them, but that’s not the case anymore. Think back to the early days of the lockdown, when the celebrities tried to put out their little imagine video, I think it was.

Farron Cousins: At that point, everybody said, shut up, celebrities. You have nothing in common with us. You’re in a, you know, 20,000 square foot, 50 acre mansion.

Farron Cousins: I’m in a one bedroom apartment, apartment in Brooklyn.

Farron Cousins: We’re not the same.

Mike Papantonio: Matthew McConaughey was the only one out of all of them, I swear to God, if I looked at everything was named, Matthew McConaughey talked to America. He wasn’t talking to other groupies. It’s almost as if this was made for groupies. I mean, if you’re a Hollywood groupie, it’s like the DNC, I’ve heard you say this before, it’s almost as if the DNC doesn’t have any politicians to talk for them.

Mike Papantonio: That can talk policy. So they’ve got Rob Reiner and they’ve got Barbra Streisand and they’ve got these folks that are their talking, you know, they’re, they’re mouthpiece. America ain’t buying it. And, you know, you walk away, I didn’t even know what to think of Billy Porter. I mean, Stephen Stills was, you know, it’s Stephen Stills inspired me to become a guitarist myself, Stephen Stills is a great musician. I can promise you, Neil Young wasn’t there from Buffalo Springfield for reason and it’s, it was the most ridiculous thing I think I’ve, that was the, that was the end of the show.

Farron Cousins: Well, if you look at Stills’ face too, you can like, he didn’t even want to be there. He looked so miserable in that video, but they do have people in the democratic party who can talk policy.

Mike Papantonio: Of course they do.

Farron Cousins: None of them were invited. You know, when you, when you look at AOC who has, you know, love her or hate her, she is great on policy.

Farron Cousins: She can do that.

Farron Cousins: Where were they? They weren’t there. Bernie was. But they wanted Bernie.

Farron Cousins: They wanted Bernie bring in the progressive.

Mike Papantonio: Okay. And it didn’t help to have these Republicans on stage. That’s just a message and that is Biden’s just like us. He’s a centrist just like us. There’s no progressive agenda. This was, this was made, this was made for virtual groupies. If you’re a virtual group who loved Glee, you know, LA LA Land and that’s kind of, if you loved all that, you loved the convention, you love the first night of the convention. I don’t know if there’s more to come. We’ll see. Let’s stand by, stand by and take a look.

Finally tonight, some good news. A federal judge in Missouri has ruled that a group of hair salons can move forward with their lawsuit against their insurance companies over business interruption claims. Similar business interruption lawsuits are being filed all over the country by small businesses who’ve been denied claims by their insurance company. Business interruption insurance policies are designed to protect small businesses from anything that could cause a temporary interruption of their ability to conduct business, as usual, like the global pandemic that we’re experiencing right now. Great example, that’s what this lawsuit was about, but because insurance companies are being hit with hundreds of thousands of these claims, they’re doing whatever they can to avoid making the payouts that they should be making after they have a customer that’s been paying for years to have this coverage.