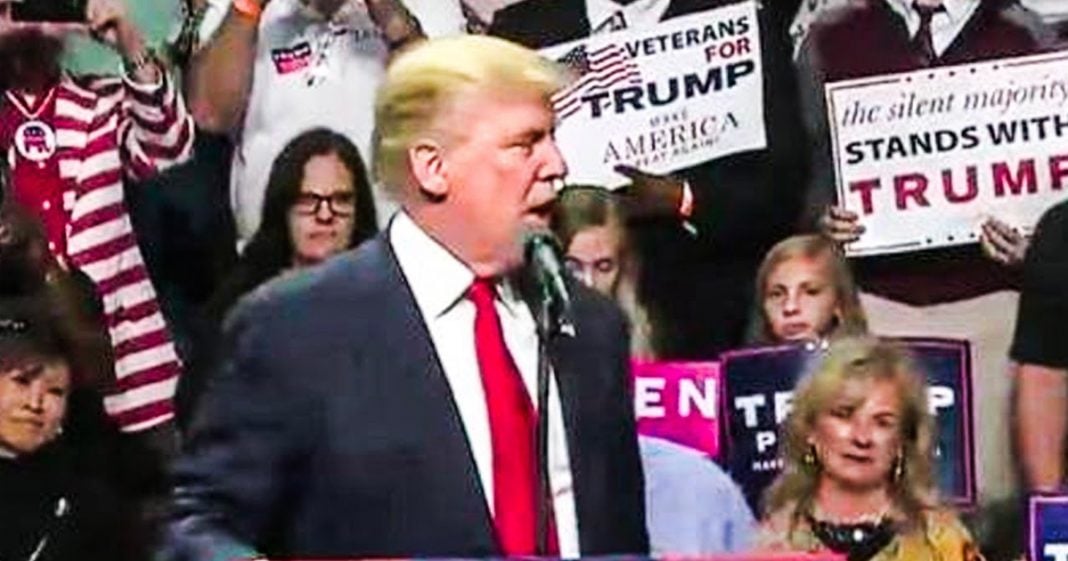 In yet another act of violence inspired by Donald Trump, one of his supporters threatened to bomb a reporter at a recent event. The exchange was caught on video. Donald Trump’s repeated attacks on the press have given his supporters the clearance that they always wanted to become increasingly belligerent and threatening to anyone who might disagree with them politically. Ring of Fire’s Farron Cousins discusses this.

Following Donald Trump’s rally on a Friday evening in New Hampshire, a Trump supporter got into a bit of an altercation with a local news reporter by the name of Alex DiPrato. And this entire exchange was caught on tape. And unfortunately the Prado later went back and deleted the exchange that the two had, but not before it was widely reported and transcribed. So even though we do not have the video anymore to show you, uh, you can find Alex DiPrato, uh, maybe tweet to him, ask why he took it down. Um, but nevertheless, this Trump supporter threatened to actually bomb the local news reporter and the local news reporter by the way, was not there to, to mock anybody or to, you know, talk bad about president Trump. He was there to cover the event because it was happening in their little local news, Uh, area.

So this is what the Trump supporter said on tape to the reporter. He said, don’t tell me to get lost. You can run, but you can’t hide. Did you guys film what happened to Rand Paul last night? How would you like that to happen to you? We’re Americans too. Our lives matter. Don’t they, even though you’re we’re white. Yeah. You can act like you got someone to text, but you’re really just a P word. Uh, how do you sleep at night when you lie? How do you sleep at night? When you are an effing liar? Are you both calling the same person? Nobody called Joe Biden. Maybe you can make him wake up from this F and nap in his, in his pudding and his pudding. Huh? Okay. You’ll pay what comes around.

It goes around. Have you, I heard about the law of reciprocity. What comes around, goes around you, MF hers are going to pay. Someone’s going to bomb. You might even be tonight. Now it’s that part right there that you’re going to pay. Somebody is going to bomb you. And it might even be tonight. That statement right there should be a one way ticket for at least the rest of the evening to the local jail. But did this man get arrested? Not that I’ve found. And this is what happens with these Trump supporters who are so in, and not only by his hate, but his attacks on the media. They feel like they are out there defending him by going up to the press and saying these horrendous things, making these threats, uh, driving a van full of explosives and other weapons to the CNN headquarters, because you’re going to try to kill everybody. Like what happened a year or two ago? That’s what the president is breeding. That is what his hatred is doing. And yet he is the one who is sitting up there, giving these speeches, telling rest of the country that it’s the Democrats who are filled with hate.

And this is what he wants. He wants his crazed supporters to go out there and commit these horrible atrocities. He wants them to do this. Some of them have others have tried. Some have only threatened it, but please folks, please remember these are not a majority. These are not a majority of the people who even voted for Donald Trump. These are the craziest of the crazies and that is who, confronted Alex DiPrato the other night in New Hampshire, just the full blown, crazy individual that doesn’t belong on the streets because they’re a danger. They are a threat to others, but of course, as he pointed out himself in his little quote, there he’s white. So nobody’s going to do anything to him. If it was a black person, hell if it was a Muslim going out there saying you’re going to be bombed possibly tonight, you’d better believe the FBI would have already pulled them off the streets for some pretty intense questioning.