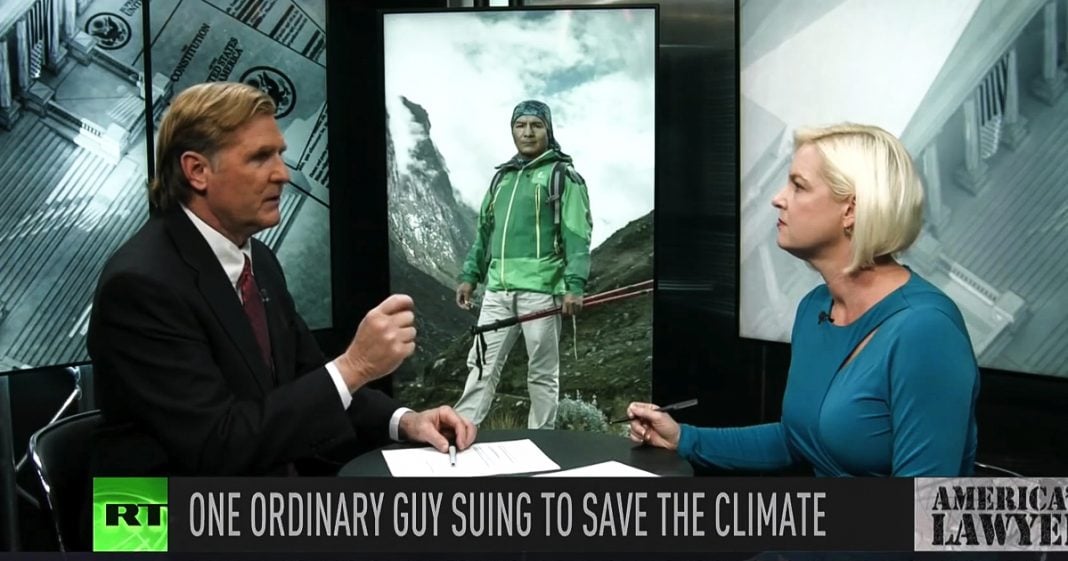 Via America’s Lawyer: Mike Papantonio and Trial Magazine Executive Editor Farron Cousins discuss big banks pulling out of private prisons in efforts to look more favorable to the public. Also, a Peruvian farmer traveled across the globe to file a lawsuit against the German energy company, RWE, over greenhouse emissions. Mollye Barrows, Legal journalist with the Trial Lawyer Magazine, joins Mike Papantonio to talk about the lawsuit.

Mike Papantonio:             Most people agree that private prisons are bad, but they don’t understand just how bad these companies really are. Let’s put it this way. When Wall Street banks think that you’re too corrupt to do business with, then something’s definitely wrong. I have Farron Cousins here with me to talk about private prisons, and you know, I don’t really see this as the banks leaving for any moral reason.

Look, these are banks that pay for fracking, they wash money for terrorists. Back in the last bubble, they kept running it out. They knew what was going to happen to the American public. It’s not that they’re pulling away from funding prisons because they believe that it’s the moral thing to, do you agree with that?

Farron Cousins:                  Oh, absolutely. What they’re doing is they’re pulling out because there’s been massive public pressure over the last two years to get them to pull their money out of these programs. Now, there has been public pressure for a lot of the things you said like, hey banks, stop funding fossil fuel companies. Stop funding fracking, but they figured private prisons was one they could actually easily pull out of and not, you know, maybe gain a few more points with the public.

So that’s what they’re doing, but now these private prisons, to make up for the fact that the banks aren’t going to be in charge of their loans and financing them, they’re going to DC and they’re doing two things with their lobbyists. One, is obviously they want more government contracts. They want more prisoners come in their way, but two, and this is a sneaky or thing, they’re lobbying for banking deregulation. So the prisons are trying to come out and say, listen banks, we’re on your side. We’re paying a couple of million dollars to have our guys fight your fight for you.

Mike Papantonio:             So it’s really trade off. Okay, first of all, the private banks, the banking industry knows if they hang in there long enough, they’re going to make a big profit. So yeah, this could be part of the show, which at the end of all of this, the banks are really not going to be that far away from funding these organizations. I think it’s interesting to note that some of the banks pulling out in saying, Gee Whiz, we can’t be part of this, are some of the bags that have defrauded consumers by making up fake checking accounts and fake savings accounts completely out of the air.

They’ve gamed the system on mortgages to where consumers were victims there. So if you look at this list, I mean wells Fargo, I mean really? Like there’s some high ground that Wells Fargo wants to take? This is purely about, and this is the way I see it, yes, they’ve gotten pushback from consumer groups or advocacy groups. Yes, they want to make it look like they want to do the right thing. Truthfully, when the numbers look like they’re attractive enough, it’s not gonna make any difference.

We saw that, as I said, with fracking. We saw it in the Wall Street burn down on mortgages. They knew for years what was coming, but they kept it up. We’ve seen it where they’re actually financing terrorism. So there’s really no morality here.

Farron Cousins:                  We’ll exactly, and the reason that banks think this is a safer group to pull out of than the fracking, or any of the others, is because they see that something’s going to happen with the private prisons. We know that there’s more assaults there. It actually costs taxpayers more to put prisoners and private prisons. So they see on the horizon there is likely going to be some kind of changes with the private prison industry because of how bad it is, and they’re getting out while it’s hot and they’re using the cover of, oh, the public wants us out, so we’re doing what the public wants.

Mike Papantonio:             Here’s what’s important. It’s a $4 billion industry, a $4 billion a year industry already. Right now, the private prisons are about 8% of the prisons. They see that climbing every year. So we’re going to see them back. This is kind of a show.

Mike Papantonio:             A Peruvian farmer traveled across the globe to file a lawsuit against the German energy company, RWE, over greenhouse emissions. He says the company should have to pay for the toll climate change is taking on his community. Legal journalist Mollye Barrows with the national Trial Lawyer Magazine has more. Why should the community have to pay for it? Shouldn’t the company who caused it pay for it?

Mike Papantonio:             Isn’t that kind of the, the question we ask all the time? About why is it that we’re letting these companies externalize all the costs and all the problems and then they’re taking all the profits and leaving us with this disaster.

Mollye Barrows:                Well, I think it’s fascinating. I think this could very well set a good precedent. One that’s needed. You have a lot of organizations like cities and counties which are suing these individual energy companies, but this is the first guy who’s brought an individual lawsuit and he’s from the Andes Mountains in Peru, surrounded by glaciers and you can see that they’re visibly starting to deteriorate.

And, and he’s basing his suit on a study that was done by an organization that found that this particular company, so he filed against RWE in Germany. He traveled all the way to Germany in 2015 to file this lawsuit. And at first it was dismissed and then it was revived three years later, basically a higher court in Germany ruled that he did have legal ground to bring this suit.

And so it is being pursued in that regard. But basically he’s saying, you know, your company, this study that was done found that your company is 0.5% responsible for the greenhouse gases that are being admitted. So I want to hold you 0.5% responsible for paying for the, the risks to prevent flooding or paying to prevent, you know, whatever it takes to shore up a town in his community.

Mike Papantonio:             You know, our Law Firm handled the tobacco litigation. We looked at each company said, you have this much of the market. This is what you should have to pay for this particular bill. We could, it’s easy to quantify. What I like about this is it’s, it’s taking place in Germany. I liked that we have a better, can you imagine that, that we’ve become, our judicial system has become so cranked.

It’s become so peculiar that we have to go to Germany to handle something as significant as this. And as I look at it, as I compare notes on what his possibilities are over there, he’s got a better possibility in Germany than he has in the United States.

Mollye Barrows:                Right, and the reason he even went to Germany, is his lawsuit’s being supported by a nonprofit called Germanwatch group. And basically he gave tours in his little town in the Andes and he met a tourist there who said, you’re right, your town is at risk. You know, they’ve had problems with flooding from a lake that was fed by glaciers before as the glaciers started to deteriorate. So they’ve see, feel like this is their real danger of this particular lake being impacted by this glacier.

So when you talked to this tourist, this tourist said, why don’t you look into this organization? So they are supporting him and his efforts to bring this because they recognize that again, you have, whether it’s this man’s community or communities all across the country, all across the world, they’re facing flooding issues from this. And if they open this door, it could help.

Mike Papantonio:             Here’s what I really like about this. The trial that takes place, if he can get that far, it won’t be a jury trial. It’ll be, it’ll really be kind of, it’ll be what we call it, a bench trial, a judge trial. This will be a list. This will be several administrative judges probably, that will decide. They’ll listen to the science, they’ll listen to the case in a different kind of way that a, that a jury would, and they’ll make decisions that will have a huge impact on any subsequent cases that are brought around the world.

It’s going to be admissible, for example, in Germany, if there’s particular findings where he says, yes, I told you I could quantify the amount of damage that was caused by this company. Here it is. We can break it down. There’s no guesswork here. It’s, it’s, it’s very specific. When he can get to that point, then we can then borrow that in the United States and say, here’s the formula.

Mollye Barrows:                And that’s what they’re hoping for. And in fact, the court has appointed two hydrology experts who are going to go to this guy’s community. Take a look at the measure of the risk essentially from the glacier. Then determine what role climate change is playing in that risk. And then again, boiling down to if it, if it’s not, if it’s not universally rooted, in, in, well that’s the argument. I’m sorry I jumped ahead.

But basically they’re going to take a look at these hydrology experts are going to take a look at a situation and evaluate if this particular company, you know, if climate change was involved, did this particular company play a role on it. And so there’s, that’s where some folks are saying the suit may not have much of a chance and that you can’t prove that a specific company is specifically responsible for this specific climate change.

Mike Papantonio:             Let me talk about that just a second. It’s always, we can’t, we can’t, don’t do it. Usually the people that are feeding that line is corporate America.

Mike Papantonio:             You can’t prove, we heard the same thing on tobacco. We’ve heard it on pharmaceutical case after pharmaceutical case. I heard it in the environmental case I tried up in, up in the Ohio River valley. You can’t prove this. No, you can prove it. There are experts that can take it down to, look, we can put, we can put a man on the moon. We can send a rocket to Mars. You don’t think experts can figure out how much damage was done by this company? What impact that had. Quantify the impact and say, you know what, the bill is $80 billion and you know what, you’re responsible for 0.5% of this. Easily done. This is not, you know, this idea, it’s just beyond us, is such a ridiculous argument.

Mike Papantonio:             Well, I don’t care if it’s twenty thousand, ten thousand, eighty billion, what’s going to come out of it hopefully if it goes right is some precedent that we can’t use directly, but we can use a lot of the information that comes out of it.