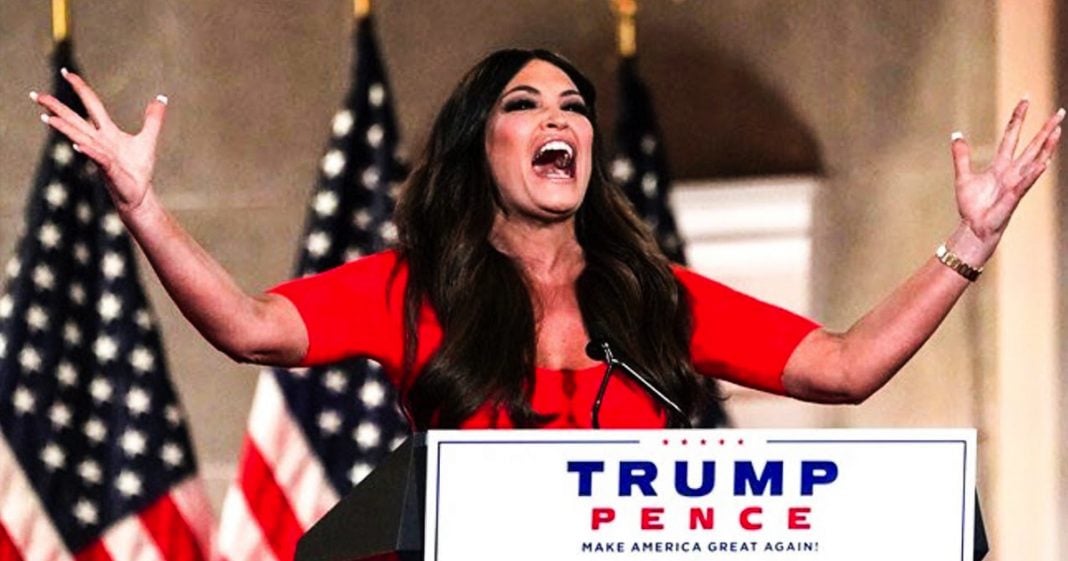 We predicted that the Republican Convention would be a freakshow, and they certainly gave us a freakshow. Between Kimberly Guilfoyle’s screaming, Don Jr.’s frantic speech pattern, and Matt Gaetz’s fear mongering, the Republican Party looked like a group of junkies who belong in rehab instead of on stage for a political party. Ring of Fire’s Farron Cousins explains what’s happening.

Well, last night was the first night of the Republican national convention. And last week we warned it was going to be a freak show. And, uh, I think it’s safe to say we were right. In fact, it was a little more than a freak show. The whole thing pretty much turned into a Coke, fueled fear Fest, uh, based on what was going on on stage. Uh, we had people like Kimberly, Guilfoyle shouting screaming at the top of her lungs to an empty room. Uh, we had Don jr with his bloodshot eyes and a late night infomercial type sales pitch of this could all be yours. And of course we had Matt Gates who came out there and said that if you vote for Joe Biden, uh, he’s going to let ms 13 essentially come and murder you. Uh, it was insane folks. It was pure, insane insanity, but let’s start with the one everybody’s obviously talking about, right? And that is Kimberly Guilfoyle, who, uh, spoke for a few seconds over six minutes, shouting almost the entire time at a room full of nobody. Here’s, here’s a clip of a ms. Guilfoyle speaking to that nonexistent crowd.

They want to destroy this country and everything that we have fought for and hold dear, they want to steal your Liberty, your freedom. They want to control what you see and think and believe so that they can control how you live. They want to enslave you to the weak dependent, liberal victim ideology to the point that you will not recognize this country or yourself.

And that was actually a Tamer part of her speech, by the way, that was not the loudest that she got during that. But that kind of gives you a good idea of where her, where her center was through most of that speech. Um, that’s kind of nuts, right? Why are you screaming? You’re talking into a microphone. You don’t need to yell. I understand, you know, sometimes the emotions take over and you yell for a second, but you yelled the whole damn thing, like start to finish there. There were no breaks in there, no pauses in there. And as somebody pointed out on Twitter, I wish I remembered who so I could give them credit. It’s even funnier given the fact that you can hear her voice echoing back to her because it’s an empty room, but that also actually goes to show that the Republican convention has no problem wasting money, because they could have had her do this speech in a, in a makeshift studio.

They could have sent her to an actual TV studio that has soundproofing on the walls, you know, rented that for 1500 bucks for an hour. But instead they had to make up this whole stage. They had to rent this room. They had to do all of this, probably spent thousands and thousands of dollars for the president’s sons, girlfriend to yell in an empty room and of the president’s son. Uh, the dude looked like he had been doing cocaine for three days straight. I’m not saying he did. I’m saying, that’s what he looked like. He got up on stage bloodshot eyes kept like tripping over his words, his eyes kinda like he didn’t quite know where he was. And of course, like I mentioned earlier, he was making that infomercial style sales pitch saying, if you get another four years of Donald Trump, this too can be yours.

All of this that you see all of this that you love. All of this that we have built can be yours for the small price of voting for Donald Trump wants more in November. It was ridiculous, but the dude looked high on something. Not sure what, not sure if maybe he just couldn’t sleep cause he was nervous. But, uh, something wasn’t quite right with Don jr there. And that leads us to the person who definitely had some things, not quite right with them. And that is my Congressman here from the first district of Florida, Matt Gaetz, Matt Gaetz got up on stage. Well, not up on stage, but he got up in front of a camera, his favorite thing in the world. And he warned people that if you vote for Biden, if Donald Trump loses you’re dead, you’re going to die. Somebody is going to kill you.

Here’s just a couple of quick quotes from Matt Gaetz, a speech. He said, we must fight to save America now. Or we may lose her forever Okada. Like when the Trump administration went full fascist and actually sent us troops into American cities to a fire upon Americans and disappear them into amark mans. I would say that was the point where we lost America forever. Uh, he had it that the woke topian as he called them are going to make Biden, quote, an extra in a movie written, produced and directed by others. It’s a horror film, really, whatever that means. Oh, actually we do know what that means. That’s that’s the claim that Republicans are trying to make that Joe Biden, somehow this like Trojan horse for the squad and Bernie Sanders, they’re gonna come in and sneaks and socialism in there, even though the DNC wouldn’t even let that happen on their own party platform.

Even though majority of people in this country, including Republicans actually want these things. And here you have idiotic Matt Gaetz saying like, Oh, he’s, he’s just an extra. It’s the real, the squads pulling the strings. They’re turning the frogs gay. I mean, he is straight up Alex Jones level right now. Crazy. He continues. It says, Democrats will disarm you empty the prisons, lock you in your home and invite ms. 13 to live next door. He does realize that Democrats have been in charge of this country before. Right? Omar, importantly, uh, people who vote, Republicans who watched and actually believe what they’re saying. You do realize Democrats have been in control of the country before. Right? In fact, not that long ago, there was a period of time when Democrats had the house, the Senate and the white house did any of this stuff come to fruition?

Did any of that happen? Did abortions become mandatory? And by the way, when Republicans were in power with the house, the Senate, the white house and the Supreme court, did abortions become illegal? No, because they use that to string you along to vote for them. And they never really have any intention of doing anything about it. Uh, so, you know, keep that in mind with all of this. Fear-mongering, they’re lying to you because they think you are stupid. That’s what they think. Um, Gaetz continues and the police aren’t coming. When you call the Democrat run cities, they’re already being defunded and disbanded. Uh, that’s straight up, not reality. We do have some cities like Minneapolis that have voted to, uh, reorganize, essentially. But that doesn’t mean that if you call nine 11, the police are not going to show up. That does not mean that if a crime is being committed, the police aren’t going to be available.

They will. This is just Republicans. Once again, thinking that you are stupid. And if you vote for them, you are you’re proving them. Right. Uh, Gaetz also said, uh, in, in Biden’s America, as opposed to Trump’s America, we’re going to have cops killed and children shot. I don’t know if Matt Gates paid attention, but, uh, we have too much of both of those things right now. Uh, especially the latter, the children being shot and that’s all happening in Trump’s America. That’s the best thing to me about all of these horrible things that they’re saying could happen under Biden. They are happening under Trump. You know, they’re saying like, look around, see all this horribleness, this is what you get with Biden. It’s like, no, you idiots. This is what happens under you. You’re gaslighting us right now. You think we’re stupid. And you want us to think that we’re crazy, but we can see through this last night did not do the Republican party.

Any favors last night did not do Donald Trump’s ticket any favors. Again, this was a Coke fueled fear Fest and not even like believable fears. I’m surprised that Matt Gaetz didn’t come out and say, listen, if you go outside a werewolf’s going to rip your head off. And then zombie is gonna use it to play soccer. That’s Joe Biden’s America. That’s just as realistic as all of these other things that Matt Gaetz said by the way. But if this is the best and brightest that the Republicans have to offer than Joe Biden can sleep easy this week, because these crazy people are not going to be getting any kind of a convention bounce. When this is all over.