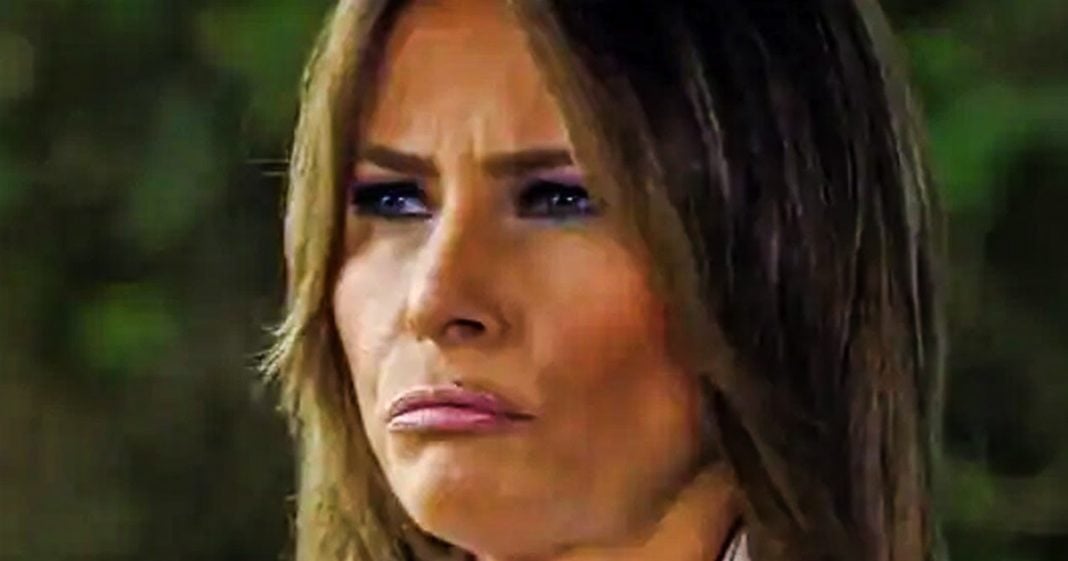 According to reporter Yashar Ali, a former friend and advisor to Melania Trump is about to release a book detailing instances of the First Lady trashing her husband, Donald Trump, and his children from other wives. These conversations are all on tape, according to author Stephanie Winston Wolkoff, and the audio of these events might need to be released in order to prove her claims. Ring of Fire’s Farron Cousins explains what’s happening.

According to one of Melania Trump’s former advisors and long time friend of well over a decade, the first lady of the United States repeatedly trashed, not just her husband, but her husband’s kids as well. And this former advisor and longtime friend, woman, by the name of Stephanie Winston,Wolkoff also has these conversations on tape and these tapes and these conversations are the basis of a new book coming out next month. Uh, the book is titled Melania in me, the rise and fall of my friendship with the first lady. So books coming out in a month got to get some publicity for it, right? So what better way to do it than by coming out and saying that you’ve got Melania on tape saying horrible things about her husband, horrible things about his kids, uh, specifically Ivanka, uh, is mentioned in here as somebody that she has made disparaging comments about, uh, many, many times.

And here’s the thing. I have no reason to doubt that this is 100% true, but we also need to understand that this is coming out right now because you got to build up some hype for the book. So that’s why this is being released. Unfortunately, though, and this is how the slow trickle always works. And this pisses people off, we don’t know what any of these comments are right now. I’m willing to bet though, within the next week or two probably, uh, we’ll get, start getting statements like, Oh, well she said this about her. She said this about Don jr. She said this about her husband, you know, slow little trinkets of information that are going to come out before the book is released. Then the book’s gonna release. They will instantly become a bestseller. Cause everybody wants to know what other things Melania said about this family that she married into.

So here’s what I actually want to say about this specific topic. This is disgusting. Not that they’re releasing this information. I have no problem with that. But Milania Trump herself, absolutely a horrendous ghoulish individual with, with absolutely no soul. I understand your marriage has not been great. And I have no problem with you making these horrendous comments about your husband. However, you, you married into this family and he has children. And even as ghoulish as those children are your, their stepmother, you don’t get to do that. And I know they’re grown. It’s not like you’re saying this about children. However, they are yours. Yeah. You don’t get to do that. If you had a problem with them, if you did not like these kids, you should not have married their dad. They’re a part of your life now. And that to me is what’s so disgusting about this story. Not that you, Oh, she’s, you know, such a horrible person. We knew she was bad. The problem is you can’t trash. Your step kids. You can’t. If you’re having a problem with them, you address that with them. You don’t go out there and tell your friends how horrible these people are. That is absolutely despicable. The public understands how bad these kids are. And if you have a problem with them, you divorce the man.

And then you can go out there and speak your peace. But while they are still technically your step kids, if you have a problem with them, you address it with them. They’re grown ups. You’re supposed to be to Melania. That to me is what’s really disgusting about this story. She doesn’t care. She doesn’t care about anyone but herself much like her husband and much like her step-kids as well. She fits in perfectly. And I think that’s what terrifies her the most is realizing how horrible these people are and that she herself is no different. That’s what scares her. That’s what makes her so sick about the way they all behave. Cause she acts the exact same way.