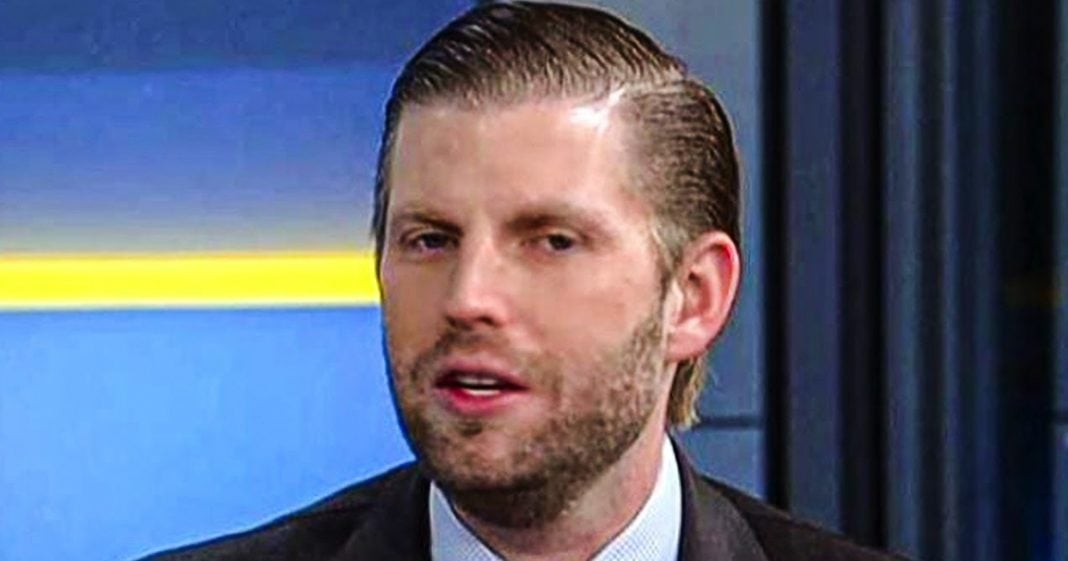 It was confirmed on Monday that the District Attorney in Manhattan was seeking information related to a bank fraud investigation against the Trump Organization. This is the first time that this information has been confirmed, and it could spell doom for the Trump family. But it might be Eric Trump who should be sweating the most right now, as his name was specifically mentioned in the court filing and investigators are prepared to pounce on him as soon as possible. Ring of Fire’s Farron Cousins explains what’s happening.

In accord filing on Monday morning, it was revealed the New York attorney general Letitia James is in fact investigating the Trump organization and Donald Trump and even his kids for potential bank fraud, amongst other things, specifically, the allegations made by Michael Cohen in his February, 2019 hearing in front of the house of representatives where Cohen said that Donald Trump would inflate his assets when applying for bank loans and then deflate them when paying his taxes on them. That’s bank fraud, that’s tax fraud, that’s wire fraud. That’s pretty much any kind of fraud you could imagine having to do with money. Now. That’s what Michael Cohen suggested it happened. And that is what Letitia James, the attorney general in New York, along with Cy Vance, the da in Manhattan are both looking into the court. Filing yesterday, specifically asked the court to enforce a subpoena to force the immediate release of the bank records from May’s RS over to the investigators in New York, as well as not just get the bank records.

They also said, by the way, while you’re at it, can you go ahead and compel Eric Trump to come, come on and testify with us. We need to have a word with him. See, here’s what happened. Here’s the backstory on that little bit, uh, Eric Trump was supposed to go and talk to the investigators in July. And then right before that was supposed to happen, he abruptly canceled it. And as lawyers issued the very cryptic statements saying, quote, we cannot allow the requested interview to go forward pursuant to those rights afforded to every individual under the constitution. What does the constitution say about talking to investigators? Oh, Oh, that’s right. You have a right to not incriminate yourself. They’re essentially invoking the fifth amendment without actually having to invoke the fifth amendment because they know the dumb ass. Eric is going to go in front of these investigators and admit to something that he ought not be admitting to.

The problem is the documents that they already do have, they’re able to show inflation of assets in order to secure bank loans. They know they have evidence here. Uh, one of them is a, uh, for this luxury home, uh, property that he owned, he inflated the value, uh, to 261 million, but it was only worth 20 million. So he inflated it by more than 10 times. I already know that that’s something they have. Uh, there’s also an issue. A similar thing happened with the Trump hotel in Chicago go. So they’ve got a lot of evidence ready. They want even more evidence. Cause if you go in there and saying, Hey, he did it one time or he only did it twice. Okay, well maybe the punishments a little less severe, but if you go in there, there, and you establish a pattern of criminal fraud and you get little Eric on record admitting to it somehow, which I’m sure these investigators could do.

And based on the lawyers that we’ve seen, the Trump team hire, I don’t have a whole lot of confidence in the people that Eric Bert would bring in that room with him. So I think these very skilled, very talented investigators, the da, uh, Letitia James I think they could absolutely the crack Eric under the pressure and his lawyers, if he’s anything like the rest of his family with hiring lawyers, aren’t going to be competent enough to be able to stop that from happening, or if Eric’s too much, like daddy’s, it doesn’t matter how competent his lawyers are. Cause he’s going to do whatever he wants. Anyway, this doesn’t end well for the Trump family. It 100% does not, especially considering the fact that they have already lost so many court cases about this specific issue, including one at the Supreme court. They don’t really have a whole lot of money or, uh, options here. And I hope that the judge in this case understands that they have gone through the legal loopholes. They have gone through the hurdles. They have gone through the front, the back, the side to side everywhere it has been looked at. Trump has lost. So go ahead and enforce those subpoenas and let’s get this dang thing over with.