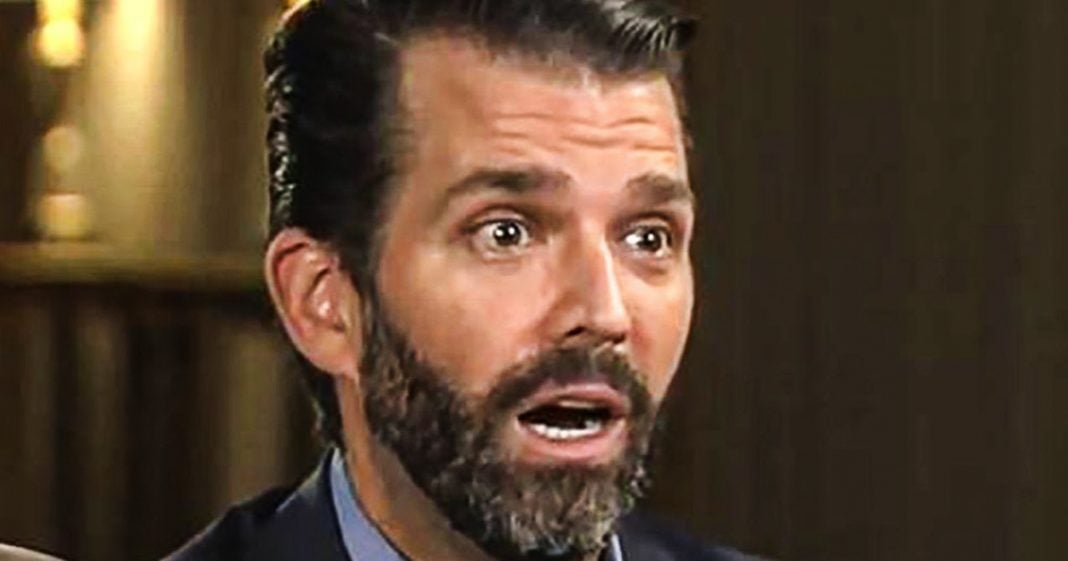 The only reason that Donald Trump was not prosecuted for obstruction of justice by Robert Mueller is because Mueller relied on the outdated code that the DOJ wouldn’t prosecute a sitting president. But what happens when Trump isn’t president anymore? That’s the kind of question that is giving Donald Trump, Junior cause for concern, as a new profile on the President’s son reveals that he fears his family will be prosecuted if dad loses the election. Ring of Fire’s Farron Cousins explains what’s happening.

Donald Trump jr. May have, uh, been the star of last night’s Republican convention, but behind the scenes, he’s a little less confident and a little less cocky than what he portrayed on our TV’s last night, according to a new profile of Donald Trump jr. In the New York times by reporter Jason Zengerle, uh, Donnie jr. Believes that if his daddy loses the 20, 20 presidential election, uh, then his dad and probably himself, and maybe even his brother and sister are likely going to jail. That is the big takeaway from this profile on Donald Trump, jr. Sure. The profile talks about the fact that juniors are rising star with the manga world and it always refers to it as the manga world, not the Republican party, just the magazine section of it. You know, the hardcore, you know, you know, the ones, the ones who like to chant build the wall because they don’t want any people that don’t look like them and the country, uh, you know, you know what they are, the people who might actually have some white hoods hanging in their closet.

Those are the ones that really seem to just love and gravitate towards the Trump family. And jr is the heir apparent according to this article, but yeah, it all hinges on whether or not daddy can win in 2020, because if he doesn’t, as jr believes they could all be heading to prison. And here’s why he thinks that, um, if you’ll recall Robert Mueller, special prosecutor, uh, he said that the reason he didn’t prosecute Donald Trump for all the obstruction of justice and possibly some other things was because, you know, the DOJ kind of has this long standing. He called it a rule. It’s not actually a rule. I don’t know why people say that it’s not a rule. No, it’s a memo to suggestion during the Richard Nixon era. So whatever, whatever, I mean, that’s, that’s frustrating enough, but either way he said, Hey yeah, you know, they’ve got this rule that you can’t prosecute a sitting president.

So that’s, you know, my hands were tied. Your hands are not tied house of representatives, just so you know. So, but they decided not to do it. They waited until he asked you crane for dirt on Biden. And then they said, Oh, now we got to impeach him for that. Mmm. What happens when Trump’s not president anymore? He’s not protected by that. So-called rule from the DOJ. And that’s what little Donnie jr is worried about. They’re worried that the Biden administration is going to be so irate with them, that they’re going to come forward and they’re gonna prosecute. And they have all the evidence. Like they don’t even have to do much. They can straight up and be like, cool. Uh, go file this in court. Cause we’re ready. Um, and Biden could end to be honest with them, all of the trash talk that this administration has done against the Obama administration and Joe Biden, all the lies, the smears, the craziness, do it just to shut them the hell up.

And I know that sounds petty, but technically these dudes committed crimes times like you’re welcome within your authority to tell the DOJ, Hey, uh, this file here. Can you go prosecute this? Great, thanks. See you later just do it because that’s how law and order works. But apparently, and I firmly believe this. There has gotta be some kind of like unspoken code or maybe even it is spoken code between presidents that they’re like, Hey, I’m not going to look into you. Okay. I’m not going to investigate you. Cause you know, you didn’t investigate the guy before you and the guy before you didn’t investigate because otherwise why would Obama just let the Bush people off? Why would Biden want to come in and let Trump off? Why would Trump, if he actually thought that Obama spied on him, not actually actively go after that until right at the election when it was politically correct?

No, they’re there. There’s something bigger at play here, I think. And maybe that’s, you know, me being a conspiracy theorist, but I think there’s a reason why presidents don’t investigate one another. And I think it’s stupid. As somebody broke the law, they broke the damn law, investigate them, prosecute them. It’s okay. That’s actually why we have these things. But if I were Downey jr, I wouldn’t worry so much about the Mueller stuff. You’re probably okay with that. Other than, you know, the whole email thing that you just tweeted out, as the reporter said, I think you need to be more concerned about what’s happening up in New York. To me, that’s the bigger fish, because that one doesn’t even matter. If daddy wins reelection or not, you’re going down. They’ve got a lot of evidence already. And they’re about to get a heck of a lot more when they get the rest of your financial records. So maybe focus more on that and not worry about this Mueller prosecution. Cause Biden’s already said, he’s not going to push it. If it happens, it happens, but he’s not gonna push it. However, up in New York They’re pushing it and they’re pretty close to having their case ready to go to court.