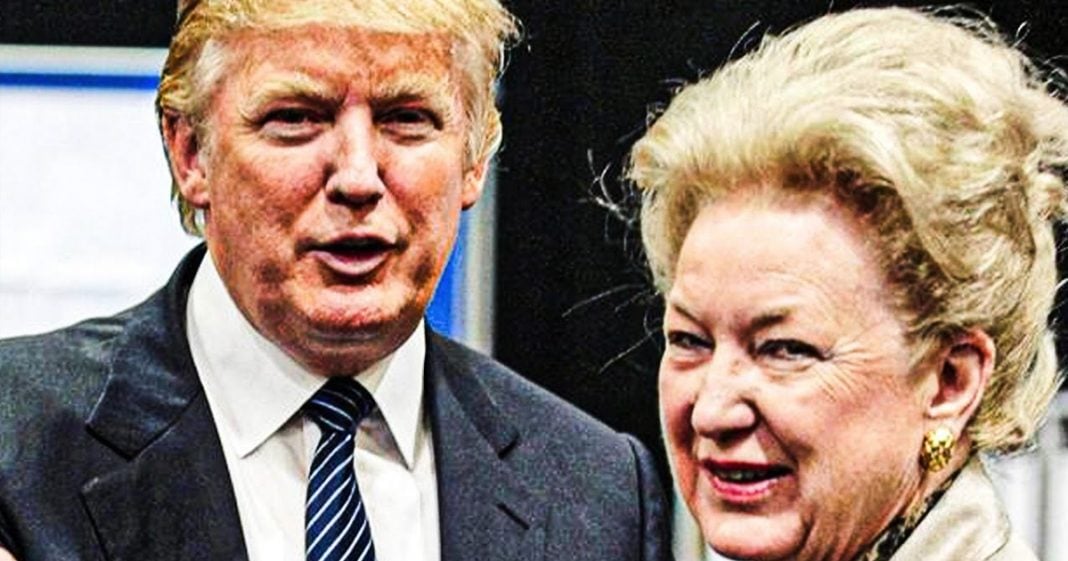 Donald Trump’s sister Maryanne Trump spoke her mind to her niece Mary Trump for the past two years, and Mary had enough sense to record those conversations. The results are in her new book, but when pressed about the authenticity of the statements she quoted, she was able to provide transcripts to The Washington Post. The transcripts reveal that Trump’s own family believes he is an incompetent and cruel human being, and that’s among the nicer things said about him. Ring of Fire’s Farron Cousins discusses this.

Donald Trump’s sister Maryanne Trump Barry, uh, has had some unkind things to say about her brother, uh, over the last few years, since he became president of the United States. And up to this point, it was all considered to be just hearsay. You know, uh, Marianne Trump had said these things to her niece. Uh, other people may have heard it over the, you know, may, as he said, she said kind of stuff. But, uh, actually over the weekend it was revealed that there are tapes. There are audio recordings that Mary Trump, Donald Trump’s niece, uh, secretly recorded of conversations that she had with her aunt Maryanne, uh, in preparation for her book that was just recently released. These are conversations that took place in 2018 and 2019. The transcripts are available. Uh, news outlets actually have the audio. This is real. And here’s the thing. Here’s what we learned over the weekend from these tapes and the transcripts and all of the stories coming out about them.

We learned that Donald Trump’s sister thinks he’s an idiot. We learned that according to his sister, the man doesn’t read, uh, we also have the audio, obviously of her saying that she believes somebody else took the sat for him. Um, she thinks that he is incompetent. She thinks that he is just playing to his base with all of this immigration stuff. And most importantly, she believes, again, this is all on the audio, uh, that the man is just plain cruel. Uh, in fact, she said, you know, it’s the phoniness of it all. It’s the phoniness. And this cruelty Donald is cruel.

She said, so Verbatim quote there from his sister, the woman who has known him since the day that he was born. And she spoke this candidly with her own niece about who her brother really is now, Donald Trump, after these stories broke, he fired back. And you know, he said, well, I just, I miss my brother, his brother that died. Uh, last week I miss my brother. If she didn’t even come to the funeral, I miss my brother. I just, I can’t think about this. Uh, uh, which actually to be honest, that that was not a bad response from Donald. The I’m surprised he did not go after her, uh, with more vigor. You know, the fact that he was actually a little somber about it, maybe he does actually miss his brother. Maybe that’s a, you know, ounce of, of humanity that the man may have had in him.

Um, but nevertheless, we cannot overlook the things that, uh, his sister says and we won’t right. We know these things. I’m not saying this right now. I think probably to anybody who doesn’t already think the same thing, the question is how much more of this is going to take for these Trump supporters to wake up. I don’t even care if you stopped supporting the guy I’d love for you to, but at least if you would be like, you know what, I support him for president, but I’m also willing to admit he’s an asshole. He’s a cruel person, not a shred of humanity in him, but I like that. If you like that, great. I mean, it says a lot about what a horrible person you are, but at least be honest about who this man is, his own. Family’s being honest about it. I would think that the cult like members of the mega crowd should at least be able to admit the same thing. The dude is not perfect. The dude’s not even good, not even at being a basic human 10 being. And if you’re unwilling to admit that after his own family has warned us, then yeah, you’re not unappealing political party anymore. You’re in a cult.