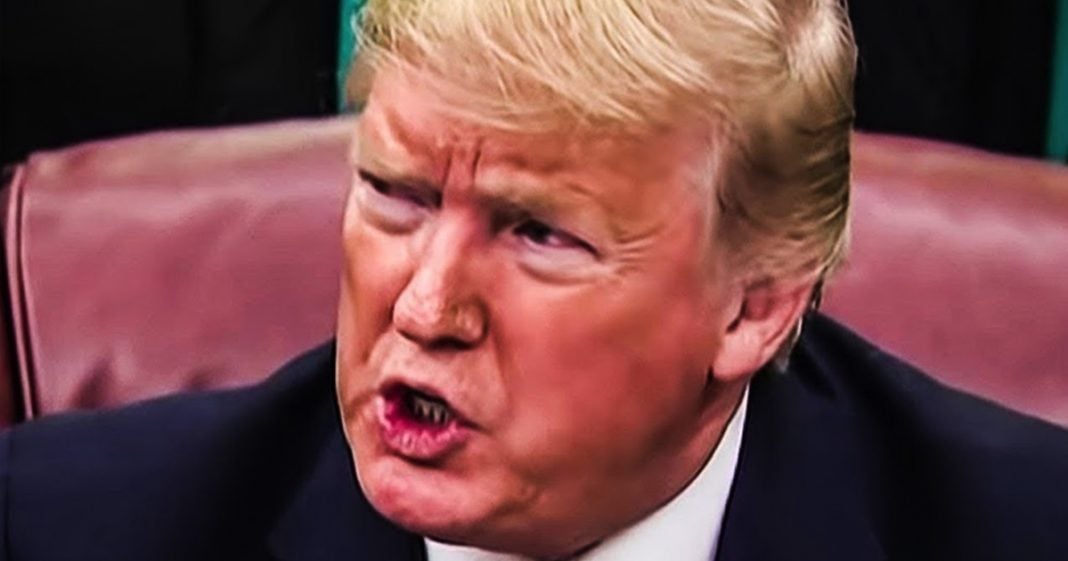 A federal judge has put the brakes on a lawsuit from the Trump administration and the Republican Party that sought to end Pennsylvania’s vote-by-mail program. The judge had told the Republicans that they had to turn over evidence of voter fraud if they wanted their case to continue, but they were unable to do so, blowing a major hole in their chances of suppressing the vote in November. Ring of Fire’s Farron Cousins explains what’s happening.

A Trump appointed judge in Pennsylvania on Sunday, put the brakes on a lawsuit, brought by the Trump administration and the Republican party seeking to stop Pennsylvania’s vote by mail program, which was greatly expanded recently so that people could vote without having to live in fear of catching coronavirus. Um, the Trump administration and the Republican party didn’t want this to happen because as Trump has admitted, when you have more people voting that spells doom for the Republican party, they don’t want people to vote from home. They don’t want people to vote safely, so they’re not going to let it happen. Uh, so here’s the thing yesterday, the judge came out on a Sunday, it said, I’m going to haul this lawsuit that you all have going right now. And by the way, they had actually been told that they had until this past Friday to turn over all of the evidence that they had regarding voter fraud in Pennsylvania, because that’s why they filed the lawsuit because they said there’s too much fraud in Pennsylvania.

You can’t do this. You’re going to ruin our elections with all the fraud you’ve gotten. So the judge had said, okay, um, can you, can you show us this? You you’ve said, actually, in, in the filings that you have evidence, so you have until Friday to turn over all this evidence that you swear exists, but you haven’t shown anybody. Uh, and then we’ll go from there and we’ll see what happens. Uh, obviously they didn’t have the evidence, right? And so then on Sunday, the judge has to be like, eh, you know what? There are so many cases like lawsuits happening in the lower courts in the state courts. So I’m going to just abstain. We’re going to abstain this entire lawsuit. I’m putting a stay on it. So the little lower court ones, the state courts, so that those can work themselves out. Again. This was a Trump appointed judge, a judge by the name of Nicholas Rajan of the us district court in Western district of Pennsylvania.

And the reason judge Nick, uh, went ahead and issued the ruling this way is because he didn’t want to offend Donald Trump, but we’d know the truth of what actually happened here. You’re not saying I’m putting the brakes on this because we’ve got state courts that are going to determine this. No, no you’re doing it. Cause you know, they don’t have a case, but if you throw it out, you’re going to become a villain to the Republican party. And that’s going to ruin your chances of ever getting appointed to an even higher court in the future. Right. That that’s what you’re worried about. That cause that’s what would happen. And that’s why you issued the ruling in this way. You know the truth, you know that they’d, couldn’t turn over that evidence because the evidence doesn’t exist. They were given to a Friday, they blew the deadline.

They don’t have the evidence. And so you’re just sitting there scratching your head on a Sunday, thinking my God, what am I going to die? Am I going to get out of this? And you came up with the best plan. You said, Hey. Yeah. Uh, you know, you got some state lawsuits happening. Uh, when we just look at those, you know, maybe, maybe they’ll come up with something better and losers would just stay this lawsuit now. So that way, if evidence comes up in one of those lawsuits, I guess we could use it in this one. And if not, then we’ll just be like, Oh, we forgot about this lawsuit. It’s going to go away forever. This is ridiculous folks. This is absolutely ridiculous. Um, there is no widespread voter fraud. Trump has been trying to find it for years and every time he has looked for it, he has failed.

No matter how many loyal Stooges he puts in charge of concocting, voter fraud, they can’t find it. And they’ve been looking. And the few instance it says, we do have a voter fraud being committed in person, voter fraud, being committed. Guess what? Every one of them is a Republican. So that’s probably why they don’t want to turn over the evidence either. Cause there’s only a handful of them and all of them are Republicans. So not exactly making your case there, but Hey, at least you got judges like this who are willing to soften the blow a little bit. So you don’t feel like such miserable failures.