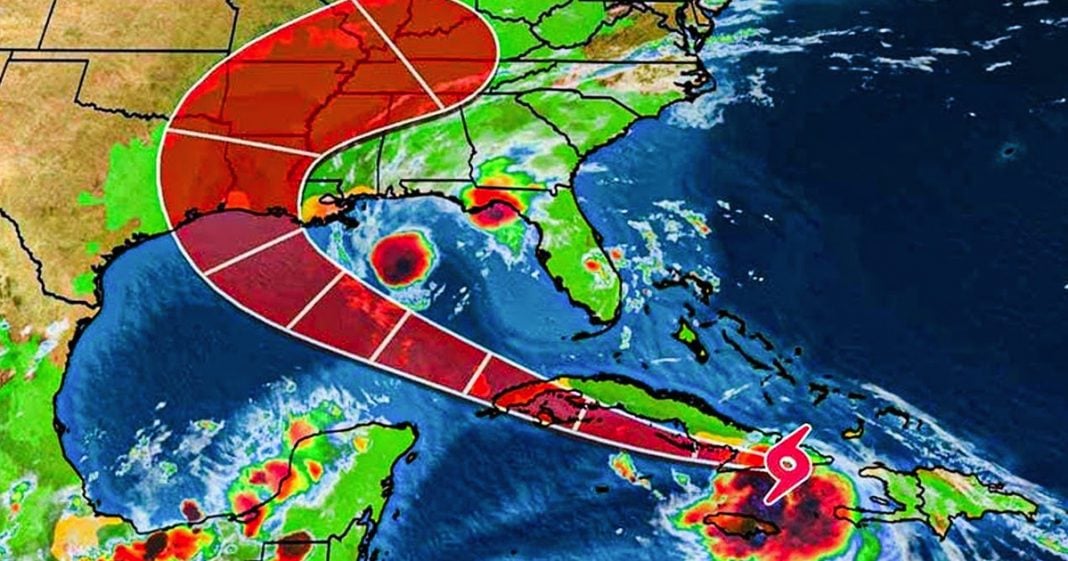 The state of California is witnessing major wildfires after more than 10,000 bolts of lightening hit the northern part of the state recently. Meanwhile, the Gulf Coast is preparing for an unprecedented double hurricane strike, likely hitting Louisiana. These disasters are made possible by climate change, and the pandemic is making it harder to prepare and/or fight the problems, too. Ring of Fire’s Farron Cousins explains what’s happening.

Uh, there are several natural disasters taking place across the country right now. Uh, actually more to come over the next couple of days, as well as, uh, the state of Louisiana and most of the Gulf coast braces for the second hurricane impact of this week, uh, the state of California, uh, starting last week had more than 12,000 lightning strikes that resulted in dozens and dozens of massive wildfires in the state burning areas of California that had not caught fire it over 70 years. Um, those fires by the way, still raging right now. And they’re actually having a harder time fighting those fires because typically, uh, during this burning season, which is what they have in California right now, um, they bring out federal prisoners to help fight the fires. They pay them like $2 a day. I think it is. Uh, but they can’t exactly do that now because we’re in the middle of a pandemic.

And even though we rely on these prisoners to come save our lives and act as firefighters, even though they’re not trained to do it, they still do it. Mmm. You haven’t been taking care of them in prisons. So, you know, prisons across the country, I’ve seen massive outbreaks of COVID-19. And so we can’t have the prisoners come out and infect more people by fighting the fires. So we’re kind of between a rock and a hard place of our own design, by the way. And then as I mentioned down here along the Gulf coast, the state of Louisiana is currently a right, Oh, as of this moment getting hit with storm Marco. And as soon as Marco finishes going through the state, it is most likely going to be hit by hurricane Laura. Uh, this is a remarkable time, uh, first time in, uh, I think recorded not necessarily recorded history, but, uh, at least certainly within the last hundred years or so that we have had two storm systems in the Gulf of Mexico at the same time that are going to hit the exact same spot, wheezy Ana, um, more so probably than most of the other areas along the Gulf coast is more prone to severe damage from hurricanes.

Uh, because most of the areas down there along the Gulf coast are in fact below sea level. So anytime you get a storm surge and you get the, uh, big, you know, eight to 10 foot waves on top of the storm surge, you’re talking about 15 to 20 additional feet of water going over, uh, coastal Louisiana, not to mention the levies, just like with Katrina, if those things do not hold, we could be looking at an absolute catastrophe that could potentially wipe cities in Louisiana, actually off the map, quite literally wipe them off. We have already seen areas of Southern Louisiana in the Gulf of Mexico disappearing, thanks to climate change. And by the way, according to the scientists, climate change is what’s allowing these storms to do what they’re doing to the Gulf coast right down to the folks of Louisiana, the Gulf of Mexico, the surface temperatures hotter than usual, and that warm water feeds these systems. And here’s the real danger here too, because Marco is coming through right now, whenever a storm comes through like that, it changes,

Uh, the seabed Changes the way it goes, changes the way it lies, changes the currents that come through there as a result of that. So when you have a second storm come through, right after that, essentially creating a clean slate from the first one, you’ve lost sandbars, you’ve lost barrier islands. You’ve lost things that are actually nature’s way of protecting areas from storms. You’re still probably dealing with a storm surge that hasn’t completely subsided. So whatever storm surge, the second storm brings folks, this is going to be horrid. This is absolutely going to be horrid. And I hope everyone is paying attention, not just to Louisiana and the Gulf coast, but also to California. We do not have competent leadership right now. We do not have competent responses for any of these disasters, partially because of the pandemic. The other half is because we’ve defunded, the damn federal government, people are going to need our help. They need our help right now. And anyone who was able, anyone who has something to give, whether it’s blood, whether it’s, you know, a close you’re going to take the Goodwill, whether it’s financial support, maybe you’ve got some cases of bottles of water that you had stocked up for the pandemic, whatever you can do. There’s going to be a lot of needy people, uh, in a matter of hours, Help them out as best you can.