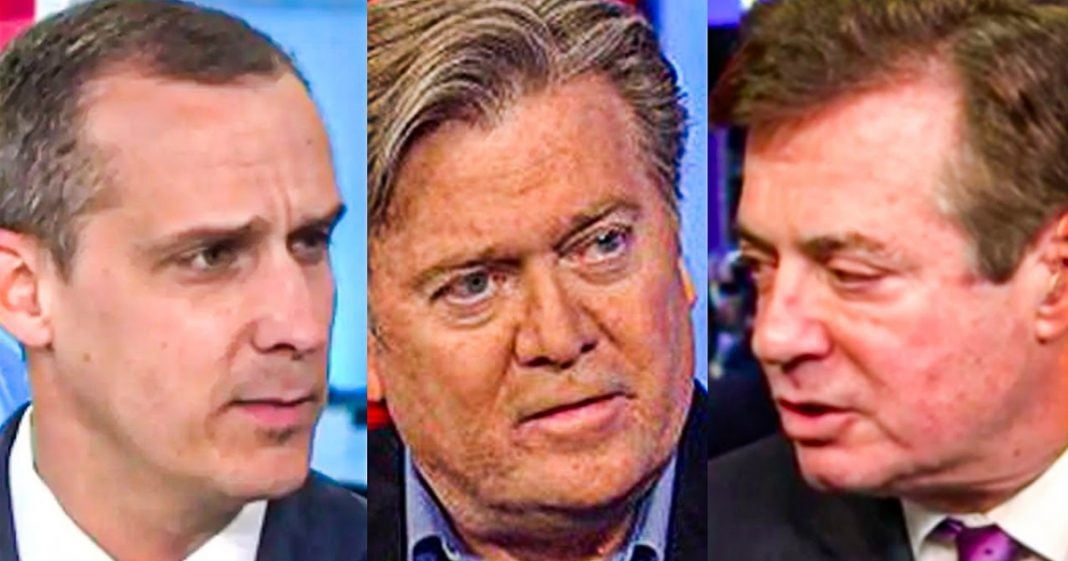 The arrest of Steve Bannon this week makes him the third person who had, at one point, run Trump’s 2016 campaign to face criminal charges. He becomes the umpteenth person from the 2016 campaign to face criminal charges, and the big takeaway is that the entire campaign was essentially a criminal enterprise due to the fact that it was run by people who break the law. This isn’t a coincidence, as Ring of Fire’s Farron Cousins explains.

Only the best people. That was the promise. That was the pledge that Donald Trump may do the American public when he was elected president by the electoral college, only the best people. That is what he was going to staff his administration with. That’s what he ran his campaign with. It was only the best people, seven, seven people. Now with Steve Bannon’s arrest earlier this week, seven people who worked on Donald Trump’s 2016 presidential campaign have now been arrested. Three of those seven Corey Lewandowski, uh, Steve Bannon and Paul Manafort were people who at one point were actually running the entire campaign.

So Any given point that 2016 presidential campaign was being run by somebody who later on ended up being arrested Lewandowski for misdemeanor fraud, uh, Manafort, uh, was a tax fraud, lying to investigators. And then of course, Bannon the, we build the wall fraud. Uh, this week three people that ran his campaign at different times, all ended up going to jail briefly in Lewandowski his case. He was, you know, arrested for it. Briefly charges were eventually dropped for him. Uh, it’s not going to happen with the other guys, but then there’s other people too, as I mentioned, there’s a total of seven. At least you had Rick Gates, Roger Stone, Michael Flynn, and Michael Cohen. These are all people who were involved in some way or another with Donald Trump’s 2016 presidential campaign. Some of them more involved than others, obviously

They’ve all been arrested. Some of them were already convicted. Some of them were already serving jail times. This is crazy. I could you imagine? I mean, okay. No, no, no, no. Not even. Could you imagine, I’m not even going to do that. Think about this for a second. Donald Trump, even in multiple different interviews this past week said that Obama is a criminal said that his whole administration was criminal. It was run by criminals. He was associating with criminals folks. That’s pure projection. I don’t care if you like Obama or you hate Obama. That’s fricking projection because we have the arrest records of the people who actually worked for Donald Trump. They’ve actually been arrested. Obama’s people haven’t and they’ve been investigated to hell and back by Republicans. And they couldn’t find a single thing to pop them on Trump’s people. On the other hand, um, they’re, you know, well versed with the procedure of the policies.

They could probably read you their own Miranda rights because these people by definition are criminals. It almost makes you feel like Donald Trump’s entire presidential was a criminal enterprise. So the question is, why is Donald Trump just that unlucky that everybody he likes ends up going to jail or is he seeking out a specific kind of personality, a specific kind of human to associate with, because that’s what it really feels like right now. And that’s what I do think is happening. People seek out other people who are like them. That’s just a basic psychological truth. And I think 100% that that is what Donald Trump has done, you know, based on the investigations that are happening in New York, along with the, uh, admissions from Michael Cohen, I think it’s pretty obvious at this point that there’s some pretty serious, uh, spooky skeletons in Trump’s closet, that likely amount to criminal activity. And if that is true, then it would come as no surprise that he would staff his campaign with criminals as well. If that’s what you do typically, it’s what you associate with. And I think that is exactly what we’re looking at with Donald Trump.