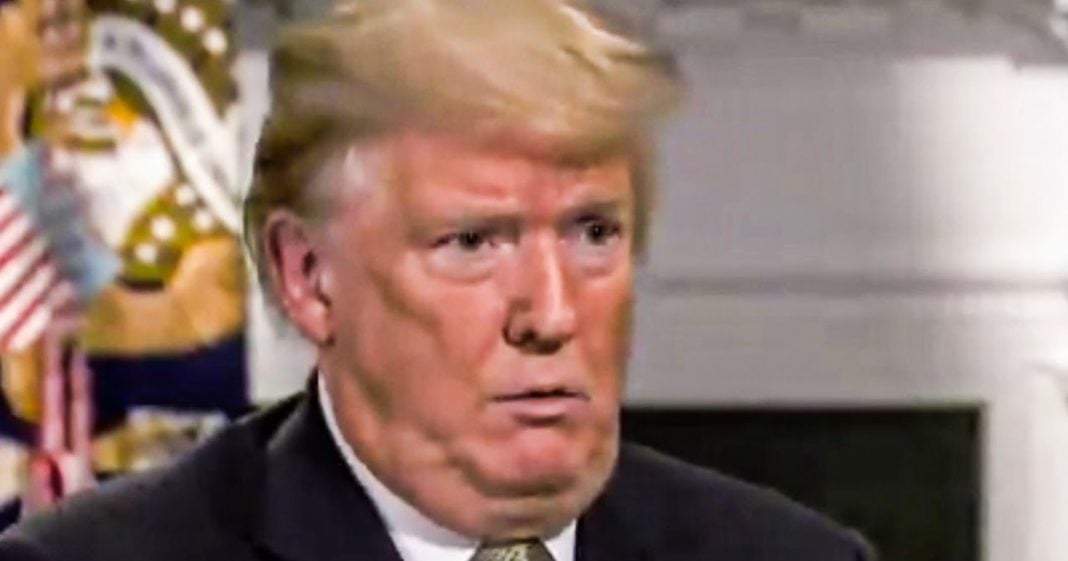 During a speech in Arizona this week, Donald Trump admitted that he is no longer “talking to China” and that he just doesn’t want to talk to them right now. What this means is that the country isn’t giving into his demands, and he’s never been willing to budge, so the trade war will continue to drag on needlessly and endlessly. Ring of Fire’s Farron Cousins explains what this will do to the economy.

Holy hell folks. Like I don’t think enough people appreciate the fact that for three years, we have been involved in this trade war that was started because the president is complete idiot and he doesn’t know what the hell he’s doing. He doesn’t know what the hell he’s talking about. And now in the middle of an economic recession, he is sitting here saying, I don’t want to talk to him. I’m not doing it. I’m not going to talk to him anymore. I canceled it. I don’t care. We’re spending billions of dollars every year to bail out American farmers who are still going bankrupt at an alarming rate because of this trade war. China has not even as part of their foods. One started rebuying American goods. So nothing’s changed. The only thing that’s changed with phase one is that they’re trying to crack down on intellectual property theft.

Uh, so I mean, I guess that’s a positive, but really wasn’t, you know, a, um, something that was affecting our daily lives through us, the trade war is, and Trump just said, screw it. I’m done. I don’t, I don’t care. I’m mad at China. If anybody has a right to be mad, it actually is China right now. And I’m not saying I’m taking their side on this thing. But, uh, with the racist attacks that the president has lobbed against them trying to call it the China virus and the, you know, blaming them for everything, accusing them of things that, you know, he has no evidence to back up. Yeah. I’d say they have a right to, to be the ones to say, I canceled the talks, but it’s Trump. He treats him like crap. And then has the audacity to say, I don’t want to talk to you anymore.

Fair enough. But here’s the thing. This is not a country that can be bullied into doing what you want them to do. This. Isn’t a business deal where you’re trying to gobble up a much smaller competitor. And so you can push them around. You can bully them around and you can try to give them the short end of the stick. China’s a very strong superpower, just like us. We’re essentially on an even playing field here. And you have to treat them as such. We may not have to agree with everything that China does. And I don’t think anybody in the United States does. I would hope they don’t. Um, but at the same time, we can’t go at them with this kind of attitude that you’re going to give us everything we want. We’re going to walk away the big winners of this. And you’re going to walk away with your tail between your legs. And I might give you a couple of crumbs. It may have worked when you were in the business world. It doesn’t work with a global superpower. China’s not going to be bullied into a deal. They’re not going to be brow beaten

And submission. They have, They don’t that they don’t care what happens to their own people. So if it means screwing them over to prolong this trade war, China’s cool would do in that too. You know, the leadership there, it’s unfortunate for the people in that country. And we need to be a little bit more conscious of that. China’s not the only bad guy in this situation, not by a long shot. We screw over other countries just as well, making a deal. Shouldn’t be this difficult. But when you have a, a raging narcissist trying to make the deal, then yeah. Suddenly it becomes a little bit harder than it should be.