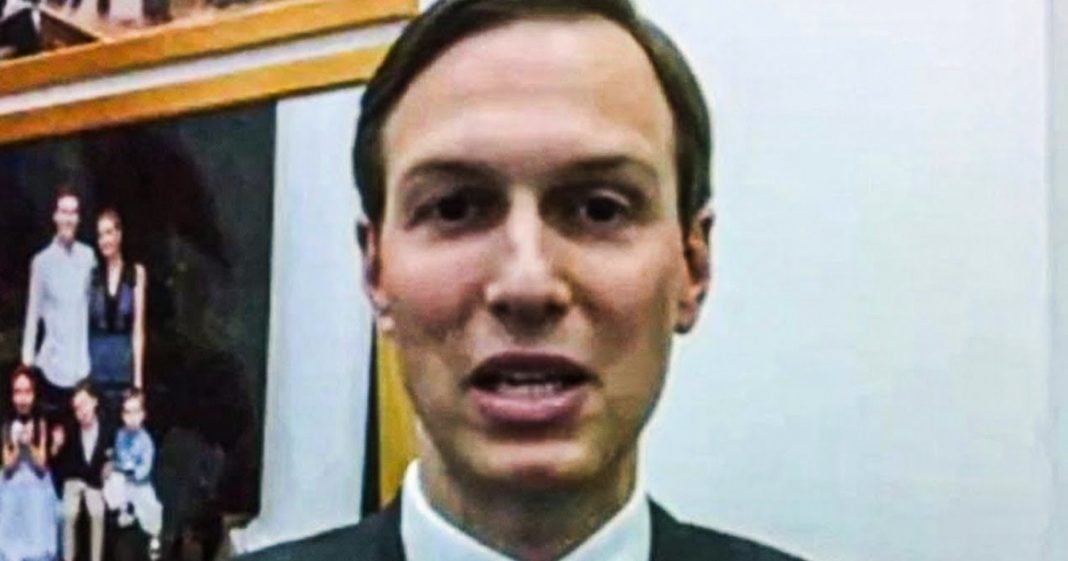 During an interview with Wolf Blitzer this week, Jared Kushner was asked pointedly whether he considers 170,000 Americans dying from COVID 19 to be a success story, and he responded by saying that “YES”, it is a success story. This administration has failed every step of the way with this pandemic, and Kushner himself has been at the helm of some of the most disastrous and deadly decisions. Ring of Fire’s Farron Cousins discusses this.

Jared Kushner senior white house advisor to Donald Trump believes that 170,000 dead Americans is a huge success story. That is what he told Wolf Blitzer on CNN earlier this week during his appearance, Kushner was asked point blank by Wolf. Blitzer are 170,000 dead Americans would just still suggest that this has been a success story. That was the exact question verbatim from Wolf Blitzer, Jared Kushner responded. Yes. Look, there’s a lot of challenges. This has been a global pandemic, a lot of unprecedented challenges, but the first word there. Yes. Would you say that 170,000 dead Americans is a great success story? Yes. That is what Jared Kushner said earlier this week. And he went on to justify it later by saying like, listen, back in April, we had like 2,500 people every single day dying. We’re not seeing that now, by the way, though, to kind of correct this point, we are seeing that now we are not every single day, just like it wasn’t every single day back in April, but, but no we’ve had the deadliest day of the pandemic and it wasn’t back in April was actually this month.

So Kushner is already lying about how much better things have gotten and folks, I know we’re seeing a decline in the total number of COVID-19 cases here in the United States, but the only reason for that is because the government has slashed the testing. You know, all those testing centers, testing sites that had popped up during the pandemic. A lot of those have been shut down. So people cannot just go and get tested as easily as they could a month or two ago. And the reason the testing has been shut down is because Donald Trump was losing favor with the public because of how high the numbers were going in this country. So he says, well, we’ll fix that. We’ll just stop testing. He admitted that we’ll just stop testing. We’re not going to send out money anymore for, for States to test. That’s why we’re seeing a decline, but it’s not because fewer people are catching it.

It’s because fewer experts are catching that people have it because they don’t have the money to do the testing. And the Jared Kushner. That’s a big success, right? The guy who we just recently learned is the one who pulled the trigger on not sending aid to blue States. Cause he wanted to punish democratic governors. He’s the one who says this has been a big success, by the way, he should be prosecuted for that. I’m still kind of shocked that Congress hasn’t even considered calling him in to testify about what he did. We know this happened and he was going to let blue States die because he thought it would help Republicans at the polls. He’s also the guy running the shadow, Corona virus, task force who uh, helped with the confiscation of hospital supplies. You know, hospitals would order supplies. The trucks would be coming in. The federal government would intercept the trucks

And confiscate the PPP And whatever equipment it was that the hospitals were having delivered. And then Kushner would be the one to direct FEMA on how to redistribute it. That’s why we saw in the early days, some of these red States that didn’t have big outbreaks. They had a surplus of equipment and the blue States who desperately needed it, they weren’t getting it. And now it’s kind of flipped. The red States have run out of equipment. Nevertheless, every failure from this administration and there have been plenty. There’s been a failure. Every step of the way Jared Kushner has been there for almost every single one of them. That’s why he’s out there trying to say that. Yeah, it’s been a big success. We’re great. We’re the best.

Nobody can do better than us because he’s trying to save his own reputation. He’s trying to save his own life here. He’s tried to save his boss as well, but Kushner comes first. If he admits that it’s a failure, then he admits that he is a failure. He admits that his father-in-law’s a failure and that’s probably gonna make Thanksgiving’s a little bit awkward in the Trump house, in the future. Nothing that this administration has done with regards to the pandemic has been helpful. Nothing has been good and no decision they have made has been correct. They have managed to screw up every single thing they’ve done up to and including today,