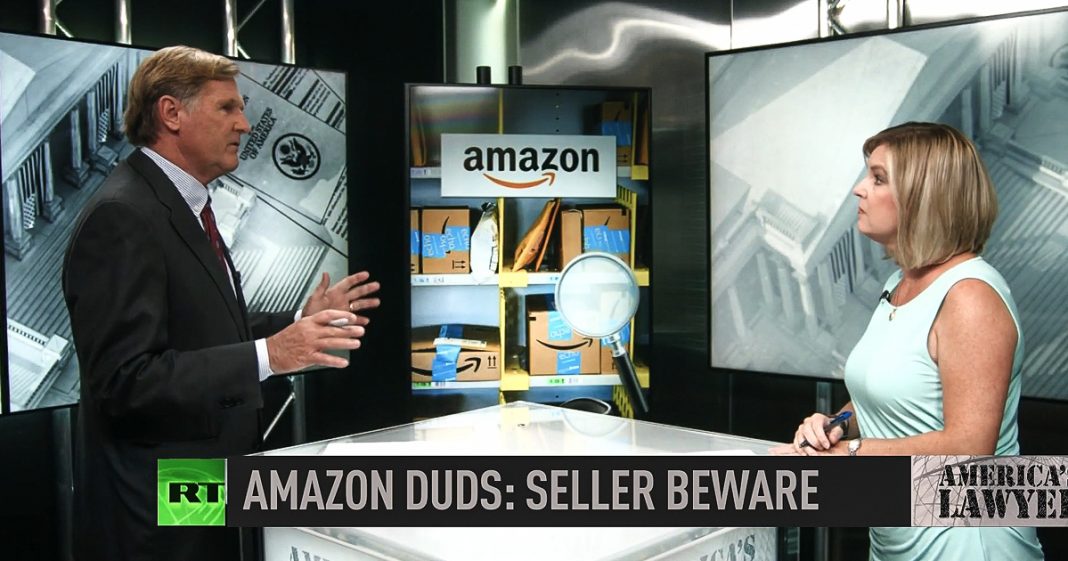 Via America’s Lawyer: Amazon can now be held liable for defective products purchased from its marketplace, including from third-party vendors. Legal journalist Mollye Barrows joins Mike Papantonio to discuss.

Mike Papantonio: A California appeals courts ruled that Amazon can be held liable for defective products sold on its marketplace. Legal journalist Mollye Barrows talks about that with me. Mollye, this is so long overdue.

Mike Papantonio: Okay. Amazon puts the product into the chain of commerce. Alright. As long as there’s no modification, no change to the product, there’s a term called strict liability. You’ve put it out there, you’ve stood behind it in terms of strict liability. It’s killed somebody, it’s injured somebody and now the ninth circuit has says, you know, I don’t think we’re gonna let Amazon get away with that anymore.

Mollye Barrows: That’s exactly right. And this came out of the appeals court in California. It’s based around a San Diego woman who ordered a, basically a replacement battery for her laptop through a third party seller on Amazon and when she received the battery, it exploded. It gave her third degree burns, caused her serious injuries, and she basically said, hey, I’m suing the manufacturer of this, the company that I bought this from, as well as Amazon, because you were negligent in allowing this product to be sold. And Amazon used the defense which it always uses because it’s faced other liability type lawsuits where they were being held responsible for damage or injuries that somebody received from a third party seller, and Amazon said what they said in those cases, which is, hey, yo, wait, we’re not a seller. We’re just providing you a platform to give you buyers and consumers and sellers a place to interact and exchange your, you know, to go through the selling process. Well, in this case, the court said, wait a second, Amazon, you’re in this every step of the way with this distribution process whether you want to call yourself a distributor or a facilitator or a seller, or even a retailer, your behavior is that of a seller.

Mike Papantonio: There’s plenty, there’s plenty of examples of this with other companies over the years. I’m amazed that it’s taken this long to tell you the truth.

Mike Papantonio: But this is no different. I mean, if you listen to what the distributors, for example, in the opioid case had to say, they say, well, we just distributed it. We didn’t do anything. We didn’t make it.

Mollye Barrows: We didn’t know it was poisonous and addictive.

Mike Papantonio: We didn’t have, we didn’t have any idea what was really going on, we just distributed it. And so Amazon wants to say the same thing.

Mike Papantonio: They want to say, oh no, we’re just putting it out there.

Mike Papantonio: No due diligence, at all.

Mike Papantonio: Isn’t that part of the problem?

Mollye Barrows: That’s exactly what the problem is. If you go into Lowe’s or Home Depot or any average retailer, if you will, and you buy a product and it hurts you, they’re just as responsible as the person who created the product, because they’re the re, the retailer, they’ve taken on that responsibility. That’s the way our laws work. And basically Amazon is not wanting to have that responsibility by saying, we’re not the seller. We’re not to be held responsible. We don’t have to go to this rigorous safety process to make sure that this products safe, like your average retailer would have to do that. So I imagine there’s a lot of reasons Amazon doesn’t want to, this is bad news for Amazon, for a number of reasons. 60% of their business, they say now is coming from these third party sellers. And people half the time when they go to Amazon, they don’t know the difference between Amazon marketplace, which is where you buy, you know, Amazon goods and then the other part, which is where you buy from third party sellers. And there’s a difference between the two and I don’t necessarily know.

Mike Papantonio: Well, actually now it’s getting ready to get a little more monstrous because now, Amazon is basically stealing the ideas of other manufacturers. In other words, they’re able to keep up with the metrics. How does this product sell?

Mike Papantonio: It sells really well, so now we’re going to go make that product that look, this is a company that’s closed down mom and pop stores all over the country.

Mollye Barrows: Yes. Gobbled them up.

Mike Papantonio: That’s not enough for them. Now they have to, now they have to actually gobble up the people who are trying to do business with them by saying, sell my product and they say, hey, I really like that. Amazon says we can sell a lot of those based on our sales information.

Mollye Barrows: That’s right. Well, and it’s interesting you bring that up because actually the court in this decision said as much, because they were saying, hey, you want to claim that you’re just a platform in providing the space for the business to occur. You’re not, you’re behaving like a seller and here’s part of the reason why. You’re basically using this data that you’re getting from who’s going to buy what, and you’re placing your ads where people are going to be inclined to buy this particular product. So don’t, you can’t actively advertise it. You can’t use the data that you’re collecting off people to know what’s selling well and what isn’t. You can’t say no, when you have a problem with the product, you can’t go through the third party seller, you’ve got to go through Amazon. They package it, they store it, they warehouse it. They keep the seller from the buyer in many ways and so you can’t have all that and say you’re not responsible.

Mike Papantonio: This, this case has potential to take Amazon back to reality. This is a reality check for them, they better pay attention. Mollye, thank you for joining me. Okay.