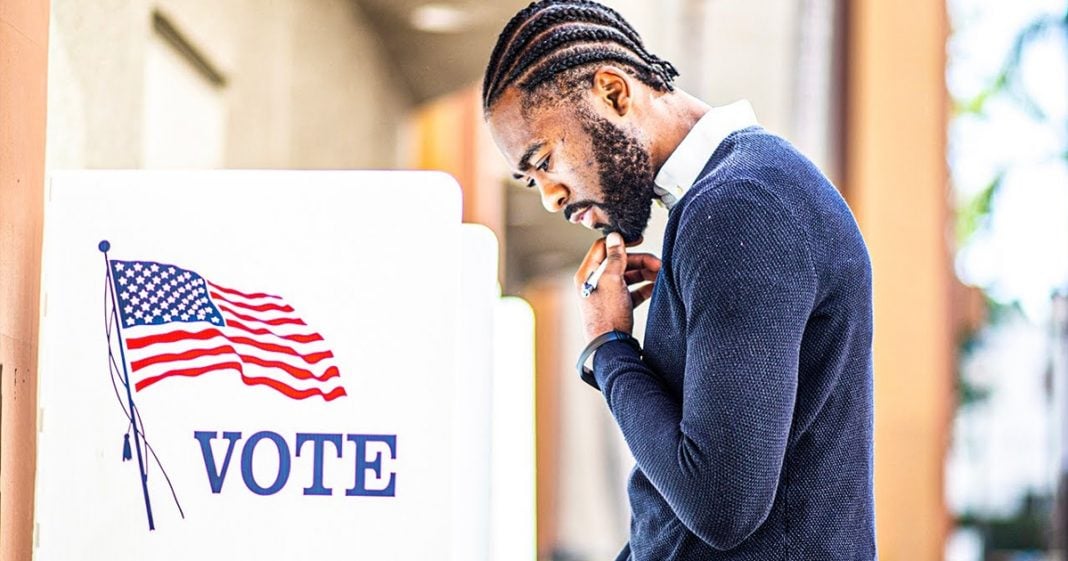 As we get closer and closer to the 2020 Presidential election, online Lefties are starting back in with their vote shaming, telling people who don’t vote for Biden that they are tacitly supporting Trump, and the anti-establishment folks on the Left telling those supporting Biden that they are selling out. Stop it. All of it. Vote shaming accomplishes absolutely nothing, and we need to move past the pettiness. Ring of Fire’s Farron Cousins discusses this.

Well folks, as we, uh, inch closer and closer to election day, we’re already seeing one of the worst things possible happening amongst those on the left. And that is the vote shaming. Now I will admit that in the past a couple of times I engaged in this activity and I have pledged to not do that for 2020. And I mean that, I am not going to tell anyone who chooses to vote third party, that you are actually voting for Trump by doing that. I am not going to tell anybody who votes for Biden, that they’re a neoliberal sellout. I’m not going to engage in any of that. And I encourage everyone to make that same pledge. I have actually seen a lot of, uh, progressive hosts publicly say these kinds of things too on Twitter. And I think it’s important that we understand right now why vote shaming is both stupid and petty because here it is lots of people on the left.

You know, those, the Progressive’s, they have some very real problems with Joe Biden, with Kamala Harris and with the democratic party in general, these are not made up grievances. These are legitimate concerns that the party is moving too far to the right, that it continues to ignore. And often mock popular policies like Medicare for all in debt-free college, that they’re not doing enough on the issue of climate change. That they’re too beholden to special interests, much like the Republicans. We criticize Republicans for it. Why wouldn’t we criticize our own people for doing the same thing. Those are legit grievances. Those are real. Those are factual. And you can’t fault the people, uh, on the left, the progressives from saying, I’m not going to do that. This is not who I am to vote for this. And at the same time, you can’t fault progressives who do say, yeah, all those things are true, but we have to get Trump out of office because he is far worse, right? The lesser of two evils isms. We saw a lot of that in 2016. And we have seen a lot of people shamed for voting for Hillary when they didn’t like her. And they were called sellouts. I voted for Hillary in 2016. I did not like her. Her platform was not nearly progressive enough or hell even liberal enough, but you know what?

I’m gonna do the same thing in 2020, I am 100% voting for the Biden Harris democratic ticket. I’m not ashamed of doing that. I understand what’s at stake. I understand that this ticket is not perfect. And I do intend if Biden and Harris win to spend every day for the next four years, pushing them further to the left and pushing for policies that actually help American citizens when they screw up and they will, I’m going to call them out for it. And I’m not going to listen to the people who say you can’t criticize them. That’s just helping Trump bullshit. I’m going to continue to criticize Democrats just as frequently as I criticize Republicans based on who screws up more on any given day, that’s kind of my job. I’m not here to be a cheerleader for any particular side. I have my personal political beliefs, But that’s okay.

Why you’re here. You’re here to find out what is happening in the world on any given day. And it’s my job to tell you. So if it’s, if it’s a Democrat that screws up, I’m going to say that if it’s a Republican, I’m going to say that because that’s what we do. I am voting for Joe Biden and Kamala Harris, because I believe the threat that Trump poses is far worse than the democratic party being too neoliberal. I can’t do anything to change what Republicans are doing to this country. I can help continue to push the Democrats and every now and then they do go further left on an issue. When we do that Obama with Keystone Obama, with Dakota access pipeline, those are the two best examples. When you get pissed, when you get out there, when you get active and you do something, you push them and it’s a lot of work and it’s unfair that we have to do that, but no amount of protest is ever going to convince a Republican to go in your direction.

That’s why I’m doing it. I’m doing it because as bad as Joe Biden is as horrible as his record is, I don’t think for a second, that Joe Biden would ever send United States troops into a us city to throw people in unmarked vans. I don’t think for a second, he would do that. I do believe he will continue the forever Wars in the middle East. And that gives me cause for concern. But I know for a fact that Donald Trump will, because he has, I also know for a fact that Trump Wilson, the United States military in to Rob people of their first amendment freedom. So, you know, I don’t see where the choices, but if you don’t want to vote for Biden, that’s your choice too. Even if you’re in a swing state and I’m not going to say that you’re helping Trump by doing that because you’re not the only way you help Donald Trump is if you vote for Donald Trump, that’s it, that’s it.

If you want to vote for the green party, because you say the Democrats done nothing to earn your party fine. Although I am curious to know what the green party has done to earn your vote other than not being the Democrats. I do think that’s a valid question. Not necessarily shaming, but you know, if you’re gonna offer one explanation, offer an explanation for that. I like the green party. I think Howie Hawkins is a loser candidate because the guy has run for office so many times and he’s lost every single time. Cause that’s the problem with the green party, great platform, decent enough party. They pick the worst candidates ever. And that’s why they’ve lost so much power over the last decade. Like they’re almost nonexistent now because they pick the dumbest candidates possible. But if that’s your candidate, you do your thing. You vote for that.

And I’m cool with that too, because we’re not going to engage in vote shaming because it accomplishes nothing. Having a holier than thou mentality over here on the left does nothing. It is not helpful to the conversations. It does not help to change someone’s mind. What it does is make you come across as a jackass who thinks he or she is smarter than everybody else. I understand that not everybody is going to agree with me, with my decision with, with these videos everyday, with anything I do, but I am 100% right now committing that I’m voting for Joe Biden and Kamala Harris. I am not voting third party. I’m not abstaining from voting. I’m voting for Biden. And I want Joe Biden to win. I did not want Joe Biden to win the primary by any stretch of the imagination, but he’s what we’ve got.

And in my personal opinion, based on the available data, Joe, Biden’s the best bet out of everybody. Who’s going to appear in the presidential section of your ballot. That sucks. That’s a shitty, shitty thing to have to say, but I believe it is the truth. You may not. And that’s great, but I’m not going to shame you for your vote. If you say I’m not voting for Biden or I am voting for Biden. And all I’m asking is that you do the same to others. You can shame me if you want. I don’t care. It probably be one of the nicer things that people say about me. If you read through comments sometime I don’t care, but don’t go out there and attack people online just because they have a different set of beliefs or different set of circumstances than somebody else.

I have less at stake in this election than somebody else. Women have more at stake than I do. They are actively oppressed minorities, African Americans, uh, Hispanics. They have a lot more at stake than I do their way of life has been endangered in the United States. Since Trump took office. Mine has not honestly, my life hasn’t changed from Obama to Trump. It hasn’t, it honestly has not. So I have less at stake. So if you want to shame me saying, I’m a neoliberal sellout, go for it. I think my history speaks for itself on that issue though. But don’t you look at somebody who has lost freedoms. They have lost rights. Don’t you dare look at them and call them a sellout because most of us are like me. We’re angry about what’s happened, but we haven’t actually seen our freedoms curtailed. Other people have. So don’t, you dare shame them for whatever they decide to do with their vote.