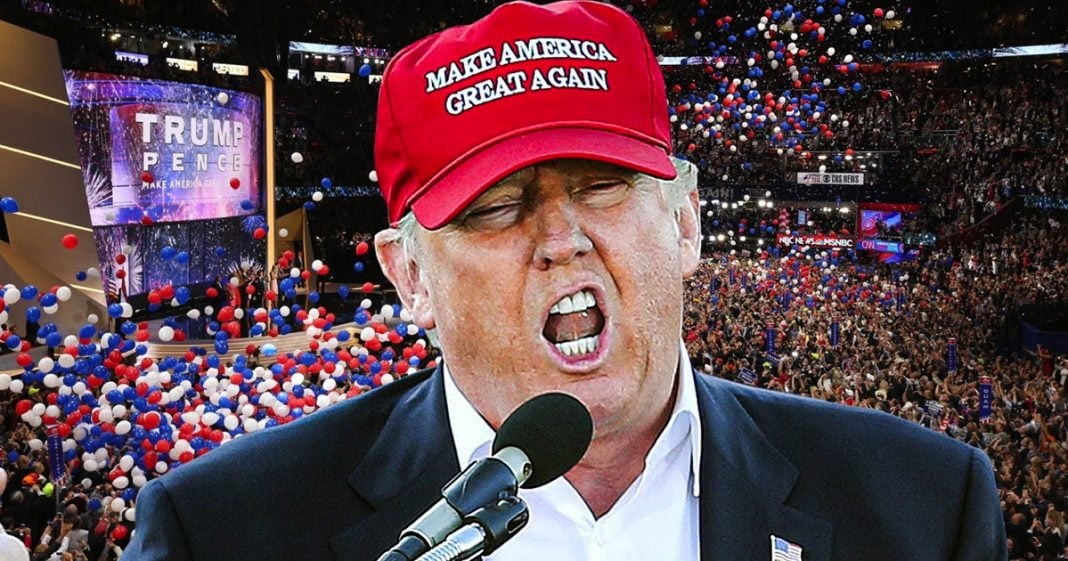 The Democratic Convention this week hasn’t been the greatest convention ever, but if you were puzzled by the DNC then get ready to be outright disgusted by the RNC. The Republican Convention beginning on Monday is going to feature washed-up actors like Scott Baio, one-hit wonders like Ted Nugent, and  internet meme sensations like the St. Louis gun couple and the Covington Catholic kid. Ring of Fire’s Farron Cousins attempts to make sense of this freakshow.

Well folks, if you thought that the democratic national convention was a bit bizarre than buckle your seat belts, because this coming Monday, you’re about to be treated to the freak show. That is going to be the Republican national convention, because as weird and tasteless at times, the DNC was the RNC is about to crank it all the way up to 11. Now the DNC had some great moments and they had some truly horrible Rendez moments, including when they paraded out the video from anti-choice anti-union Republican John Casey, uh, the speech that they had from war criminal, Colin Powell. And of course that very bizarre Billy Porter music video. And when I say bizarre, it’s not because Billy Porter not super talented as an actor and a singer, he truly is. It was a great rendition of the song. The video itself looks like it was edited by a high school kid for the high school morning news, uh, in about five minutes with really, really bad green screen.

That was a horrible editing job. I’m sorry to whoever edited it that, but it was awful really, truly awful. But again, that is nothing compared to what we’re going to start seeing on Monday night, uh, Republicans have released, uh, some of their special guests who are going to become calming next week. One of them is a Nick Sandeman who I’m sure most people remember as the coven Covington Catholic kid, the one who stood there and smiled as the native American dancer was, uh, or a musician was in his face with the drum. The media portrayed it as Sandeman, uh, being the kind of agitator in this situation. It turns out that that was not how it went. He sued the media outlets, got a big, big settlement from it. And he swears he is not done yet. And the Republican party wants to make sure that mr.

Sandman is not done yet by inviting him to speak at their convention. Now we don’t know yet what slot he’s going to be speaking in, but I imagine it’s probably going to be somewhere around the same time that Patricia and Mark McCloskey are speaking. And if those names aren’t familiar, then I’m sure their picture is because that happens to be the Saint Louis attorney gun. Couple, the couple who saw protestors coming through their gated community. They were actually headed to the st. Louis mayor’s house, walking past the McCloskey. But the McCloskey is being the terrified individuals. They are, they grabbed their guns, went out on another front lawn and started threatening the lives of these protesters who weren’t doing anything to the McCloskey is themselves. But being out there pointing guns at black people makes you a star in the Republican party. So boom, the McCloskey is, are going to be right up there with Nicholas Sandman.

Um, other speakers who are not internet famous include one hit wonder Ted Nugent. And yes, if you look it up, Ted Nugent is technically by definition, a one hit wonder. And of course, Scott Mayo, the best Hollywood has to offer, right? Uh, they’ve mocked the Democrats by the way for parading out the Hollywood types. And they, I think it’s because they’re jealous that all they can get a Scott bale. Now I agree that having the celebrities at the conventions, this is stupid. You’re getting away from what politics is supposed to be, but you can’t mock that and bend and then be like, well, we got Chachi here. Does anybody remember that show? No. Well, he’s here. It’s going to be a freak show. But here’s the thing why we know why they got Ted Nugent. We know why they got Scott Bayer. They think they’re the thick, they’re big names.

And that legit made me laughed at this. But why Sandeman one McCloskey is the answer is simple. These are people that they think are going to drum up. The average Republican. These are people that they think prove their points on issues. For example, Donald Trump loves to say that, uh, the fake news is ruining this country. Oh, Sandman was the victim of fake news. And he got a ton of money for it. Cause by the way, fake news doesn’t actually happen all that often. And when it does, they pay through the nose for it. And Sandman is a great example of that. But Trump thinks that Sandeman is an example that all of the media is corrupt and it’s all designed to make him look bad. Sandeman validates that point for him. When at least he thinks he does McCloskey. Same thing. They’re trying to say that under Joe Biden’s American America, you’re not going to be safe in your own home. And couple that with Democrats want to take your guns. This is just a good old white, a couple in st. Louis protecting their property by exercising their second amendment rights. Hell yeah. Republicans are at, and that’s why the McCloskey is you’re there. It’s pandering. It’s juvenile. It’s very immature and blatantly incorrect, but that’s why these people are there. It’s not going to be pretty. It’s not going to be fun. And again, the DNC hasn’t been that great, but next week’s RNC is going to be a total freak show.