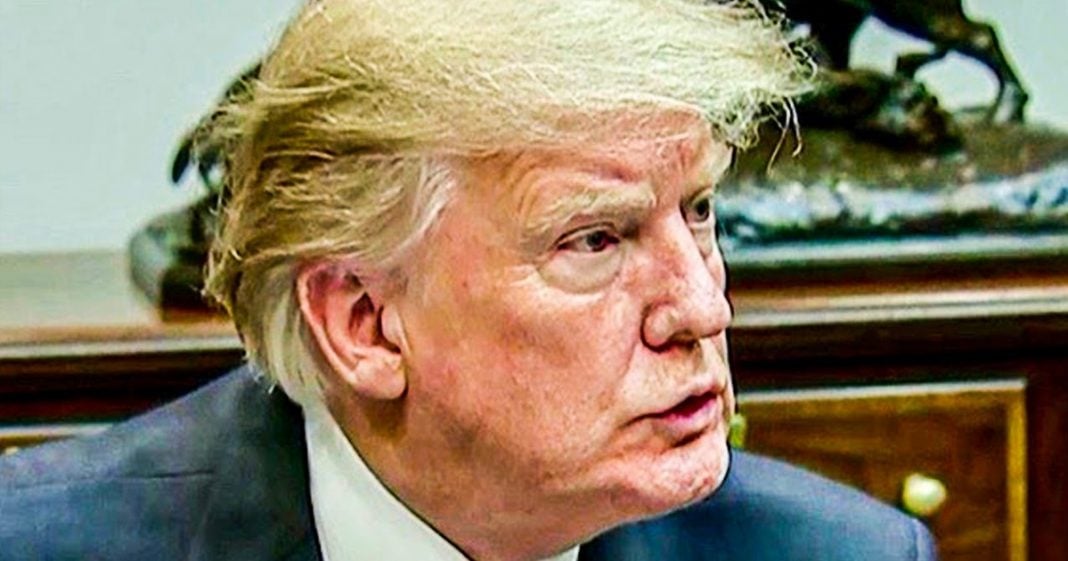 Donald Trump suffered a major legal setback on Thursday when a judge threw out his lawsuit to shield his tax returns from investigators and prosecutors in New York. This is the second time since his Supreme Court loss that a judge has thrown out his case, leaving him with very little option other than to hand over the documents – as most of his banks have already done. Ring of Fire’s Farron Cousins explains what’s happening.

So Thursday was a pretty bad day for a pretty much everybody in Trump world. Obviously, first thing in the morning, we got news that Steve Bannon was arrested along with the other frauds. From there, we build the wall, a campaign, and then less than an hour later, a district judge in New York threw out a lawsuit, brought by Donald Trump, seeking to block a subpoena from a Manhattan da side, Vance seeking his financial records from his accounting firm, maze ours. So what did Trump do? Well, he freaked the hell out and he had his lawyers file several immediate injunctions to prevent the subpoena from being enforced. So that side vans could not get his hands on those financial records. So let’s back up, right? We do know several months ago, obviously the U S Supreme court said, listen, you are not immune from prosecution. You came in here, you made a very dumb argument that you can’t be even investigated.

That’s not true. You can be investigated. You can be subpoenaed. Your documents can be handed over. It was not a blanket like hell yeah, give them the documents. It was under certain circumstances. Um, yeah, yeah. Can be investigated. You can be subpoenaed all of that. You’re not immune from anything. If according to the Supreme court ruling. So after that the, uh, administration Trump’s lawyers filed another lawsuit seeking to block it. The first judge said, Nope, you can’t block it. Supreme court said you can’t, you, they have a valid reason for wanting these you’re out of your out of line. So then yesterday, the most recent judge, the district judge looked at the legal argument that they presented upon appeal. And he said, you guys are saying this was overreaching, that it’s unfair. Uh, you’ve also provided zero evidence to prove anything you’ve said. And therefore I’m ruling on the side of the subpoena on the side of the, the da.

They can enforce the subpoena because you haven’t made a legal argument. It was actually quite a remarkable ruling because the judge was straight up telling them, like you came in here, you made an argument. That’s not even real. You didn’t present any evidence. What do you expect me to do in this particular instance? And that’s the thing. I think Trump is having his lawyers intentionally forget. I mean, lawyers know this, they know how to file cases, but I think Trump is forcing them to file these lawsuits according to his own desires. For example, the one that went to the Supreme court, arguing that the president’s immune from any and all prosecutions and investigations, no competent lawyer is actually going to go to the U S Supreme court and make that argument. Unless of course their client, Donald J. Trump tells them that they have to. That’s embarrassing for those lawyers.

Now for this one to walk into a court and argue in front of a judge without any evidence to back up your claim, no lawyer’s going to do that. Unless of course their client tells them they have to. So I think 100% Trump is pulling the strings. He is handicapping his own lawyers. He is as you Juul his own worst enemy. And I am loving every second of it because as I mentioned, Trump is freaking out. Here’s what happened shortly after the judge’s decision was announced on Thursday, Trump’s legal team filed an emergency motion, asking the judge for a delay in enforcing the subpoena. So Trump could appeal. The team, also asked a federal appeals court and the U S Supreme court to intervene and stay the judge’s ruling, preventing the subpoena from being enforced while the case is appealed again. So they essentially, you’re trying to send this entire thing back all the way through the court system. Again, it’s been ruled upon And because they cannot seem to make a cogent legal argument backed up by any evidence, they stand very little chance of being successful.

You know, the Message was clear from the Supreme court. You can be indict on the not indicted. You can be subpoenaed. You can be investigated, you know, as long as it’s not, you know, very overtly a witch hunt, you know, there’s nothing you can do. You can’t stop these things. You can’t block them, but this administration is going to continue doing that. And they’re going to go round and round and round and round until maybe it’s going to happen here until a judge comes out and says, no, I’m not going to stay. The ruling ruling goes into effect right now, hand over the documents may as ours. And we know this isn’t a fishing expedition. Uh, these investigators have met repeatedly with Michael Cohen, Donald Trump’s, former lawyer and fixer Cohen in his testimony to Congress laid out the fact that Donald Trump, he believes based on what he saw, committed financial fraud, committed bank fraud, wire fraud, uh, possibly tax fraud, all of the frauds, you know, basically you name it. If it has to do with money and fraud, Michael Cohen was telling us, Trump has probably done it. And that is what really sparked these investigations along with, and this has connected, uh, the payments to Daniels.

Because again, Cohen provided the receipts and they don’t match up because they paid it to Cohen as a legal fee, but it wasn’t actually a legal fee. So yeah, the president’s in a lot of trouble for that as well. The Trump organization is going to be in a lot of trouble for that as well. They can fight this. They can argue it, all they want. The problem is Trump is the one telling these lawyers what to say and how to file it. And that is absolutely destroying his case. But even if he weren’t at this point, these lawyers do not have a case to present. And they know it. All they’re doing is dragging down their own reputation in exchange for some cash from the president. That’s what’s happening with these lawyers that Trump has hired. They know they stand no chance of winning, But they also know With president of the United States as their client. Yeah, those are probably some pretty amazing billable hours that these attorneys are getting. And they don’t care if they have to drag their names down as serial losers. For the case, all that matters is how much money they get to put in their own pockets, Right? That’s the problem. These guys were men, women, whoever they are, I don’t even know. They should know.

This is a losing case. They have a losing argument because they’ve lost every single time they’ve gone in front of a judge, including at the Supreme court. What more do they think they can do? You know, this is one of those things. This, these are the kinds of cases that do give lawyers bad names, right? This is what leads to those like Lionel huts types on TV. These characatures of lawyers, people like this. But at the end of the day, we also have to remember one very important thing. Trump has been trying for years through every legal Avenue possible to hide his bank records. He doesn’t want the public to see. He doesn’t want us to know. And more importantly, he doesn’t want investigators to know. He doesn’t want law enforcement to know the guy that keeps tweeting out in all caps, law and order is doing everything possible to stop actual law and order for coming to him. There is something there. There’s no doubt you’re lying to yourself. If you think this man, isn’t trying to hide something or cover something up, he wouldn’t have fought. He wouldn’t have spent probably at this point, hundreds of thousands of dollars on lawyers just to protect these financial records. If there wasn’t something in there that he knew was going to cause him a lot of legal problems, I think that’s what we’re dealing with. And that’s the part we need to focus on. He wouldn’t be fighting this hard if he didn’t have something to hide.