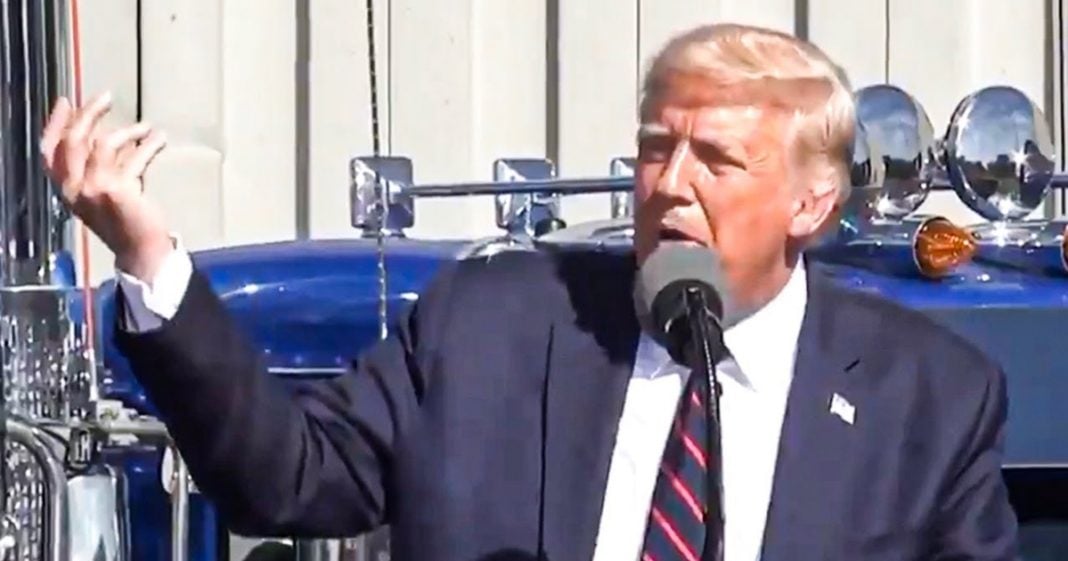 Donald Trump appeared in Joe Biden’s home state of Pennsylvania yesterday, trying to undermine the former Vice President on the day that he accepted the Democratic nomination. But luckily for Joe, Trump made a complete fool of himself and probably didn’t win over any voters.  The President rambled on and on about water in Pennsylvania, stringing together a bunch of lies that made him sound like he was having a stroke. Ring of Fire’s Farron Cousins discusses this.

Yesterday, Joe Biden, uh, formally accepted the nomination for the democratic party’s presidential candidate. So he is no longer presumptive. He is the nominee and being from Scranton, Pennsylvania, as he loves to point out Donald Trump thought that yesterday would be a perfect day to head over to Scranton steal. A little bit of Joe Biden’s thunder, uh, not a bad campaign strategy, little underhanded, but Republicans do those kinds of things. But, uh, luckily for Joe, Trump went to Scranton and showed that he’s even crazier than people thought. Take a look at what happened when Donald Trump went to Pennsylvania and tried to steal voters away from Joe Biden.

Donald Trump: I mean, does Pennsylvania have a problem with water? No. Yeah, you have a problem with water, you have too much of it, right? You have too much water. You got to get rid of it. So why are we having restrictors? They have restrictors on, so I took it off. These are little things I tell you about them, a lot of people appreciate them. A lot of people don’t know about it, but now you can go out buy a light bulb for a tiny fraction of the cost. It’s better. Won’t last as long, but it’s better.

That’s right. Folks. He once again, went into his bizarre and unhinged rants about water, water, pressure, water, coming out, shower, a water coming out of the ground, just fricking water everywhere. And according to him, the state of Pennsylvania, You’ve got so much water that, you know, you just, you gotta send it away. So what are you gonna do with water? If you don’t get rid of it, it’s just going to flood you, I guess, is how water works in Pennsylvania. I don’t know. Uh, I’ve spent very little time in Pennsylvania. Didn’t really pay attention to the water while I was there. So, you know, I’m, I’m no expert on Pennsylvania waters, but you know what, actually, according to the experts in Pennsylvania, uh, Trump’s policies specifically, all of the cutbacks he has made to the EPA have actually made Pennsylvania’s water, incredibly unsafe for residents of Pennsylvania. So while the president is sitting there and Scranton talking nonsense, that makes him sound like he’s having a stroke about water pressure, uh, telling the people of Pennsylvania, you have so much water and your water is great.

Meanwhile, the experts for two years now in Pennsylvania have been saying that Trump’s cutbacks at the EPA. Other state cutbacks surrounding Pennsylvania have made Pennsylvania’s water, dirtier and less safe for the residents of Pennsylvania. And that is just one of actually several thousand right there in Scranton, several thousand areas across the country that have unsafe drinking water. So if Trump wants to talk about water, there is plenty to talk about with regards to water, but water pressure, you know, people having to wash their dishes numerous times in the dishwasher, those aren’t actual problems, the dishwasher thing isn’t even real. It’s not, if you’re unhappy with your water pressure, maybe switch out your shower, head, Uh, you know, assuming you not in an apartment and you’re able to do something like that, but yeah,

Yes, not a real problem, right? It’s not a, Oh my God. My life is ending kind of problem. Not like, you know, getting cancer from drinking, the tap water or getting severe brain damage or your children getting brain damage from drinking, the tap water, which is what happens when there’s too much lead in it, right? Those are real problems. And those are real problems that we could actually solve. If we had a president who was at least minimally competent, but unfortunately we don’t have that. We have a madman who likes to go places across the country and complain about water pressure. When we have a very real water crisis in this country today,