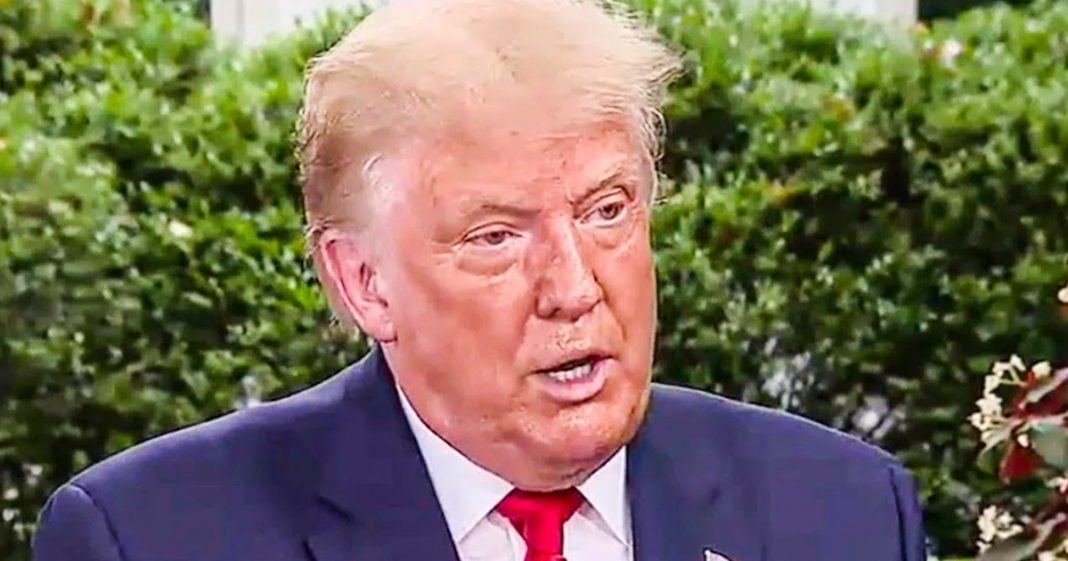 Donald Trump sent his lawyers to the Supreme Court this week to beg them to let him start blocking people on Twitter again. Apparently the President is sick and tired of getting his feelings hurt by the trolls, so he wants to use the power of the block to get rid of them for good. This man has the thinnest skin of any elected official in office today, as Ring of Fire’s Farron Cousins explains.

If you were to ask anybody in Washington, D C what the biggest issue facing America right now is, uh, nearly all of them. In fact, I think all of them, except for one would probably say the pandemic, the one person who would not say the pandemic would likely be Donald Trump. And he would clearly tell us that the biggest threat facing the United States today is the fact that he cannot block people on Twitter. Because right now at a time, when we still have plenty of civil unrest in this country, and this man is doing nothing except making race relations worse at a time when we still have a pandemic raging through, and now it’s raging through our schools, as those reopened the president, instead of dealing with those issues, actually sent his lawyers, uh, to the Supreme court and they filed their petition with the Supreme court this week, begging the court to please for the love of God, let Donald Trump block people on Twitter, because apparently this is an important thing.

You know, he didn’t have to have them file this petition. They could have just said, okay, well, the court said we can’t block people. We just know we’re not going to worry about it because it’s not worth it. But to Trump, apparently it is worth it. He does want to be able to block people on Twitter because every reply that is not one of those, you know, John eight, seven, eight, nine two one eight, do.dot, you know, bot type people, anyone that’s not one of those praising him. He gets mad. He truly does. I know it seems juvenile, but those people who go out there and routinely troll the president on every single post that he makes those piss him off, off. And he said, even matter now, because he can’t do anything about it, but he wants to, because when it comes to all of the problems facing the United States today, this is the one thing he actually wants to do something about, right.

I’m sorry. You know, if your kids go to school and catch COVID, you know, I’m sorry that we have all the civil unrest in this country because the cops keep killing unarmed black people. There’s nothing we can do about that. I’ve gotten my people from the DOJ, by the way, uh, they’re kind of working overtime, trying to get me to be able to block people on Twitter. You know, Hey, get, pick your battles folks. And he’s picked his it’s about making him feel better. He doesn’t wanna have to see your trolling posts. He doesn’t want to have to see the same three people immediately respond to every single thing he posts on Twitter. And I think we all know who I’m talking about too. If you’ve ever clicked on one of Donald Trump’s posts on Twitter, uh, you see like the same three people immediately replying.

One of them is a, are they it’s Eugene, you chew? I think of a chew. The other guy with the beard that kind of looks like Eric Clapton. He’s one of them. And then there’s another one too. I can’t remember their names, but it look, it annoys me too to see these people constantly there as well, but I’m not about to have a hissy fit over it. I’m not sure about to cry about it. I’m sure as hell, not the, not about to file a lawsuit over it, dude. You’re the president of the United States. If you want to block people on Twitter, all you gotta do is resigned from office and then you can block any and everyone on Twitter or that you choose. That’s the exchange. Are you willing to make it.