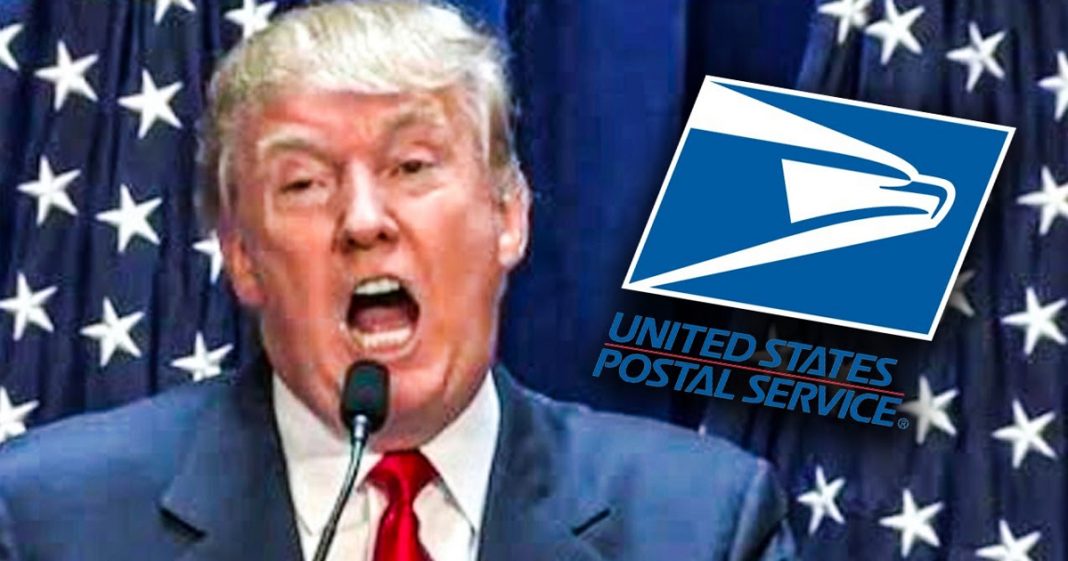 Postmaster General Louis DeJoy may not be causing any further damage to the post office until after the election, but the Trump administration is refusing to let post offices fix the damage that has already been caused. According to postal emails, local offices have been told that they are not allowed to reconnect any of the equipment that has been removed, meaning that nothing is going to change about mail delays. Ring of Fire’s Farron Cousins explains what’s happening.

In spite of the fact that earlier this week, a United States postmaster general Louis DeJoy announced that he was going to stop sabotaging the post office, at least until after the presidential election. Um, it was revealed an internal email from the post office was revealed that told postal maintenance workers that they were not allowed to reconnect any of the equipment that had been removed from their offices, which includes obviously the mail sorting machines that had been in their offices for years. They were removed under the joys orders. And now, even though DeJoy says, I don’t want to give the appearance that I’m messing with the election. Don’t worry. I’m not going to touch anything else. I’m sorry for what I did. They’re still out there saying, okay, now that we’ve distracted the public, don’t plug that stuff back in. Don’t bring it back into the building. You don’t get to you lose it.

Because if you do then, you know, it solves all the problems and everything that we’ve already done is for not here’s what that email said. Please message out to your respective maintenance managers tonight. They are not to reconnect or re-install machines that have previously been disconnected without approval from HQ maintenance, no matter what direction they are getting from their plant manager. So that means even if the, uh, manager at that particular office says, yeah, yeah, okay. We can go ahead and bring it in. They’re not allowed to do it. They have to go to the top of the postal food chain in order to get approval for that. And that is from Kevin couch, the director of maintenance operations for the United States postal service, please have them flow that request through you. Then onto me for a direction, a subsequent email sent to individual maintenance managers across various regions forwarded that request along with a single sentence, we are not to reconnect any machines that have previously been disconnected. So the damage

She’s done, the damage that Louis DeJoy did is done. The reason he came out earlier this week and said, I’m not going to do this anymore. I don’t want to give the appearance is because he wanted to fool the public to load them into this false sense of security so that they would think that everything was okay. Now they would think that everything was going back to normal, but it’s not everything he had already done is still in place. All of the damage he had caused that was already, by the way, causing all of these mail delays. People were two weeks behind on receiving their medications because of his mail delays. People trying to mail payments back to the IRS have seen those delayed and that can get you in a lot of legal trouble by the way, folks. And that is what they’re doing. Not to mention the very obvious voting by mail problems that this is going to cause to joy didn’t fix anything.

He broke it enough to where he said, cool. I think we’re safe now with it being this broken walk away and act like we have was like this when we found it, but that’s not the case. Again, don’t ever forget that they are doing this to steal your vote. They’re doing this so that you do not go out there and cast a vote if you can vote by mail. Do so. If you can vote by mail early, do so as soon as humanly possible. And if you’re willing to risk it, if you have a mask, if you can socialize the distance, vote in person, if that’s what you choose, I don’t care how you do it. I don’t care which way you do it. All I care about right now is that you do it because if your vote wasn’t sacred, they wouldn’t be trying to steal it from you.