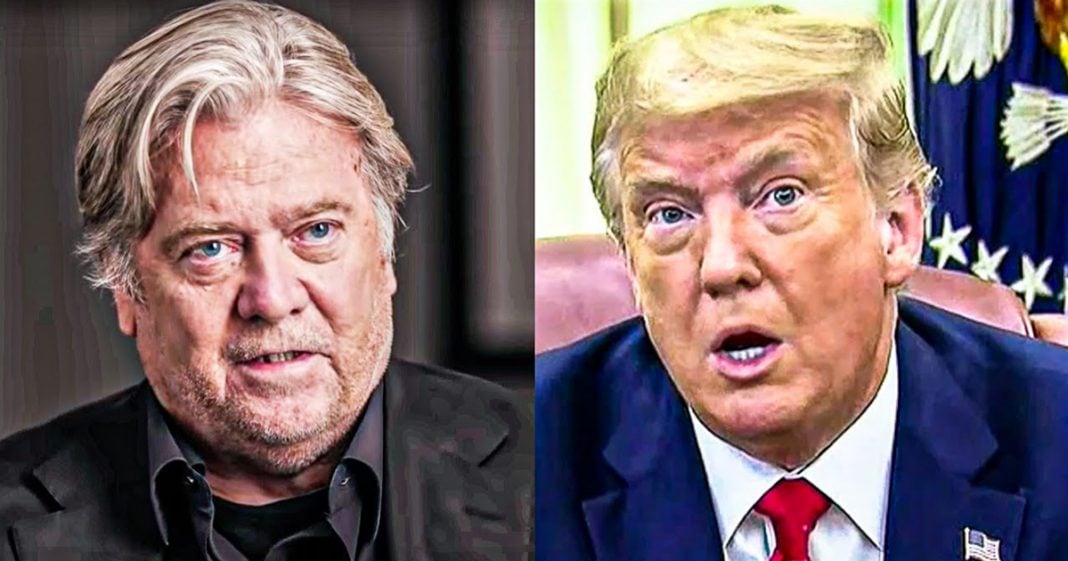 According to the indictment against Steve Bannon, the former Trump strategist was using donor money to help build up a flotilla of pro-Trump boats in order to make the Trump boat parades look bigger than they actually are. This explains so much and helps us to understand why the administration likes to tout these particular occurrences – because they are likely not organic! Ring of Fire’s Farron Cousins discusses this.

So yesterday, Donald Trump’s old friend, Steve Bannon was arrested for fraud tied to the group. He was a part of, we build the wall, which is actually started by right wing grifter by the name of Brian Kolfage. Now, shortly after it was announced that Bannon had been arrested. He was actually arrested on the yacht of a Chinese, a dissident. Um, Trump was asked when he was actually in the middle of a photo op with the Iraqi prime minister. He was asked how he felt about as good buddy, Steve Bannon being arrested. And, uh, he said the following, he said, quote, it’s a very sad thing. I haven’t been dealing with him for very long period of time. Uh don’t know anything about the project at all. I don’t like that project. I thought it was being done for showboating reasons. I thought it was inappropriate to be doing, you know, it’s a very interesting, uh, choice of words.

They’re show boating, right? Showboating. Cause I mean, as you just mentioned, Bannon was arrested on, on a boat and on somebody else’s boat. But, uh, actually boating is one of the things that got Bannon and Cole phage and all of the others in trouble because it turns out that one of the things that this group spent money on was at least one boat so that they could participate in one of those boaters for Trump rallies. And if you think that Donald Trump didn’t know about this, you are kidding yourselves. First of all, his thing, your, I didn’t like the group. I never thought it was inappropriate. Um, you actually endorsed it. Your son actually endorsed it. Uh, Kris Kobach, you know the guy who ran your little voter fraud commission, he confirmed her reporters back in January of 2019 that you did give the group your blessing.

So you can’t, you can’t lie your way out of this one. We know that you liked what they were doing and you supported it. Steve Bannon was still a good friend with your, of your Steve Bannon has been in contact with the white house. So you’re not going to tell me, well, you’re not going to convince me that you didn’t know what was going on. In fact, I I’m starting to believe at this point that this is why Donald Trump likes to hype up these boaters for Trump rallies. I think Bannon has been helping to coordinate these things. These are not organic at all. They are not organic. And according to this indictment, we do now have evidence that some of these people like Bannon and the boat that we build, the wall bought. It’s a total fraud, total and complete fraud. I would not be surprised to find more instances of this. These boaters for Trump parades are not organic. They are not just a bunch of average people out here, which boats and your Trump signs going down to buy you. That’s not what it is. It’s all a farce. And it always has been because every thing with this, the administration is fake. Everything is window dressing, make it look bigger and better and better than it actually is.