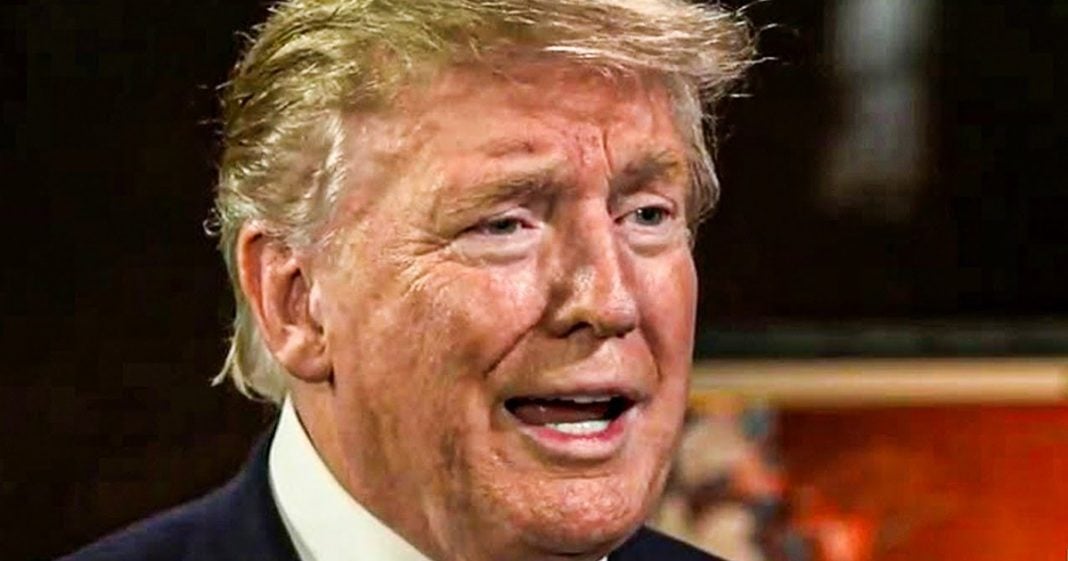 During a press conference on Wednesday, Donald Trump went full QAnon by not only embracing the conspiracy theorists, but by claiming that they are correct about his mission. This is a group that the FBI has claimed poses a threat to the safety of the United States, and the President is openly welcoming them into his circle. Ring of Fire’s Farron Cousins explains what’s happening.

Yesterday, Donald Trump decided to fully, and finally, I guess, embrace the Q Anon conspiracy theory that he has somehow become the chosen one to go out there and save the planet from a cabal of pedophiles. Um, that is one of the things that Q Anon believes. And yesterday during a white house press conference, Donald Trump actually not just embrace them, but said, yeah, um, I’m pretty much doing that right now. Take a look at this press conference Theory. It is this belief that you are secretly saving the world from this Titanic Colt of pedophiles and cannibals. Does that sound like something you are behind or

I haven’t heard that, but, uh, is that supposed to be a bad thing or a good thing? I mean, you know, if I can help save the world from problems, I’m willing to do it. I’m willing to put myself out there and we are actually, we’re saving the world from a radical left philosophy that will destroy this country. And when this country is gone, the rest of the world would follow. The rest of the world would follow. So what’s happened now as of yesterday, is that QAnon officially became mainstream within the Republican party. And I know they’ve got to what’s her name over there that won the Republican primary in Georgia. Can’t quite remember her name, unfortunately, uh, she is a Q Anon supporter. She’s in a deep red district. She is eventually going to become the first Q Anon member of Congress. But yesterday with the president of the United States, embracing it and essentially giving them a wink and a nod confirming their conspiracy theories.

Uh, that’s a line that I honestly didn’t think we’d ever cross, but we’re here and now we, we gotta deal with this thing. Uh, and by the way, it’s not just liberals, Democrats, leftists, who are progressive, who think that, uh, we need to do something about this. Uh, it’s also conservatives see, after Trump made his, uh, announcement that yes, we are doing what Q Anon says we’re doing yesterday. Fox news decided, well, I guess we gotta talk about this. So on Brett bear’s program, he asked his panel, uh, which include acts included, Axios reporter, Jonathan Swan, uh, Jonathan Swan said, yeah, you know, this is a, I can’t believe he did that. And then the other panelists went even further. And the other panelists who happened to be on at that time was Carl Rove. Carl Rove had the following to say about Trump’s little wink and nod to Q1 on Rove said, this is a group of nuts and kooks.

And he ought to disavow them. They may like him, but they like him because they think he’s fighting an incredible war against forces of pedigree, Epic, evil, and it’s just ridiculous disavow, disavow them get done with it. Uh, he also went on to say that this was a big mistake on the part of the president in case you didn’t get that far from his earlier statement there. Um, so that’s where we’re at Democrats hate it. Republicans hate it, but the president is willing to embrace anyone that loves him. Anyone that thinks he is the greatest thing to ever happen to things really. Um, but here’s the truth about Q Anon. They have had several of their members, supporters, cultists, whatever you want to call them arrested, uh, some for extremely violent crimes, some for going out to commit extremely violent crimes, but luckily were stopped before they got the chance to do that. In fact, uh, one of them was arrested just a few months ago earlier this year, uh, for plotting and like actually going out on the mission to kill Joe Biden, but she was arrested. This is Q Anon, the FBI last Gear, essentially.

He said that this is a homegrown terrorist group. They’re a violent extremist group, according to the FBI, right? These, these are the real deal. In fact, Q Anon is actually what conservatives like to think. Antifa is a, nobody from Antifa has ever been arrested for murder, a murder or attempted murder, uh, as part of their activities with Antifa Q Anon on the other hand, has they are violent. We have seen their supporters commit these crimes. Uh, officers go back to their homes, search them. They find huge caches of, of, of guns and ammunitions and other weapons and plans of the horrible things that they would like to do. And let’s also not forget why we know what Q Anon is because of comment. Uh, ping pong pizzeria that got shot up. Thank God nobody was killed, but that’s what put Q Anon on the radar was an attempted mass shooting because of this weird pedophilia conspiracy theory that they have been pushing.

They also, for the record, believed that the Mueller investigation was not actually investigating Trump. They believed that Mueller was there, uh, at Trump’s request to investigate Perak Obama and Hillary Clinton and all these other people. I have a question for the Q Anon types here, right? Why is it that you think Trump is the one fighting this war against the cabal of pedophiles? Have you not seen all the pictures of the dude hanging out with Jeffrey Epstein and just lane Maxwell? I know Trump has not been accused of any wrongdoing yet with that whole saga. Uh, but the guy who palled around with a convicted pedophile for 10 years. Yeah. I don’t think he’s the one that’s actually going to put an end. It, I don’t think he’s fighting it in any way. Um, he has not done much on the, the arena of human trafficking either, by the way, they think he’s out there helping to fight that he truly is not folks.

I don’t understand why these conspiracy theories develop. I don’t know who comes up with them, but I do know that these people are dangerous. We have seen it. You know, the FBI has reports on this. Those are real. This is not a fabrication. This is not hyperbole. We know that these people are dangerous. And yesterday we had the president of the United States openly embracing them. Now that’s the point we’ve hit in this country with the president of the United States is no longer the grownup in the room. No matter what room he’s in, he is the one pushing these dangerous conspiracies. Now he is the one embracing these individuals. We would not, we would not have seen this from previous American presidents. And that to me just continues to blow my mind that we have actually hit this point. You know, every time Trump sinks to a new low, we always think, wow, probably not going to get worse than this.

And then he goes, and he does something like this. He holds a press conference and he says, Hey, you know, they’re good people, which is one thing he said. He said, you know what? I am, I am doing this thing. They’re saying, because I’m fighting back against the forces of liberalism and all this horrible stuff to know that I’m just the greatest. And this is dangerous folks by empowering these dangerous individuals who have proven time and time. Again, they are more than willing to go out there, sacrifice their own lives to fight this invisible war that only they can see, yeah, this is dangerous. The last thing we want in America today is an empowered emboldened and active Q Anon. And hopefully the next president of the United States has enough sense to label this group. Exactly what it is exactly what the FBI likes to call it. And that is a terrorist group. They’re violent extremists, according to law enforcement agencies. And this is also according, by the way, to internal documents from police departments across the country, they know what these people are capable of. They know what these people want to do, and that is never something that you would want the president of the United States to openly embrace.