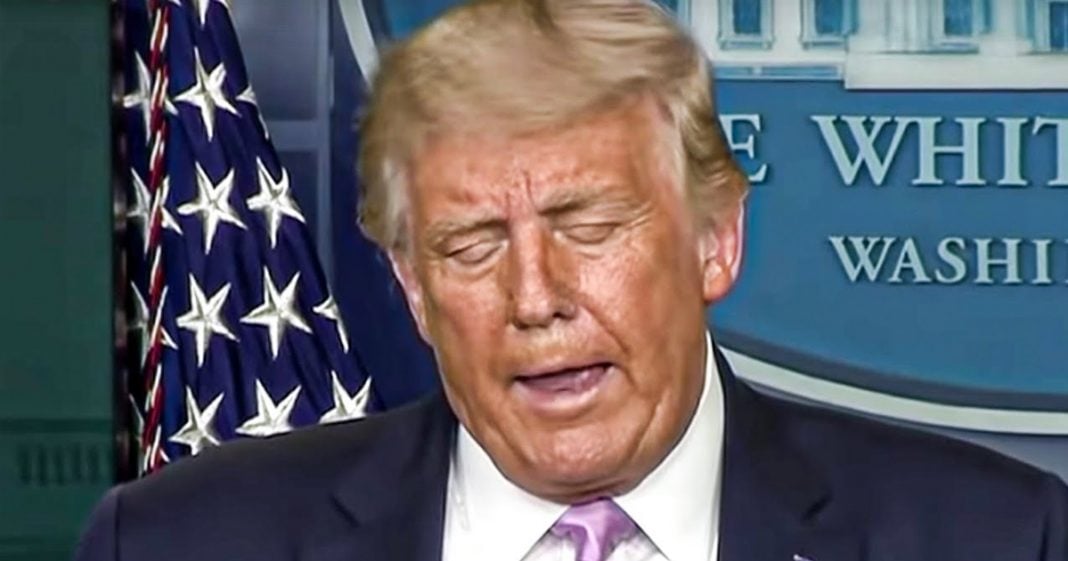 Conservatives love to paint liberals as being snowflakes who have meltdowns at the drop of a hat and engage in cancel culture as a result. But the truth is that Republicans – including the President – have called for far more boycotts in recent years than liberals after conservatives got their feelings hurt. This week, it was Goodyear Tires in Ohio who said that they didn’t want people wearing political apparel in the factory, including MAGA hats, and this sent Trump into a Twitter rage where he called for boycotting the tire company. Ring of Fire’s Farron Cousins discusses this.

You know, I love how conservatives always try to paint the left is these, you know, precious little snowflakes. They can’t stand anything that doesn’t fit into their little worldview or everything offends them. And they’re always calling for boycotts and they created this cancel culture. It’s hilarious because the reality is that that is projection. If we have ever seen it in this country, folks, conservatives are the ones who get offended at every little thing. They’re the ones who find fault in every decision that is made and how it somehow impacts negatively their life. We saw that this week with Donald Trump, when he announced his boycott for Goodyear’s tires, Goodyear tires, a company that employs 60,000 American workers, a company based in Akron, Ohio, Ohio, being a swing state that the president needs to win. He straight up called for a boy caught of this American company in a swing state during an election year because he’s that fricking stupid.

Here’s what Donald Trump tweeted out. He said, do not buy Goodyear tires. They announced a ban on mega hats. Get better tires for far less. You know, it’s always great to have a president that essentially reduces himself to a used car salesman. Right? Get better tires for four less. Come on down to crazy Trump’s tire world. This is what the radical left Democrats do. Two can play the same game and we have to start playing it now. Uh, no, for the record, this is not actually what the radical left does. Uh, they do. I mean call for boycotts. We’ve seen it at Tucker Carlson guys got like five advertisers, LA advertisers left. It shows not making much money anymore, especially considering what’s what he’s paid. Hasn’t changed the viewership at all, but it has reduced the amount of money. So Fox kind of having to pay out of pocket to keep Tucker on the air, say, Hey, that’s a win, win, right?

Um, it’s conservatives though. Remember, remember the idiots. When Nike hired a Kaepernick, they started lighting their Nike’s on fire. And some of them actually did it while they were wearing the shoes, lit them on fire. Remember those super expensive Yeti coolers that they shot was shotguns because they weren’t going to offer discounts to NRA people anymore. The Keurigs, uh, they broke their $200 coffee pots dropping, dropping them off balconies because they weren’t gonna advertise on Sean Hannity anymore. Liberals have never done that. Okay. We’re we’re not that crazy. We’re not going to destroy something we’ve already purchased. Cause cause then we lose money. We’re not idiots, but what we’ll do instead is say, Hey, okay, this company sucks. We’re not going to go there anymore. I’m going to spend my money elsewhere. We’re not going to take something. We spent several hundred dollars on and say, take that company that already has my money. No. Why am I so dumb? Because you’re a Republican. Um, so anyway, Trump says the left does this all the time. Luckily a reporter by the name of PLR Melendez over at the daily beast, actually put together a list of all of the companies that Donald Trump has called for boycotts against over the past few years.

We’re not this way. We’re not that way. We’re not making a stand. We’re not making a statement. We’re just working. We’re just making tires deal with it. That’s the company’s actual policy. But what got conservatives all worked up was that somebody created a phony slide from a phony PowerPoint. Uh, that allegedly was from a, a Goodyear diversity training video. Uh, it turns out that it doesn’t exist. Somebody made this and threw it online. And it had on one side, a picture of like a black lives matter hat of a LGBTQ, uh, flag. And it said these are acceptable. And on the other side, it had the blue lives matter, all lives matter in the maggot hat. And it said, these are not. So somebody created this graphic claim that it was from a good year, a training video. And that’s what calls conservatives to freak out because God forbid anybody take two seconds to do any research.

The company came out and said, we don’t know what this is, but it’s definitely not. From our diversity training videos. We don’t do this. We don’t allow any kind of political stuff left. Right center. Doesn’t matter. You’re not going to wear it at work. You’re just here to work. You’re not here to make a statement. You want to make statements on your own time. Fantastic. Do it, go out, be active. But when you come here, just make a damn tire. But conservatives had already freaked out. Trump is threatening to pull the Goodyear tires off the, uh, white house vehicles. I don’t even know if they have Goodyear tires on them. And I know he doesn’t even know that. Uh, so we’ll see what happens. This whole thing is ridiculous folks. But trust me, next time you hear somebody say that a liberal, a progressive is a snowflake. Please understand that that is nothing more than projection because for every instance of a liberal being outraged, we can find 20 of Republicans doing the same thing.