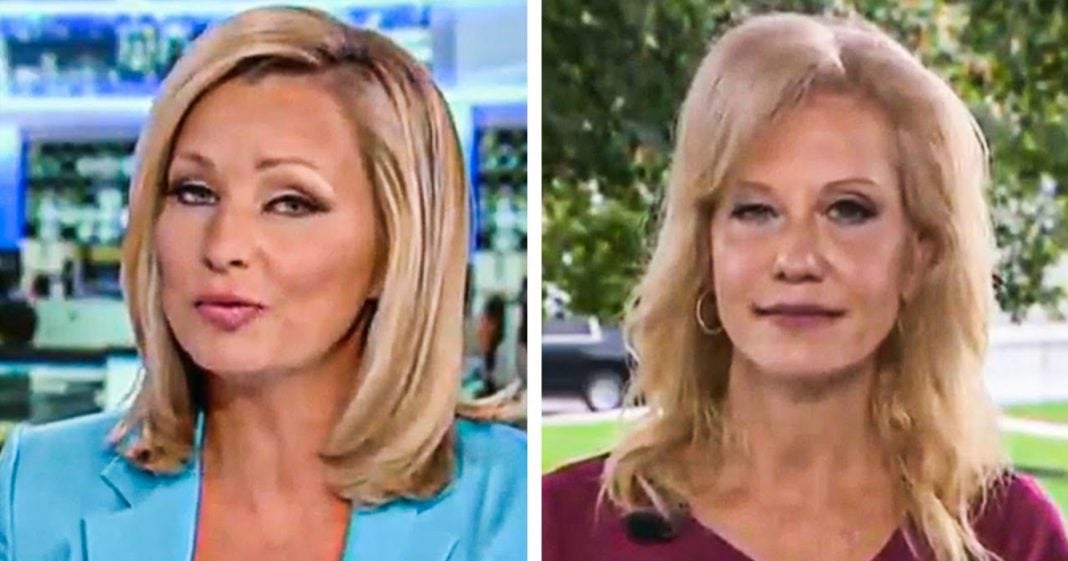 Kellyanne Conway is being a loyal stooge for Donald Trump by going out and actively campaigning for him. But that doesn’t mean that she is free to lie on his behalf, and even the hosts on Fox News appear to have had enough of Conway’s lies. On Wednesday, Conway got busted trying to lie about Joe Biden’s pandemic plan, and then proceeded to lie about her lie, all while being called out by the network. Ring of Fire’s Farron Cousins explains what happened.

Now that a campaign season is really kind of boiled down to the last hundred days. Here are so, uh, Kellyanne Conway is probably going to be making even more appearances on our TVs. Uh, she did the same thing, obviously in the run up to the 2018 elections, trying to go out there and get people to vote for Republicans. Then she had to disappear for a bit, but now she’s back. And yesterday she went on Fox news with host Sandra Smith to drop some bombs against Joe Biden. The only problem is that the bomb she was dropping were complete duds because Sandra Smith on Fox news had to call Kellyanne out for lying about Joe Biden and Conway. Wasn’t too happy about that. So take a look at what happened during this exchange.

Then he can also take those tough questions for the press. One last thing, I didn’t hear Joe Biden, Kamala Harris, John Kerry, anybody talk about this virus in a meaningful solutions based way for months while we were here around the clock. If they’ve got a good idea, Sandra, they shouldn’t be sitting on it until November 4th. He’s got all their country. He’s got a plan. This campaign website. Yeah, sure. You can read through it. They ask. Yeah, I read through it. It’s not much of a plan. Yeah. Yeah. Well, we’ve done 70 million tests here and we have, and we’re testing and nursing homes. We’re testing on campuses as they want. We’re testing, you know, testing is available point of care tests. I’m grabbing tests to test. So I read this plan. It doesn’t make any sense. Thank you.

I love this clip so much because Kellyanne Conway was totally peak Kellyanne. Cause at first she’s like, yeah. Oh, you’ve got such a great plan. Why don’t you tell us what it is? They, they, they did actually. They did tell you what it, Oh yeah. Surely told us what they did. No, no, no, no. It’s for real, like it’s on their website. Yeah. I know. I’ve read it on their website. Cool. But you did a, you did just say that they didn’t have a plan. Um, but now you’re saying they do have a plan and you have read it and you know where it is. So what’s the problem. You were mad that they didn’t release a plan, but then at the end of it, you admit that they released a plan. You just didn’t like it. But in between that, you say that there’s no plan and it’s not on their website.

But then again, at the end, you also admitted you seen it on their website. So Kelly Ann I’m, I’m kind of with Sandra Smith here. I’m not sure exactly what your problem is. Cause you just lied like two, three different times in five sentences and you were the, actually the one who really contradicted yourself there, you’re the one who outed your own lies. Um, but to be fair, uh, I do to a small degree, have to kind of go with Kelly Ann’s point here just for a moment is really devil’s advocate. Um, because here’s the thing I would get. Yeah.

Lots of angry people back in 2016. Cause I would do videos and I would say, well, what’s Hillary Clinton’s plan for this. What’s her plan for this? Why is she not out there talking about it? I always made sure I said that part too, because that was important. And people would say, it’s on our website, it’s on our website. You want to know, we’re planning to go to our website, go to our website. Is he actually, here’s the thing, folks. That’s not our job. I know they have these websites so that people go to them and they can read their plans. But that’s, if you want more information, see most Americans out there, they’re not going to go to these websites. They didn’t in 2016, they didn’t in 2012 or 2008 or in any of the midterm elections. Since that, they just, they really don’t.

Usually the people who go to those websites are people like me because we do it for research so that we know what these people’s plans are. The question is why are they not out there talking about them to the public? Because if you do not communicate that to the public, in a speech, in a press conference, in a video release, most people are never going to know. Most people are straight up never going to know because they’re not going to take the time to go to the website. So I think Kellyanne, believe it or not actually has a bit of a valid point in between all of her lies. And the point is Biden, go out there and start articulating your plan. Because especially when we’re dealing with the pandemic, the American public wants to know what you can do and why it’s going to be better than the catastrophe we’ve seen so far. It’s not hard to do that. I fully think you can do that. And I, 100% think that you need to get on that immediately.