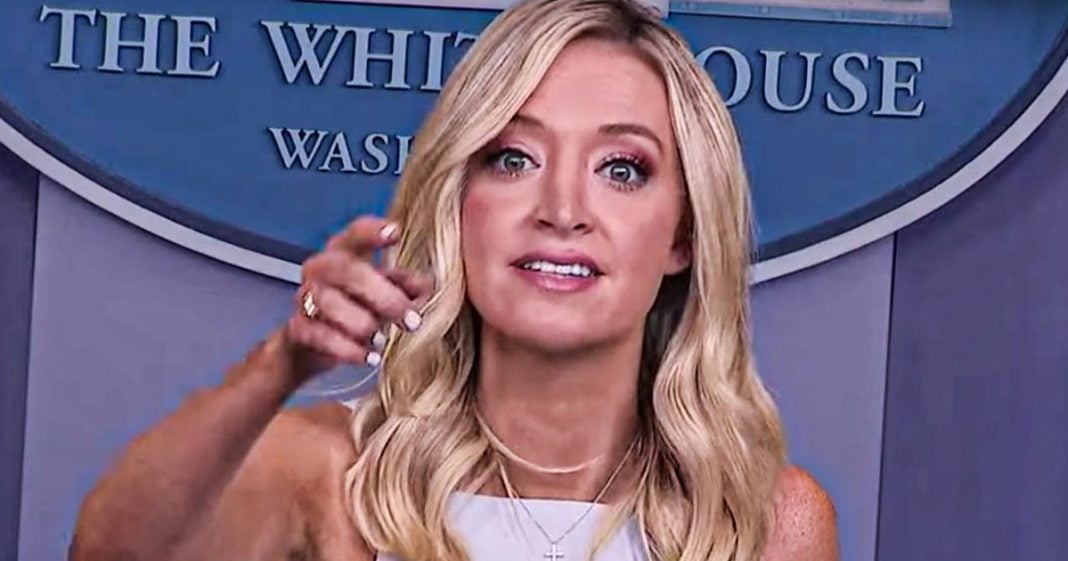 White House Press Secretary Kayleigh McEnany refused to say that Trump would definitely leave the White House if he loses the November election, and instead suggested that the President would “wait and see” if that’s what he was going to do. This caused quite a stir on social media, with people freaking out about Trump possibly staging a coup. The truth is that such a thing can’t happen, as Ring of Fire’s Farron Cousins explains once again.

You know, you’d think it would be an easy question for anyone to answer. Will the president accept the results of the election kind of straightforward? It’s almost a trap question because it is so simple, but yesterday white house press secretary, Kayleigh McEnany fell into that trap and it actually looked like she intentionally fell into that trap just to create a little bit of controversy during the white house press conference, McEnany was asked straight up, is Trump going to accept the results of the 2020 election? And McEnany refused to say whether or not he was going to do that, do going to do the thing that he has to do. As she said, we’re going to have to wait and see here’s the exchange

Kayleigh, just to follow up, um, on, on what my colleague said over there with regard to the president saying, make sure to get out and vote. Cause the only way we’re going to lose this election is if the election is rigged, this, the president is the president saying if he doesn’t win this election, that he will not accept the results unless he wins. The president has always said, he’ll see what happens and make a determination in the aftermath. It’s the same thing he said. Uh, last November, he went to free election, a fair election, and he wants confidence in the results of the election. Particularly when you have States like Nevada doing mass mail out voting, uh, to their voting rolls. And when they tried this in the primary, it was a massive failure. Ballots were piled up in trash cans. Ballots were pinned to apartment, dark boards. And with that being the system, uh, the president wants to take a hard look at this and make sure that these are fair, uh, election results and not subject to fraud.

Again. I think she did that intentionally. I think she knows just as the rest of us should know that he doesn’t have a choice. I honestly can’t remember how many times I have had to explain this before, but I’m going to go ahead and explain it again. Why? Because everybody on social media yesterday was freaking the hell out because she wouldn’t say that he would leave office or that he was going to accept that. No, my God then what do we do? We don’t do anything. Cause we don’t have to do anything. But to see people like, uh, you have Joe Walsh, Michael McFaul, a former ambassador to Russia. You have actually high ranking and well known Americans freaking out saying, Oh my God, this is terrible. It’s not terrible. McEnany knows exactly what she’s doing. She is playing to the Republican base. She is playing to Trump’s ego.

She doesn’t want to even consider the possibility that he might not win and he doesn’t want her to consider that. So she goes out there and she says, stupid things for shock value. Donald Trump has no choice. If he doesn’t win the 2020 election, he’s leaving the white house, whether he wants to or not, whether he doesn’t under his own power or not, because regardless what he does following that election, if he doesn’t win, Joe Biden will still will be sworn in on January 20th at noon. There is nothing he can do to stop that. And according to the us constitution, Trump’s term ends January 20th at noon. Even if Biden doesn’t get sworn in, even if nobody gets sworn in, it would just go down the line of succession at that point, because his term ends, it ends, ends, ends, ends, ends, nothing anyone can do to extend it. If he’s not re sworn in, okay, that’s how that works. So immediately upon his term, expiring something, somebody else is sworn in and that person is the president.

And Trump is the former president. He is no longer the commander in chief of the armed, armed forces. He is no longer in charge of anything except for the secret service detail that will be appointed to him to go about and protect him for the rest of his life. The next president should Trump say, well, I’m not leaving the white house. All they have to do is say, cool, cool. That’s really awesome. Hey, take him away. And you know what they’ll do, they’ll take him way because that’s a direct order from the president of the United States and the likely get court-martialed, uh, if they do not do that. So yeah, that’s how that works. That’s how that plays out. So let’s all stop freaking out just because Kayleigh McEnany played everybody for shock value.