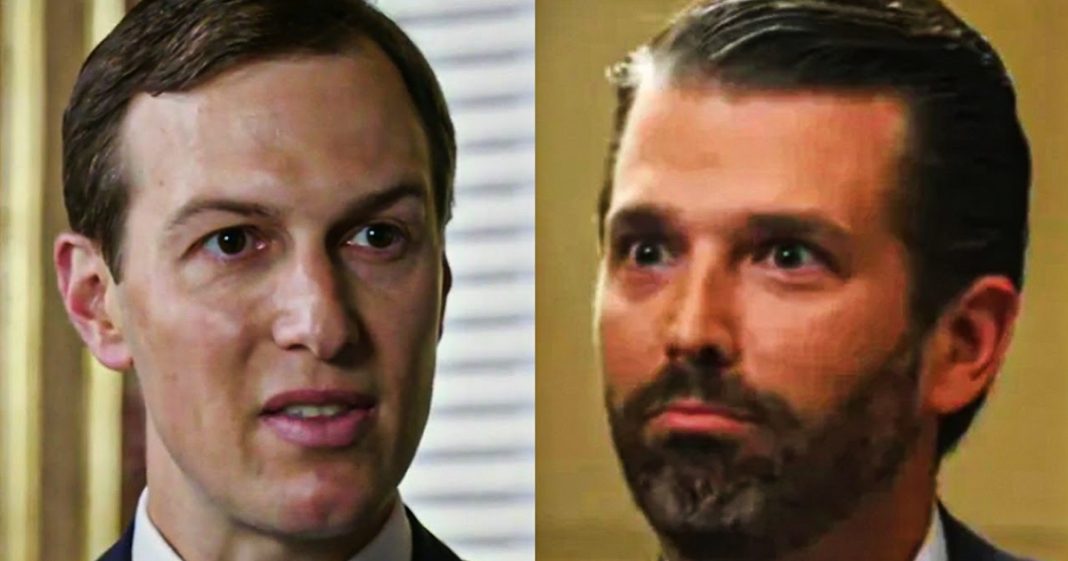 According to a shocking new report released on Tuesday, the Republican-controlled Senate Intelligence Committee actually referred Donald Trump, jr., Jared Kushner, Steve Bannon, and several others for criminal prosecution. The Senate panel had reason to believe that all of these individuals lied during their testimony to the committee about the Russiagate scandal. Ring of Fire’s Farron Cousins explains what’s happening.

So a week ago, there was some news regarding the whole, uh, Russia gate scandal that a former FBI lawyer had doctored up. One of the documents, uh, that was submitted in order to obtain a Pfizer warrant against Carter page. And the people who believe that, uh, Russia gate was nothing but a hoax and a conspiracy to Alsace Donald Trump, they were celebrating, they thought this was the smoking gun that they needed, uh, to show that the whole thing was a total farce. And then as luck would have it, the Republican controlled Senate, uh, went ahead this week and released their findings on the Russia game issue, the investigation, the people that they got testimony from, and wouldn’t, you know, it, they actually found even more evidence of wrongdoing from the Trump administration and the Trump campaign, 2016, they found more wrongdoing. Then the Mueller investigation did quite a shocking report put out by these Republicans.

Um, they did find interference. Uh, they strongly hinted that there was collusion, but here’s the thing about that stuff. See that stuff doesn’t know, certainly matter to the public cause everybody’s already made their minds up on it. Either you think that it happened or you are convinced that it didn’t, that’s kind of where it is. Nobody is going to be changing their mind based on this report. And that is unfortunate. Uh, but here’s the interesting thing that I found in the report. This, this was to me, the most interesting. And it was that the Senate intelligence committee actually referred several individuals for a criminal investigation and potential prosecution because they fully believed that these individuals broke the law and those individuals, by the way, were Donald Trump jr. Jared Kushner, Steve Bannon, Eric Prince and Sam Clovis, the Republican controlled. And I’m going to keep calling it that Senate intelligence committee received testimony from all five of these individuals.

And after the testimony, after they heard from everybody else, they picked out these five and said, we believe these five men broke the law law by lying to this committee. And here’s, what’s funny is that some of these men were contradicted by each other. You know, it was the closed door hearing because they thought that was going to protect him. So nobody knew what the other one got to say. And one instance was that Eric Prince talked about that infamous meeting that he had in the Seychelles with a Russian official, he claimed that he immediately went back and brief Steve Bannon on it. And then when they, Bannon, Bannon said that Eric Prince never had this conversation in the Seychelles, it didn’t happen. You all are lying fake news. And then they’re like, yeah, dude, he told us he already briefed you on it. Um, what, what, what do you want to do with that? So that’s one of the ways they were able to get Bannon. Um, and then with Kushner and Trump jr. It’s a little more unclear as to who contradicted them with their testimonies.

But they do mention that their con uh, testimonies were in fact contradicted by other people who spoke to the committee. Now here’s the thing. Yeah. These individuals, The Republicans and Democrats on this committee, we’re all in agreement that yes, these men lied. That is illegal. We’re sending it to the justice department, justice department to do your thing. Criminal investigation prosecutes these people justice department run by a bunch of Trump. Sycophants said yeah, sure thing. Let me go ahead and put this in the file here. Oh no, I’ve lost it. Oh, well the question is not why the DOJ didn’t prosecute. We know why the DOJ didn’t prosecute. The question is why’d they lie? Hmm.

That’s the question. I would like some of these, uh hoaxers to answer if nothing bad happened, if nothing wrong happened, why did everybody lie about it? Why did they purger themselves, like break the law by lying about it, like willing to commit a crime to cover up what actually happened? Kind of tells me that what they’re covering up is probably a worst crime than, uh, than perjury you’re lying under oath. Right? I mean, it would seem that way. Otherwise these guys are just breaking the law for fun during their testimonies. Right. That’s a question I would like answered personally. And I’ve said this many times, uh, and Mike Papantonio with ring of fire here has as well, was the Russian interference. Absolutely. 100%. Is that the reason why Donald Trump won the election? No, it is not. Does that mean that every horrible thing that happens with this administration that Putin is pulling the strings? Absolutely not.

But you have to kind of find that healthy medium, where you’re able to accept reality. Like what we saw in this Senate report and say, yeah, there was interference and there was criminal activity by the Trump administration. And at the same time, not see Russia as this big horrid boogeyman, who’s behind everything bad happening in this country. Today, there is a healthy medium between the two and I hope that more people are able to find it.