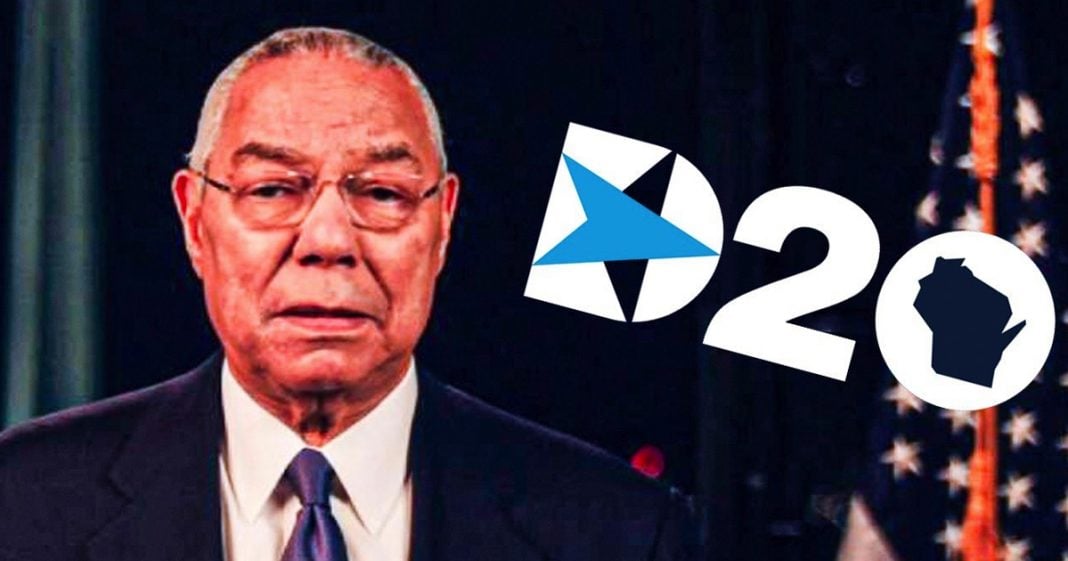 The Democratic Party is clearly suffering from a massive identity crisis, and their roster of guests at this year’s DNC proves it. Rather than hyping up progressive up-and-comers like Alexandria Ocasio-Cortez or Rashida Tlaib, the Party has decided to parade out war criminals from the Bush administration like Colin Powell. There is something seriously wrong with this picture, as Ring of Fire’s Farron Cousins explains.

Well folks, we are now halfway through with the democratic national convention. And one thing is abundantly clear. The democratic party is far more comfortable having war criminals from the Bush administration than they are Progressive’s in their party. What happened a Tuesday evening was that it was announced that Colin Powell, former secretary of state under George W. Bush for the bushes first term in office, uh, the guy who went to the United nations and, uh, swore up and down that there was this uranium and the aluminum tubes in Iraq, they were mega these missiles that, uh, turned out to be a total fabrication and Colin Powell knew it. Um, that guy, uh, it was announced that he was going to be the speaker at, Oh my God. That’s so cool. It’s so wonderful. We got Colin Powell, Republican war criminal. Who’s going to talk about how great Joe Biden is, uh, also AOC it’s your night to have your 60 seconds. So come on, come on. Colin pals, wait and AOC. Let’s go. Let’s go. Let’s go.

That’s what The party essentially did on Tuesday evening Also, by the way, uh, now, so they got a video of Cindy McCain. John, McCain’s a widow Meghan McCain’s mother, and she’s endorsing Joe Biden. So that’s, that’s cool. That’s another Republican, um, coming out for Biden because that’s all the democratic party seems to care about right now is how many Republicans, regardless of their disgusting history, how many Republicans can we get to come out and endorse Joe Biden? Because in their brains, you see the, the geniuses running the democratic party. They think that what this is going to do is show these, you know, moderate Republicans out there in suburbia that, Oh, Hey, maybe, maybe I to a moderate Republican should vote for Joe Biden

Did that work for Hillary. By the way, when you ran her as a moderate. No, no it didn’t. So it doesn’t matter if you trot out a war criminal like Colin Powell, it doesn’t matter if you trot out a John Kasich who helped destroy unions, suppress votes and suppress the white or rights of women in the state of Ohio. Doesn’t matter how many times you do that. This is not going to win over the people that you think it’s going to win over. But what you’re doing instead is pushing away, excuse me, pushing away. The people that you should be embracing AOC is the future of the democratic party. John Kasich is a guy who’s latching his wagon onto it at this very moment because it’s been official to him. And the second he gets, the opportunity is going to stab every single one of you in the back that’s what’s going to happen with casing.